1. New China border posts to monitor India project: Beijing: China hasNestablished its highest border police station at 5,373m above the sea level on its border with Bhutan in Shannan prefecture. It has also set up an allfemale police station in Tibet’s Nyingchi Revive Her Drive prefecture, which borders Arunachal Pradesh in India. [TOI p9]

3. Unlike winter session, NDA not to boycott PC, Will Take On Minister

Over Federalism Debate: New Delhi: Preparing to take on the UPA

government as Parliament opens for the Budget session on Monday,

opposition NDA on Sunday worked out an aggressive strategy with the

central university will come up in Gaya, not Motihari: NEW DELHI :

5. HRD minister Kapil Sibal has made it clear that the permanent campus of

the Central University of Bihar will be in Gaya. In a letter to chief minister

Nitish Kumar, he reiterated the rationale behind the Centre’s decision and

6. NDA to raise federalism, NCTC issues : New Delhi : It may not be

giving much consideration to the concept of an alternate front, but the BJP

platform against the UPA.[IE p3]

7. Mamata may oppose Food Bill over cost-sharing : New Delhi : After

opposing the UPA government, in which her party is a partner, on the

issues of foreign direct investment in retail, plan to set up National

Counter-Terrorism Centre, and hike in prices of petroleum products, West

the Centre over the ambitious food security law. In doing so, she would

8. No coercion, quash FIR: Maxis to CBI : NEW DELHI: Armed with a

has approached the Central Bureau of Investigation (CBI) to deny the

coercion allegation in its 2006 acquisition of Aircel Ltd and submitted

9. Woman power goes up in UP Assembly : Lucknow : The newly

constituted 16th Assembly of Uttar Pradesh has 35 women members, that

10. Suspense over key UP posts, babus wait and watch : LUCKNOW:

The bureaucrats of Lucknow are living in suspense. Who gets preference

in the new regime over the key postings remains the key question. With

government, selection of officials will be a crucial process in the coming

it contested in Uttar Pradesh. In 247 of those, or about 68 per cent of its

seats, the Congress candidates even forfeited their deposits. The BJP

fared only slightly better. Of the 398 candidates fielded by it, 230 lost their

deposits, working out to 58 per cent of its candidates.[IE p1]

Congress’s chances of winning seats by securing votes from elsewhere,

the ruling parties in at least three states-Odisha, Karnataka and West

Bengal -are looking for suitable independent candidates to contest for

Karnataka chief minister B S Yeddyurappa’s rebellion fizzled out even

before he could fire a shot at his Hubli rally. Following BJP’s Dharmendra

Pradhan’s advice, Yeddyurappa said he won’t quit the party. Instead, he

would work as a party worker and tour the state to strengthen the BJP.

In the last municipal elections, many Resident Welfare Associations

their own candidates but had failed miserably. This time, political parties

are wooing the same candidates to join their fold.[HT p2]

elections to the Lok Sabha may be possible following the reverses

suffered by the Congress in UP, Punjab and Goa, and if the UPA allies

become recalcitrant. But nothing certain can be said at this stage, feel

performance in UP has upset its parent body, the RSS. Its mouthpieces

Just like the Congress, the BJP is suffering from “a disconnect with voters”

in Uttar Pradesh, the RSS has opined. Commenting on the poor

mouthpieces Organiser and Panchjanya, the RSS has said it will be

18. Mulayam to invite regional leaders at swearing-in : Lucknow : After

Looking for a bigger role for himself, he will set the ball rolling at the

swearing-in ceremony on Thursday. The occasion will be used to revive

the possibility of a Third Front in the country.[IE p3]

the past two years, the BJP-led MCD has not increased property taxes in

the city. The party hopes to use this fact as a bait for voters. This, despite

services : NEW DELHI: With municipal elections just a month away, the

BJP, which rules the MCD, has not been able to fulfill many of its promises

made in the last elections held in 2007. These promises include the

assurance to provide door-to-door collection of garbage among others.[HT

With regional parties, including ally Trinamool Congress, gearing up for a

assembly polls, the UPA government is bracing for a stormy budget

Akhilesh, Badal: Kolkata/New Delhi: It took a flurry of phone calls on

and then by finance minister Pranab Mukherjee, for West Bengal chief

23. New front may shape up at Badal’s swearing-in: Chandigarh: The list

unhappy with the Centre. [TOI p14]

mining mafia, the police on Sunday arrested a person for firing at cops

probing illegal sand mining, even as a Morena BJP leader was held for

Shehla Masood, who was murderd in August last year.[IE p2]

26. Akhilesh tries to rein in young brigade: Lucknow: A day after he was

named the youngest chief minister of UP, Akhilesh Yadav on Sunday sent

out a reassuring message to SP veterans by appointing Rajendra

Two Mths On Cards: Mumbai: Get ready to pay more when you fly. A

endangering life or safety of others”. [TOI p1]

29. I don’t need a post, says yeddyurappa : Hubli : After being felicitated

development of north Karnataka” amid a mammoth gathering at the Nehru

30. Will SP push Mulayam for PM post? : NEW DELHI: Within the

Samajwadi Party, the way for Akhilesh Yadav’s acceptability as CM is

could make it after the next Lok Sabha poll, whose timing is being hotly

include the Subramanian Swamy-headed Janata Party into its fold. A

the eve of the Budget Session of Parliament.[AA p3]

Ambedkar, grandson of Dr Babasaheb Ambedkar and a seniorleader of

the republican movement in Maharashtra, could become the Congress’

Questioning the BJP’s performance in the recently held Assembly polls,

including in Uttar Pradesh, the RSS said the saffron party’s performance

constituents have been maintaining a studied silence over talk of a

“third front“ now, the party feels such a bloc is very much possible after the

within the government and opposition notwithstanding, the drubbing in the

the Centre’s decision to revoke the order banning cotton exports.[TOI

charges that he was involved in anti-party activities.[The Hindu p5]

39. BSP offers support to Cong in hill state : NEW DELHI: In a heartening

development for the Congress in Uttarakhand, the three MLAs of the

the party form the next government in the state.[HT p1]

Prime Minister Manmohan Singh on Twitter, now you can watch him on

YouTube. On Sunday, the Prime Minister’s Office (PMO) expanded its

42. Kovur bypoll and acid test for Andhra Congress : Hyderabad : The

by-election in Kovur Assembly constituency in Nellore district is being

Dehradun : A whisper campaign that was going around in political circles

here for the last few days got louder on Sunday, with a new name being

on the mining mafia behind a slew of attacks on police and civic officials,

dacoit who is a lynchpin of the sand mafia, and BJP leader Hamir Singh

Patel of Morena, who assaulted officials to free two tractor-trolleys

45. Games scam: Charges to be framed : New Delhi: A trial court is going

to frame charges on Monday against six people, including four MCD

officials, for their alleged role in a corruption case involving street lighting

Chief Minister Mayawati still smarting under the defeat in the assembly

local bodies polls due to be held later this year.[The Hindu p5]

PRASAD : Kudos to the Uttar Pradesh electorate for eliminating fears of

horse-trading by according absolute majority to the Mulayam Singh

Yadav-led Samajwadi Party. With SP, however, fears of yet another spell

of ‘goonda raj’ (rule of the goons) have returned. Violence, it seems, is

synonymous with SP in power, as its intolerant supporters started

reminding us soon after the party’s victory. [TOI p2]

Cricket again came under a cloud as the Sunday Times, London, carried

World Cup semifinal between India and Pakistan at Mohali was rigged. 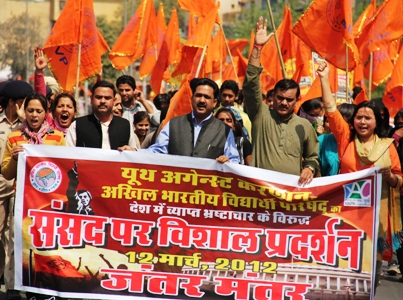