New Delhi: Railway minister Dinesh Trivedi appeared to be on the brink of losing his job within hours of presenting a budget that was hailed by Congress as “forward looking” but savaged by his own party, Trinamool Congress, as “anti-people” for proposing an across-the-board passenger fare hike. [TOI p1]

1. Farewell to Trivedi after Fare Hike, Minister may Resign Today as Didi Fumes: NEW DELHI : Railway Minister Dinesh Trivedi’s maiden budget triggered a full-blown crisis at the Centre when his own party, the Trinamool Congress, termed across the-board passenger fare hikes as a “hostile act” and asked the PM to sack him. [ET p1]

3. Mamata gets her way, Mukul Roy to take over : New Delhi : A daylong

drama over hike in passenger fares ended with Railway Minister

Dinesh Trivedi Submitting his resignation to the Prime Minister Manmohan

Singh. In an unprecedented move, the incumbent was shown the door by

his own party after presenting the Rail Budget. The UPA caved in to

4. After a decade, all tickets to cost more: New Delhi : Dinesh Trivedi on

decade — he hiked passenger fares across the board, following up on the

increase in freight charges announced immediately after the recent round

6. Mamata Banerjee may have decided to stay away from the Akali

swearing-in on Wednesday, but she sent a clear message that she valued

ties with anti-Congress forces when she deputed senior leaders Mukul

momentum within the party. In Andhra Pradesh, West Bengal and

Maharashtra, a significant section of the local leadership has reportedly

nominations instead of candidates from other states.[HT p11]

9. Inquiry Commission yet to submit interim report on Adarsh Scam :

of Inquiry into the Adarsh housing society scam would be submitted.[The

10. Vilasrao Deshmuk set to be named in CBI’s Adarsh chargesheet :

people accused of wrongdoing in the Adarsh Housing Society scam when

the CBI files its chargesheet in about two months.[IE p1]

11. Warrants for 3 Iranians over attack on Israeli diplomat : New Delhi : A

Iranian nationals in the case.[IE p1]

seats for which elections are scheduled on March 30.[HT p11]

13. UPA infighting is BJP ammo : NEW DELHI : As soon as the reaction

started pouring in for the Railway Budget on Wednesday, the Opposition,

mainly the BJP, was the one feeling quite elated. For the BJP, the Railway

Budget was another ammunition against the UPA, given by none other

14. Lokpal in 1st Half of RS Session, Govt may move amendment to keep

Lokayuktas out of legislation’s ambit, to convene all-party meet

soon: NEW DELHI : The Opposition, acting in sync with the Trinamool

Congress, a component of the ruling UPA at the Centre, on Wednesday

“first half of the budget session itself.’’ [ET p3]

Rajya Sabha, the Biju Janata Dal has joined hands with BJP, JD(U) and

a scathing attack against Defence Minister and Congress Working

the role of a “silent sage” whenever issues of corruption came up.[Pioneer

chairman Nripendra Mishra, who was called as a prosecution witness in

Access Services Licence (UASL) guidelines were issued by DoT on

December 14, 2005, when Dayanidhi Maran was the minister of

balance in Uttarakhand has seen dissenters make a careful assessment

of their strength. With the Congress interlocutors stopping short of

effecting a change in the CM candidate, the party hasn’t seem to have

mounting for Congress : New Delhi: Ally pressure went up a notch for

20. SP men beat up Dalits near Maya village in Dadri: NEW DELHI: The

change of guard in Lucknow on Thursday -when a Samajwadi Party

families in the Dadri area, where outgoing chief minister and BSP

3. No one needs to live in fear, says Akhilesh,promises honest govt :

said his cabinet would initially be small but could be expanded later.

Yadav, 38, who will be sworn in on Thursday, said his priority would be

law and order and industry. “I am here to serve, not rule“, he said.[HT

days after coming to power in Uttar Pradesh, Samajwadi Party on

by Enforcement Directorate into the assets of the outgoing CM.[HT p10]

23. Uttarakhand stalemate drags on as Rawat digs in : New Delhi:

leader Harish Rawat staying put at his residence and the party

the rebel camp showing signs of reconciliation. “I will not be the cause for

any crisis either in Dehradun or in Delhi. My supporters wanted me to be

chief minister but it is not necessary that all wishes are always fulfilled,“

Dehradun : A day after he was sworn in as the new Uttarakhand Chief

Minister, Vijay Bahuguna said today that it was the support of the seven

Buoyed by the historic success of breaking a 46-year-old jinx, the SADBJP

austere steps for the debt-ridden state, blowing up roughly Rs 3 crore on

Wednesday accused Congress of “sabotaging’’ the Jan Lokpal bill even as

it prepared for a protest dharna for a strong whistleblower’s act. The

ombudsman, Lokpal, in Rajya Sabha during the first part of the

the upcoming MCD elections. Zia-ur-Rehman, who is facing trial in the

2008 Delhi serial blasts, filed a petition through his counsel before

defamation and claim for damages on chief minister Sheila Dikshit for

33. BJP-SAD alliance on thin ice over sharing of seats : NEW DELHI: The

electoral alliance in Delhi seems to be on a shaky ground. Recent

meetings between the two parties -which have been fighting elections

serious allegations of corruption against her government by attacking BJP

leaders without having proper facts and figures.[HT p4]

35. BJP MLAs unhappy over candidate selection : New Delhi : Most of

selection of candidates for the upcoming municipal polls complaining that

they were not being consulted.[The Hindu p3]

Delhi: Defying the directions issued by the senior party leadership to

Rajesh Talwar, a Special CBI court extended his bail in the Aarushi-

appear in court within 30 days, as directed by Allahabad High Court on

Tuesday. The hearing in the case was adjourned to April 11 by CBI

39. Kingfisher to cut overseas flights : New Delhi : In a bid to contain

announced that it would be curtailing its international operations The

airline, which uses the wide-body Airbus A-330 aircraft for flights to

320 for flights to cities in South Asian region, may prune its flights to the

Thu Mar 15 , 2012
Nagpur: March 15: Some sort of grievances might be there among local people regarding issues such as water distribution, state borders, language, etc but due care must be taken so that the feeling of hatred and disintegration will not creep in among the masses. Rashtriya Swayamsevak Sangh is going to […] 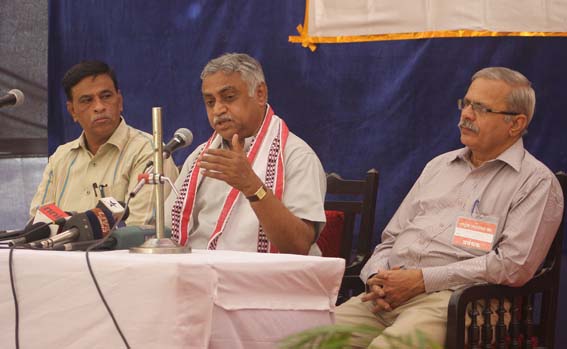