Rather than dismissing the total UN report outright that ridicules Bharat’s democracy, Union Home Minister in an official statement says, “There are some positive & some negative statements in the UN report. Certain sections in AFSPA need amendments…”

When the UN surreptitiously (& thinking that it was the UN’s most diplomatically strategic move) got Bharat Govt to vote against Sri Lanka in the UN for atrocities on the minority Tamils there, it was clear that the next step will be AFSPA in Bharat because that is exactly what Pakistan, China & America jointly want. Atrocities on Tamils inSri Lanka& their planned ethnic cleansing there are completely different from the Jehadi elements trying to break parts of Bharat likeJammu&Kashmir,Assam, Tripura, and Manipur with the help of other Jehadis from Bangla Desh & Maoists supported byChina& some western nations.Pakistanhas claimed in the UN Security Council & the UN General Assembly thatKashmirwas theirs. Bharat has time & again taken a correct stand that Jammu- Kashmir, Assam, Manipur, Arunachal, Tripura, Sikkim etc are Bharat’s integral parts & nobody has any right to even mention them in the international forum.

But today when the UN asks Bharat to repeal AFSPA which actually is successful in curtailing the Jehadi infiltration in Bharat from POK & Pakistan, which has been able to keepKashmirbusinesses alive; our learned Home Minister gives a clerical analysis of what is in the UN report!

We have certain basic questions: If the UN claims to be the world care taker (which it is not really) then where was the UN when millions of Kashmiri Pundits, Sikhs faced Ethnic Cleansing inKashmir1990? Where was the UN when the Hindu women were striped in Kashmir by Jehadis, many raped, killed & some were released with the lines written on their breasts – ‘Hindus, leave your women behind for us & you get out ofKashmir’? Since then millions of Kashmiri Pundits, Sikhs have been staying in shabby conditions in the camps without any human rights, voting rights, without any hope to get their land, homes, and temples back. Where has been the UN all these years? Millions of Hindus are chased away, many killed, converted forcibly in Pakistan & Bangla Desh. Hoards of them are fleeing into Bharat where they have been staying in temporary shelters with no help from the Govt. Where is the UN? InMalaysiaon the streets thousands of Hindus were brutally lathi charged only for being Hindus, their temples razed to build mosques – where is the UN? InAssamKarbi Anglong & other original Tribes have been facing massacre even now & living in temporary camps in fear. Where is the UN?

The UN speaks of democracy & that AFSPA has no place in democracy. UN’s favourite sponsorAmericasends army of millions in many nations – kills innocent kids, women & old people. Where is the UN? The UN has no right to ridicule Bharat & Bharat’s democracy using fake reports created by the likes of Dr Fai & some Arundhati Roy who have stated stands thatKashmirdoes not belong to Bharat. The UN Special Rapporteur Christopher Heyne who claims that police atrocities in disturbed areas in Kashmir, Assam etc are affecting women & minorities, should first need to learn WHO is the minority in these areas. In Rajouri, in a school local Muslims suddenly started doing Namaz in 2 class rooms kicking students out, in a few days they claimed that because they do namaz there, that place is a mosque! This is what affects the Minority, women & kids in J&K; not police or army behavior.

Sat Mar 31 , 2012
Kolar, Karnataka March 31: The Court of additional division at KGF Kolar district has declared its verdict on a case of forcible conversion today. As per the judgement given by Additional Civil judge H Gopalakrishna, 2 accused gets 3years  6months of imprisonment and fine of Rs 6000, other 9 members […] 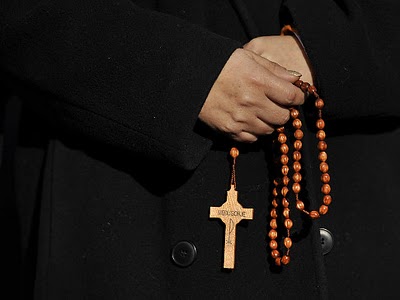