by Dr Pravin Togadia in ORGANISER

Recently while traveling a young suited booted professional approached me and said, ‘Jai Shreeram’. I pleasantly looked up and he continued, “I studied in VHP run High School, did well in the board exam and with VHP support I went on to be an MBA and now I am holding a good post in an FMCG.” The passenger sitting next to us exclaimed, “Oh! VHP is in education too? I thought that you guys did only agitations.” Before I give him the details of our service work in education, health, vocational training, the same smart youth rattled the details of VHP’s total educational projects 50628, 1257 schools, 608 health projects including hospitals, mobile dispensaries and health care centres; girls hostels 32, boys hostels 108,  orphanages 45, Self-Help Groups for women 633, vocational skills for youth centres 257 and other social help projects such as legal aid, old age homes, etc are 1205.”  And then he added, “This large-scale social service by VHP is important and equally important are the agitations that are done to defend Hindus and Hindu Dharma. I am proud to be associated with VHP.”

This is not the one off incident. Over 50,000 students who have studied in VHP High Schools, are now placed at various respectful places in various fields like science, technology, corporates, health etc. When they came to our schools, they were either from very poor families or from Vanvasi areas. Now various high schools have over 6000 students. When nobody dared to enter Nagaland, VHP opened hostel in Halflong area of Nagaland 40 years back and now 10,000 Nagas proudly call themselves Naga Hindus. This has prevented massive conversion in the area. The same is for Odisha to Chhattisgarh and Tripura to Maharashtra.

When Vishwa Hindu Parishad (VHP) begun on Janmashtami on August 29, 1964 in Mumbai in a simple Sandipani Ashram, Hindu well-being, restoring dignity for Hindu Dharma, protection of Hindus, spreading Hindu Dharma glory nationally and internationally etc were part of the goals. The objective of the VHP was to organise – consolidate the Hindu society and to serve – protect the Hindu Dharma. A strong, effective, enduring and an ever increasing presence of VHP is now seen in lakhs of villages and towns in Bharat as well as globally.

Today when VHP will be completing 50 years coming year, VHP is present in all 450 (Government) districts in Bharat and also in 5868 Prakhands (Taluk, etc) working through its 51,374 committees. VHP has activities of similar types in over 100 countries. This is not mere data; people work here day and night for Hindu well-being.

VHP has always treated untouchability as a big social evil. Through the consistent efforts at eradication of social evils like untouchability, VHP is absolving the Hindu society and rejuvenating it to express its inherent Hindu Unity and Dignity. Respected Shankaracharyas and Sadhu-Saints in VHP conclave have passed a resolution to eradicate untouchability. As a part of it Pujya Shankara-charyaji went to Kashi’s Domb King’s home and ate with him. Today, VHP has a special social equality project named ‘Samarasta’ in which VHP workers make people from other castes ‘Hindu Mitra (Friends)’ who are invited for all religious functions and treated like close family members.

Globally, with VHP’s efforts, Hindu Dharma is taught as a part of school syllabus in Australia and UK with Government sanction there. This helps others to know facts about Hindu Dharma and also helps Hindus settled there for generations to get their children know of their glorious Hindu traditions. VHP runs interactive summer camps in many countries including the USA for the children and youth to tell them about Bharat’s glorious culture and Hindu Dharma.

Cow protection is an important part of VHP activity. Bajrang Dal workers are always ahead in Gou Raksha. Many states now have law prohibiting cow butchering. VHP has worked tirelessly to get them pass this law. A lot needs to be done to get other states and Centre even pass the law now. To save non-milking cows which are unaffordable for poor farmers, VHP runs over 515 Goshalas all over Bharat. The late Moropant Pingleji had a great vision of making consumer products made from gomutra (cow yrine), gomay (cow dung) and also from cow ghee, curd and milk. These panchgavya products are now made by many Goshalas. Products like soaps, shampoos, medicines etc at par with any MNC are now being used by millions of Hindus. Moropantji always felt that as many consumer products from panchgavya are used as many liters of gomutra and as many kilos of gomay would be used, farmers can earn from them and cows would be saved. VHP Gouseva Gou Raksha also holds interesting exams for school kids on Gou Mata!

Defending Hindus and Hindu rights have been VHP’s one of the objectives. Ayodhya’s Ram Temple, Kashmir’s Amarnath, South Bharat’s Rameshwaram Ram Sethu and stopping reservations to Muslims in jobs / education, / loans are the larger agitations VHP did and have been following up. Amarnath pilgrimage now gets over 10 lakh people annually where no Hindu was safe earlier. Rameshwaram Ram Sethu has been protected with VHP’s continued legal and social fight. Hon. Supreme Court of India has discarded all proposals and committee reports on Muslim Reservations terming them ‘unconstitutional’ due to VHP’s constant socio-legal fight.

Apart from these national agitations, VHP also takes up local issues of Hindus from all states. Recently when a Scheduled Caste minor girl was gang raped and killed by Muslims in Pratapgarh district of UP, VHP dared the Uttar Pradesh government and got the police file an FIR and arrest the culprits. They did it after 15,000 Hindus of all castes from surrounding villages did democratic peaceful march to the police station.

There are umpteen such examples like Kokrajhar Assam where Bangladeshi infiltrators attacked local original Vanvasis and burnt their houses. VHP not only opened the relief camps but also pushed the polity to agree that 1951 would be Citizen Registry cut off and not 1971 as the infiltrators came in then. When North East Indians were being chased away from all parts of Bharat after Kokrajhar incidents, VHP, RSS together stood with them, protected them and those who still wished to be at their homes in NE, helped them with special trains, protection  and food supplies on way. From Marad, Kasargoud at Kerala to recent Kishtwar incident in Jammu & Kashmir all states, VHP has been holding Hindu hands many ways.

To help Hindus in routine emergencies like medical, travel, legal etc Hindu Help Line runs a 24X7 call cantre through which Hindus get emergency help all over Bharat. We wish to extend it to globally now. Recently when Hindus from Pakistan fled and came in Bharat, VHP helped them settle and now taking up the issue of their safety and status. ‘Hindu Ahead’ project has excellent youth participation with the appeal of ‘Aware Hindu and Active Hindu’.

Before VHP was established in 1964, Hindus did give fight on their own globally and in Bharat. Now nationally and globally VHP has become a rallying point for Hindus for protection, prosperity and dignity as a Hindu. Many other Hindu organisations followed VHP footsteps and are now active to help Hindus. VHP works with many of them when it comes to Hindu issues.

With 43000 primary schools in Vanvasi areas, VHP has achieved what many governments could not. Preventing mass conversions and not letting separatist movements in are the big successes of this. Over 5 lakh Hindus did voluntary Home Coming (paravartan) from forced Muslim and Christian practice.

It is said that life begins at 50. VHP has come leaps and bounds ahead to spread and protect Hindu Dharma. An apolitical socio-religious movement has become a support hand for Hindus, which now has strength to express in one voice the issues of Hindus and influence the polity so that Hindu rights are protected. We all have many many miles to go. Vicious efforts to malign the image and work of VHP will continue by the so-called anti-Hindu and pseudo secular forces. VHP will move ahead for Hindus all the tie irrespective of individuals as we believe that ideology is prime. To multiply VHP’s efforts in all the fields of socio-legal, socio-religious and socio-economic aspects for Hindus, VHP is gearing up with the ‘VHP Vision’ which was announced in Kerala meeting in 2011 when a young team had been announced (The detailed VHP Vision document is available on www.vhp.org  Or one can simply give search on Google: VHP Vision – Kerala). Past 2 years much has been charted out and achieved. Much more is to be done. Let us together make a difference!

Thu Aug 29 , 2013
Kerala Aug 29: ‘Balagokulam’, an tinitiative for imbuing patriotic skills and moral concerns among children by Rashtriya Swayamsevak Sangh, today celebrated Sree Krishna Jayanti/ Gokulashtami all across Kerala with all it’s charm and devotion. Thousands of children, dressed up as Sree Krishna, Gopika and other similar characters from Krishna’s life, […] 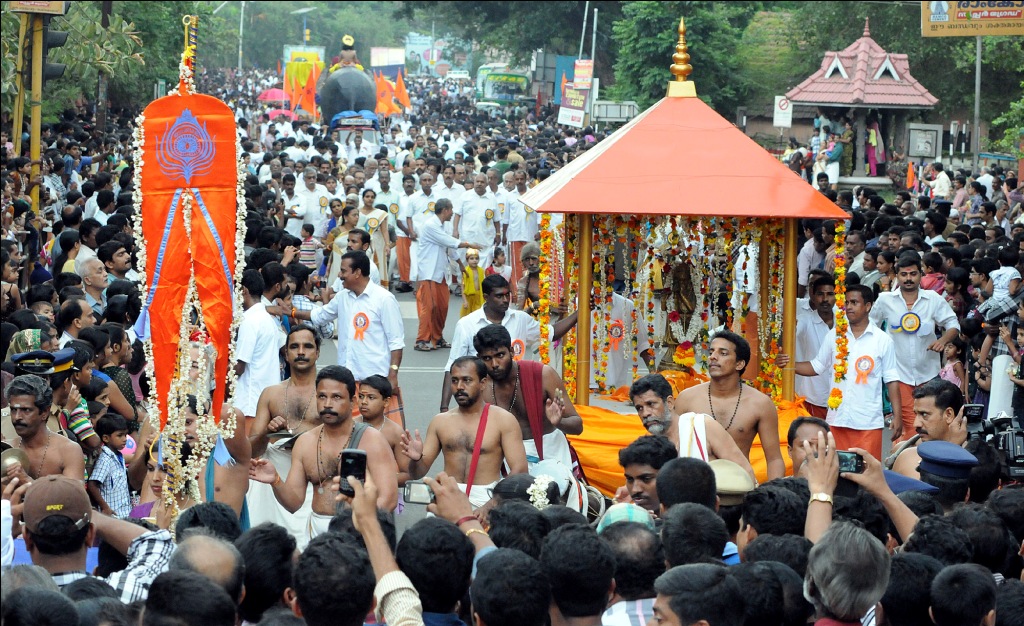