Reason for LK Advani not attending the Parliamentary Board Meeting before which there was only one, the most important agenda was to declare Narendra Modi as Prime Ministerial candidate in the election to the Lok Sabha scheduled to be held in the first quarter of 2014 has caused consternation among myriads of BJP cadres, his admirers as well as well-wishers of BJP.  But this does not mean or to be understood to mean his high position and status in the party as well as the respect and regard he enjoys and commands in the party. The bond between Advaniji, Sangh and BJP is inseparable.

Advaniji became a swayamsevak of RSS in 1942 in Karachi when he was aged 15 and about the same time, I also became a swayamsevak at Shimoga in Karnataka.  The basic bond between Advaniji as a swayamsevak, Sangh and BJP is inseparable for according to the concept of Dr Hedgewar, the founder of RSS, once a person becomes swayamsevak he is always a swayamsevak.  It has no comparison with that of a person becoming a member of any organisation and giving it up. Advaniji has spent every ounce of his energy and every moment of his life in the selfless service to the organisation and the Nation. Indisputably  on account of his quality of head,  heart, intellect and capacity, he is a shining star in the political horizon of Bharat. He reached the penultimate position of power as Deputy Prime Minister of India. I have highlighted his selfless and dedicated service for more than four decades, in my article published in special issue of Swadesh published to commemorate four decades of dedicated service to the nation by LK Advani.  In the concluding part of the Article I stated as follows:-

My intimate contact with him commenced when I filed his Habeas Corpus Writ Petition alongwith those of Atal Bihari Vajpayee, Madhu Dandavate and Shyamnandan Mishra in the Karnataka High Court when patriots of such high order were arrested as a threat to internal security by Indira Gandhi Government on June 26, 1975.  Only on account of fearless discharge of professional obligation by me, I was detained in Central Jail, Bangalore along with him for more than one year. From then and thereafter, I have been in close contact with him for nearly four decades and became his great admirer.

In fact, when Narendra Modi was attacked from all sides as if he was responsible for 2002 communal riots in Gujarat, though he was not responsible and those really responsible for 2002 riots were those who engineered the burning alive of 60 Ram Bhakts at Godhra, gave greave provocation.  In view of such wide anti-propaganda against Narendra Modi, the then Prime Minister Atal Bihari Vajpayee felt that Narendra Modi should resign.  Then, Advaniji alongwith Sudarshanji, the then Sarsanghachalak of RSS stood firmly behind Narendra Modi and opposed the demand for his resignation for no fault of his. Today, there is overwhelming support in favour of Narendra Modi for being a Prime Ministerial candidate in 2014 among swayamsevaks, BJP cadres and also generally among the people.

But the fact remains that Advaniji always enjoys the highest position in the organisational hierarchy and it remains intact even now.  The bond between him, Sangh and BJP is organic and divine and therefore inseparable.  His guidance and appeal is indispensable for the BJP both in the election to the four State Assemblies slated this year and to the Lok Sabha election in 2014 and that the bruise caused by his  absence at the Parliamentary Board Meeting at which Narendra Modi was anointed as Prime Ministerial candidate will be healed quickly and his dedicated leadership will be available to the BJP in a more resplendent manner.

Mon Sep 23 , 2013
Onam Celebration in Sabari Balashramam : The Banquet shared is Rather Sweeter Onam is a festival of unity, sharing, caring and love, people join others in celebration.  Here, at Aranmula, Sabari Balashramam witnessed a blissful unity of children… The Children at Balashramam had 40 guests to share the rejoicing spirit […] 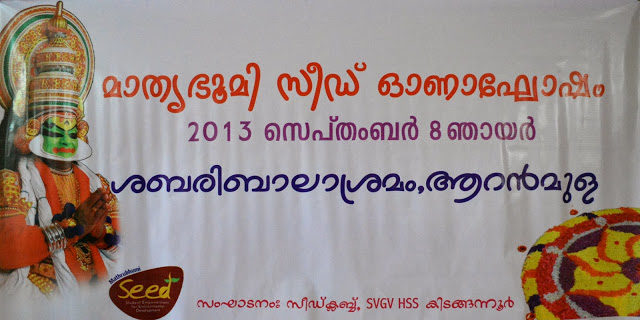