The celebration of January 1st as New Year day is not very old. Even today it is not celebrated as New Year day by everybody – many old cultures and civilizations still use their own calendars and New Year.

Actually, the month of January itself is not very old. One of the most acknowledged calendars of the western civilization is “Roman calendar”. This calendar had just 10 months and 304 days – March was the first month and December was the 10th month. The last 4 months September, October, November and December were denoted by their month numbers. September was the 7th month and hence the name of the month had “Septem” meaning 7th. Similarly, October had “Octo” or 8th, November had “Novem” or 9th and December had “Decem” or 10th in its name. In this calendar, March 1st was the first day of the year or New Year day. Numa Pontilius (753 B.C to 673 B.C) the legendary king of Rome and successor to Romulus, added the months January and February to Roman calendar in 700 BC.
Later in 46 B.C, King Julius Caesar introduced a new solar based calendar. This calendar is known as the “Julian Calendar” and replaced the old Roman calendar. January became the first month of the Julian calendar. The name January comes from the Roman god Janus which has 2 faces. Janus also has a temple at Rome with double doors. Caesar worshipped Janus and thought that the year should start by remembering his god – hence he made January as the first month of the year.
But, still different cultures were observing different days as the first day of New Year. Christians in Medieval Europe observed different days such as, December 25th, March 1st, March 25th (Spring Equinox and the Feast of the Annunciation) and April 1st as the first day of the New Year. Egyptians, Phoenicians, and Persians had autumn equinox (September 21) as New Year.  Greeks used to consider winter solstice (December 21) as New Year.
In 1582 A.D, Pope Gregory XIII took help from German mathematician Christopher Clavius to reform the calendar and a new calendar called “Gregorian Calendar” came into existence. This calendar had January as the first month of the year. But, some people didn’t agree to change the New Year from April 1st to January 1st – because, April 1st corresponds to the start of the “Biblical Calendar”. To dissuade people from using April 1st as the first day of the year, that day was termed as “Fool’s Day” and people who followed April 1st as New Year were termed “April Fools”!
Catholic countries adopted Gregorian calendar as the official calendar. But, Protestants continued with Julian calendar for few more years. For example, British Empire and their colonies continued to celebrate March 25th and April 1st as New Year till 1752 A.D. By that time British had established a huge empire – so, January 1st was accepted as the first day of the New Year from 1752 onwards in most of the world. Russians adopted January 1st as New Year in 1918!
Though January 1st has become the de-facto New Year, April 1st is used as the beginning of the financial year. Similarly, many of the ancient cultures still use different days as New Year. Hindus follow their own “Solar” and “Lunar Calendars” – their new year comes in March-April months.  Chinese people who follow Hun culture follow a “LuniSolar Calendar” – the second new moon after the winter solstice is observed as the New Year. This comes somewhere between January 21st and February 20th. Muslims follow “Hijri Calendar” and observe “First day of Muharram” as the New Year day. This comes in the month of December. Sinhalese (Sri Lanka) New Year is celebrated on 13th or 14th of April – they follow the “Tamil Calendar”. Thailand also follows the Tamil New Year. Jews follow “Lunar Calendar” and their New Year day comes in-between September 6th and October 5th. 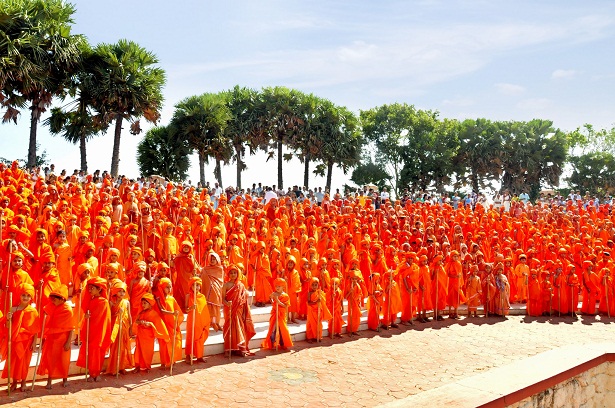