Skip to content
(Lecture Delivered at the Rotary Club of Bengaluru on 12-05-09)
Let me at the outset thank the Rotary Club of Bengaluru for inviting me. I am returning to a Rotary event after almost a decade. I had occasions to address the District Conferences of the Club twice before when I was at Hyderabad. I further thank the organisers for asking me to speak on a topic that is ‘hot’ all over India and especially hotter here in Karnataka – “Politicisation of Indian Culture”.
There has been a serious debate over this topic in India in the last few months. There was name-calling, blame-games and high-pitch allegations galore over this question of Indian culture. Sadly, most of it remained ill-informed and rhetorical.
I don’t mean to say that there was no issue. There are genuine issues relating to what is happening in India in the name of culture. It is a cause for concern when someone comes and attacks a pub or a group of people try to disturb a fashion show calling it anti-Indian culture or some groups go berserk attacking gift shops or boys and girls in parks on Valentine’s Day in the name of protecting Indian culture.
We are all concerned about such violence. There should be no place for it in a democratic set up. If it is anti-Indian culture for young boys and girls to go to pubs it is equally very un-Indian culture-like to beat up young girls by unknown hooligans on the streets. I call it Semitisation and Talibanisation of our culture. We all must stand united to condemn such violence. We in the RSS have done it whenever such incidents happened.
But most of the times, the response of the rest of the society is also a cause for equal concern. We assume pink chaddies (underwear) are an answer to pub attacks. In our eagerness to respond to one type of radicalism we inadvertently resort to another form of fundamentalism. Then we have our ‘progressives’ for whom these issues have become bread and butter issues. They provide them an opportunity to shout and scream and get a few tele-bytes space on popular channels.
The violence stems from our refusal to engage groups in a
buy propecia

civilised dialogue. We are living in a democracy. Every viewpoint calls for respect. But most of the times we resort to downright condemnation calling the protagonists names. They are branded Hindu fundamentalists/Hindu Taliban and what not. Actually this Fascist response of the progressives is what lends more ammunition to the ‘culture crusaders’ like Muthaliks .

Every culture has its own great values and weak points. Protestant nations are said to have lower levels of corruption because the Protestant sects emphasize personal responsibility for avoidance of sin, whereas Catholic, Anglican and Orthodox doctrine accepts inherent human weakness and the need for the intervention of a forgiving Church.

We have to learn from the experience of Japan. Landes provides an account of the Meiji Restoration in Japan. Japanese culture – work ethic, effective government, self discipline, nationalism – made the difference. The Japanese determined to learn and adopt the best practices in the European world and the U.S. They were spectacularly successful.
“Other countries imported foreign technicians to teach their own people; the Japanese largely taught themselves. Other countries imported foreign equipment and did their best to use it; the Japanese modified it, made it better, and made it themselves.
“The difference was cultural – a deep sense of national responsibility. The new imperial state and its educational system brought the Japanese people a strong sense of nationalism and duty to the nation. It was a Japanese version of the ‘Protestant ethic’ of work and responsibility described by Max Weber in ‘Economy and Society’”. That is the basis for the explosive growth of Japanese human capital.
In conclusion, I would like to clarify that I am not advocating protectionism and close-mindedness. Indian culture always believed in the dictum:
‘Aano bhadrah kratavo yantu vishwatah’ – Rigveda
“Let noble thoughts come from all sides of the world”.
I quote Gandhiji to end my speech.
“Let my windows and doors be open for the outside world. Let the cool and soft winds blow from all sides into my house. But I should not be blown off or uprooted’.

Fri Mar 1 , 2013
Thiruvananthapuram (Kerala), February 27,  2013 : Thiruvananthapuram city at the eve of a big ritual witnessed  a huge sabotage on main water pipeline. But the timely action by RSS Mahanagar team and Vibhag team made available adequate water by arranging 500 lorries with 2000 volunteers  The allegation, that a section of politicians […] 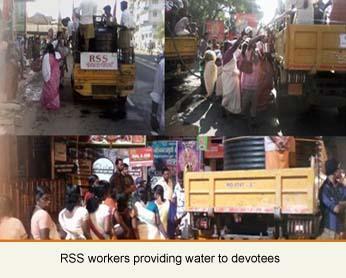