The recent news about the efforts on the part of both the central government and the RBI to check the fall of rupee against US dollar and other international currencies is to take hold of the colossal amount of gold from various Hindu temples and to set the equilibrium against the crunch for gold in the indigenous market so that the import of gold would become lesser and lesser is really disturbing from the emotional and rational points of view. The Congress-lead central government has a notorious history of financial mismanagements and extravagances right from the day of its office since 2004 and still running after popular programmes like NAREGA and Food Security Act just to hoodwink the Aam Aadmi and to grab the power for the third consecutive term registering a hat-trick record.

The faulty policies taken by the Finance Ministers like Mr. Pranab Mukherjee and Mr. Chidambaram like providing huge amount of subsidies to the corporate secter and with special focus on excise deportment are yielding the inevitable dividend now in the form of alarming financial crisis almost similar to the position existed in 1991. Paradoxically, the man who was one among the duo who lifted the falling economy then (the other being P.V. Narasimha Rao) as the Finance Minister is now himself has become the part of the problem (the other four in the company who ditched the nation are Sonia Gandhi, P.Chidambaram, Pranab Mukherjee and Montek Singh Ahluvalia). In one of his the election campaigns in 2009, Dr. Singh promised that he would bring back the black money deposited in Swiss Bank within 100 days of assuming the office if UPA is voted back for the second time. But when he took the charge of office for the 2nd time in 2009 again as the Prime Minister, he consciously kept mum on the issue and set it completely aside from his agenda. The government then provided a safe passage to the holders of black money and has still kept the nation under dark. Economists opine that if the black money is brought back then the current scenario would totally be in a reversal position i. e. a rupee may cost 67 US dollars! There may be a tinge of exaggeration in the observation but the fact remains clear that the government is putting its malicious eyes on the treasures of temples to hide its inability to tackle the situation with logically appropriate measures.

The treasures in the temples have a history and significance of their own in India. They are not considered as the source of wealth for irrational utilization. The devotees ardently donate their bit as a token of their devotion and allegiance in the form of cash or kind which constitute the treasure of the shrine. The devotees include people from various social strata – from a king to a poor man – but their contributions is looked on equal terms and were treated with parity. Those treasures were reserved to utilise in times of distress like natural calamities, famine etc when the rulers fail to address the grievances of their subject. But it is a wicked intention by the government to claim the authority on the treasure and try to solve the current problem just to hide its failure. The government under the dubious policy of secularism to satiate and secure the minority votes has done more damage to the hindu majority with draconic plans like the demolition of Ramsethu and such other projects which severely disturb the hindu conscience. Now it is planning to possess the treasure thereby equating itself with the  mohammadan looters like Ghazni, Ghori and the wretched Moghuls.

When the colossal quantum of wealth was discovered in the holy shrine of Sri Ananthapadmanabha in Thiruvananthapuram a couple of years back, the royal dynasty of Tiruvankor  which is in charge of the treasure received rich accolades and appreciations from the public for its sage-like detachment despite being the custodian of the treasure. Just look at the men in the government who claim that they possess the degrees from Universities like Cambridge and Harvard and the way they display their foolhardiness…!

Sept 20-21: Seminar on 'Constitutional & Legal Status of Jammu and Kashmir' at Ghaziabad

Fri Sep 6 , 2013
New Delhi: Jammu and Kashmir Study Centre along with Mewar University and Akhil Bharateeya Adhivakta Parishad is conducting an all-important 2-day seminar on ‘Constitutional and Legal Status of Jammu and Kashmir’ on 20th and 21st of September in Ghaziabad. This is the first time in our independent history that such a seminar is being […] 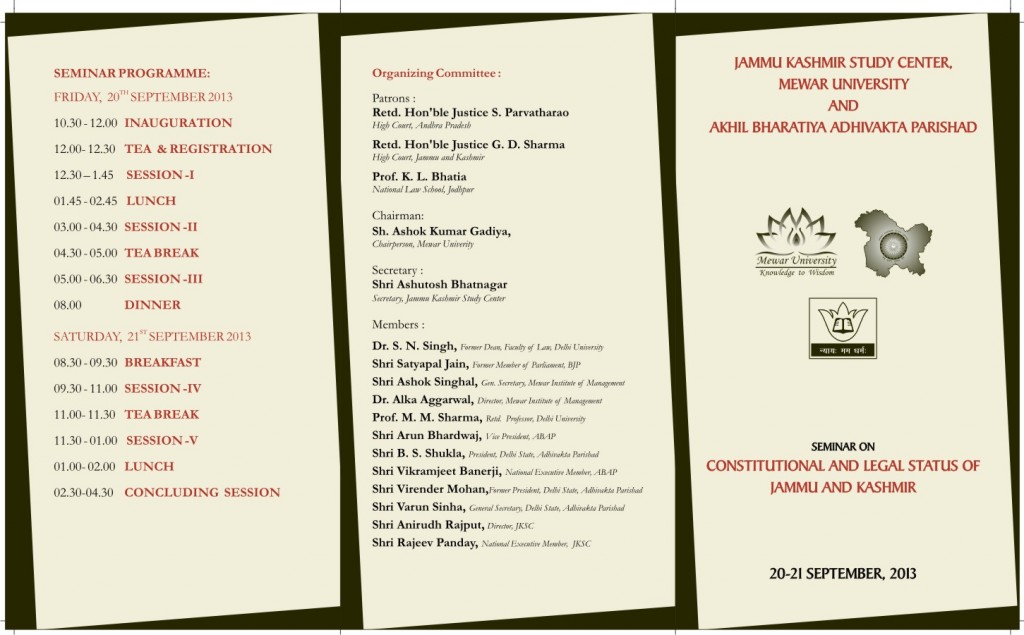