Bhagyaagar (Hyderabad) June 13: A condolence meeting of late D.Dwarakacharyulu, a senior pracharak of RSS was held at Kesava Memorial College, Narayanguda, Hyderabad on 13th June 2013. He passed away on 30-5-2013 at Hyderabad due to prolonged sickness. Several RSS functionaries and swayamsevaks attended the condolence meet. Those who spoke at the meeting recalled their memories with him and remembered him with gratitude for all the inspiration and guidance they received from him when he was alive. He was a mentor to most of the speakers and because of that they are able to shoulder the present responsibilities in the Sangh with confidence and ability. Shri Deshmukh, Khetra Sanghchalak while addressing the gathering mentioned that late Dwarakacharyulu belonged to that rare category of people who exhibited great leadership qualities and moulded swayamsevaks, showed direction and exercisedtremendous impact on them by inculcating qualities of service and dedication.  He also recalled the great service rendered by late Dwarakacharyulu in massive construction work and rehabilitation of thousands of people suffered due to cyclone in Krishna District of Andhra Pradesh during 1977. He was instrumental in construction of Deendayalpuram village to provide homes to those rendered homeless during hurricane by overcoming several difficulties.

ShriVidwan Reddy, a senior RSS functionarywhile addressing recalled how Dwarakacharyuluji used to express his desire to be born again and again in India to serve. Due to his efforts there were several community lunches well attended which helped in bringing people together.  ShriGaneshlal a V.H.P.leader recalled his association with him and said the real tribute to late Dwarakacharyulu will be to follow the path shown by him. Dr.A.Subrahmanyam a senior functionary of R.S.S. who earlier briefed the audience and introduced the speakers on the dais recalled his association with him and read out a letter which Dwarakacharyuluji wrote to Vanavasibandhus (tribal relatives) asking for excuse for any mistakes committed by him while ensuring proper welfare to them.

Shri Ramesh Babu a senior functionary of RSS engaged in activities in North Eastern Region, explained about the great work carried out by late Dwarkacharyulu through Vanavasikalyanashram for the betterment of tribal people in Arunachalapradesh, Tripura and Nagaland. He worked with dedication to stop the conversions to Christianity and helped in strengthening the cause of Hindus and actively worked in tandem with Ramakrishna Mission and Vivekananda Kendra to achieve our goal. He played a major role in strengthening our activities in North-Eastern Region by bringing all forces on one United Hindu Platform.  ShriM.Y.V.Rama Murthy a Sanghacitivist from Kurnool narrated his experiences with late Dwarakacharyulu and admired his organising skills and recalled how he worked during Guruji’s visit to Kurnool town and subsequently arranging a big festival which was largely attended. Dr.Surender Reddy looking after ArogyaBharathi activities of the Sangh in Andhra Pradesh recalled his association when late Dwarakaji was pracharak of Hyderabad old city and had the chance of getting trained both by him and Satheji.

ShriSomayajulu, all India Organising Secretary, VanavasiKalyanashram, narrated that correct seed of Hindu consolidation was planted by late Dwarakaji in places like Bastar in Madhya Pradesh and Arunachal Pradesh.He did pioneering work in Arunachal Pradesh like stopping religious conversions and getting 450 temples built where good number of locals used to participate in prayers which resulted in changing their mind-set towards spirituality.

A message received from Shri Bhayyaji Joshi, Sarkaryavah of R.S.S was read out by Shri A.Subrahmanyam in which he lauded the valiant efforts of late Dwarakacharyulu in every activity that he carried out  like dedicated work in VanavasiKalyanashram, Hindu consolidation in North-Eastern Region, rebuilding of cyclone effected  village in Andhra Pradesh and training of several RSS Karyakartas. ShriBhayyaji Joshi said that he led an ideal life worth emulation by others and conveyed his heart-felt condolences on the bereavement.  ShriDusi Ramakrishna KhetraKaryavah told that he was much benefited from the training received from late Dwarakaji like working with dedication and determination.

ShriBandaruDattatreya, former Central Minister and BJP leader while speaking talked about the close relationship he had with late Dwarkacharyulu and admired his service activities carried out with precision and recalled the great work done by him while building Deendayalpuram with full Vastu in cyclone affected village. He was a good thinker, a good planner, and a good organiser, ShriDattatreya said.  ShriT.Hanumath Prasad sang a song composed by him in memory of late Dwarakacharyulu.

ShriBhagaiah, all India BouddhikPramukh of R.S.S. while speaking called late Dwarakaji as an all-sided personality who made impossible things as possible. His contribution in building of Deendayalpuram in Krishna District, Madhavnagar near Machilipatnam and Keshavpuri in Guntur District stand testimony to his foresightedness. During 1968 SanghSikshavarg, his participation in Ghosh through Aanak(musical instrument) was a treat to watch. Being greatly impressed with his rehabilitation work in cyclone effected areas of Krishna District, ShriYadavarao Joshi the then KhetraPracharak sent him to Arunachal Pradesh where firstly  he took up the work in VanavasiKalyanashram and taught procedure of worship to the local people there. When he fell suddenly ill in a Baithak, he got injury to his head and lost consciousness and was operated upon in Calcutta. Though recovered initially, he again became sick and could not recover really and end came on 30th May at Hyderabad. But he never lost his mental balance and was alert mentally despite worsening physical health. So strong was his will power. 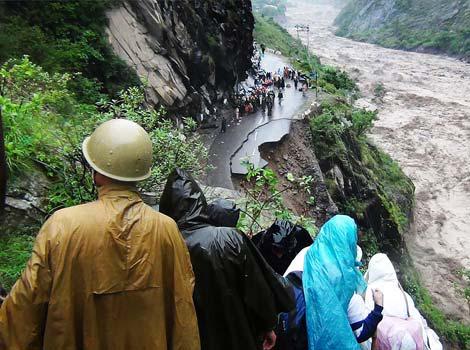