Skip to content
New York Jan 24, 2013: Union Home Minister Mr. Sushilkumar Shinde announced on Sunday (January 20, 2013) addressing at a highly partisan AICC session that BJP and it’s ideological mentor, the Rashtriya Swayamsevak Sangh, were promoting “Hindu terrorism” through their training camps. He also added that the government was keeping a strict vigil on the terror activities of the two organizations.
Global Hindu Heritage Foundation (GHHF), on behalf of many Hindus across the globe, strongly condemns the partisan, ignorant, narrow-minded, and bigoted and totally prejudiced statement about the alleged “Hindu Terrorism.” This is unwarranted, unwise, absurd, unjustified, illogical, unpardonable and ridiculous. This is a kind of statement that is made by somebody who is ignorant of the history of Hindu religion, ill-informed of Rashtriya Swayamsevak Sangh, unfamiliar with the history of Islamic onslaught on the land of Bharath, unacquainted with the Goa inquisition, and unaware about the history of atrocities, terror, and torture inflicted on Hindus.

Mr. Shinde’s statement is an affront to all Hindus, their faith in nonviolence, their belief in peaceful coexistence, their conviction in the principles of liberty and freedom of expression, their abiding faith practicing human dignity, and their steadfast trust in respect for human life.

GHHF strongly condemns Mr. Shinde for his hateful, revolting and spiteful comment about Hindu Terrorism. His comment is misplaced and more appropriate about Islamic Terrorism, instead of Hindu Terrorism. Ignorance cannot demean the whole Hindu community.  Facts do not cease to exist because of ignorance. Facts do not lie. Politicians do.

Mr. Shinde, please remove the blinds on your eyes, erase the fog in your mind and look into your consciousness and learn little history of Bharat that spans thousands and thousands of years with sterling character and high morals. It is the Muslims who killed millions of Hindus on the top of Hindu Kush mountains; destroyed thousands of Hindu Temples over a period of ten centuries; eloped, kidnapped and raped untold number of Hindu women; built Mosques next to or on top of the most sacred places for Hindus – Mathura, Ayodhya, Varanasi; massacred scores of Hindus during Moplah rebellion; committed genocide on Hindus at Noakkhali in Bengal; ruthlessly imposed Jizya taxes on Hindus who refused to be converted; depleted Hindu population from nearly 18 percent at the time of Independence to near zero percent in Pakistan; reduced Hindu population from about 24 percent to about six percent in Bangladesh; engaged in ethnic cleansing by chasing Kashmiri Pundits from their home land; engaged in unchecked infiltration into West Bengal, Assam and UP; coordinated the explosion of hundreds of bombs in places like Bombay, Delhi, Varanasi, Allahabad, Hyderabad, Bangalore, Poona and other cities;  and continually declare Jihad on Hindus and others.

GHHF strongly condemns diversion tactics of Mr. Shinde who accused BJP and RSS instead of taking action against Pakistan, which barbarically beheaded our patriotic soldier at the Line of Control.

GHHF strongly condemns Mr. Shinde for his failure to denounce Mumbai attacks Mastermind and LeT founder, Hafiz Saeed, for his accusation that Indian organizations were “involved in all kinds of terrorism in Pakistan” implying RSS and BJP.

GHHF strongly condemns such a statement being made at AICC partisan group to create animosity against BJP and RSS. He should have announced at a neutral place with all the evidence in front of the media.

Mr. Shinde, it is not too late to learn the history of Bharat as well as terrorism that wrecked the nation.  GHHF provides the following lessons for all of us to learn:

1) Lesson one.  Dr. A P J Abdul Kalam, former President of India has rightly pointed out the richness of Hinduism as follows: “ In 3000 years of our history people from all over the world have come and invaded us, captured our lands, conquered our minds. From Alexander onwards, the Greeks, the Turks, the Moguls, the Portuguese, the British, the French, the Dutch, all of them came and looted us, took over what was ours. Yet we have not done this to any other nation. We have not conquered anyone. We have not grabbed their lands, their culture, their history and tried to enforce our way of life on them. Why? Because we respect the freedom of others.”

Hindus have for millennium worked for the welfare of the humanity: never waged war for religious hegemony; never persecuted any nation; never unleashed the Sword or the Book to convert people into their faith; and never demeaned and destroyed other civilizations.  Hindus have always been hospitable and welcomed all the religions that were persecuted in their respective countries before they landed in Bharath, only to be stabbed by invading religions.

Thus, GHHF strongly condemns Mr. Shinde for his failure to provide an iota of evidence before making an accusation. What kind of evidence does he have to prove that BJP and RSS are conducting ‘terror training’ camps to spread saffron terrorism in the country? None. For political vote bank politics, for potential economic rewards, and to remain in the good books of the ‘leadership’, no politician should insult, demean, and offend the most “disciplined” organization  — Rashtriya Swayamsevak Sangh.

2) Lesson Two. Let us see what Former Supreme Court Justice Honorable K T Thomas has to say about RSS and the government’s smearing campaign to tarnish its image. He said that he admired the discipline exhibited by RSS whose mission is to protect the national security. He observed that during Emergency Period (1975-77), RSS was “the only nonpolitical organization which worked fearlessly in subterranean sector … the result, that this country, Bharath, could be liberated from the pangs of a dictatorship. We owe very much to this organization for sacrificing many lives and many of the pleasures of life for the purpose of regaining what our leaders have gained this country, mainly the fundamental rights of this country.”

He said “I find many instances of official activities governmental and political where security is given less prominence than vote bank, I am really disturbed. That is a matter on which the country should stand unanimously and uniformly with strident voice declare that we will not tolerate.”

He continued by saying that, “I am a great admirer of this organization. The discipline exhibited everywhere and even today the manner in which the flowers are offered gave me the real impression that the discipline is given the real impetus to your working and performances. Discipline is needed for a nation. Discipline is a fundamental thing for the growth of the nation. Whichever nation has progressed, you will see that where discipline has been inculcated in the citizens. In that matter, RSS is a model to me also.”

Based on the observations of Dr. Abdul Kalam and Honorable K T Thomas, Mr. Shinde was playing politics with either total ignorance or acting as a puppet in the hands of the high command. Ignorance in the history of Bharath is frightening, scary, and worrisome.  Let us pray that soul searching will bring much needed enlightenment.

GHHF strongly condemns his unwarranted “Hindu Terrorism’ comment, his absence in pointing finger at the real terror outfits in and outside Bharath, and his partisan warped views about BJP and RSS.

GHHF publicly demands Mr. Shinde to withdraw his statement and apologize to BJP and RSS and the whole nation. He should also resign from his office as a Home Minister to restore the dignity and honor of the position and to create respect among people for the office. 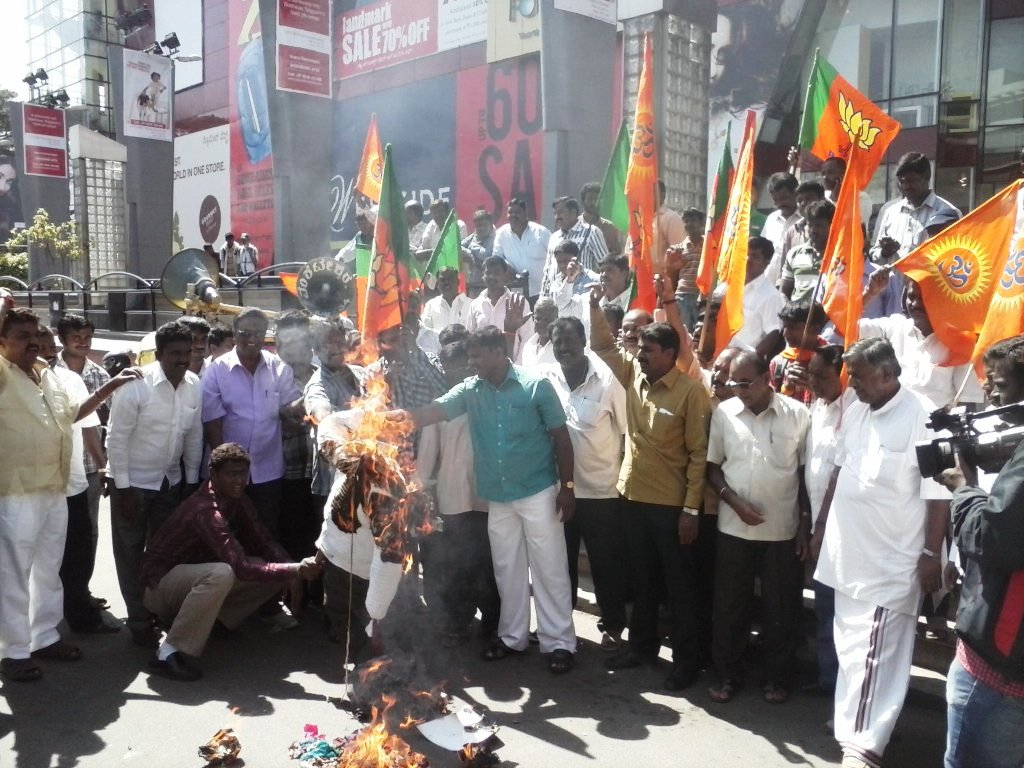