He was a American born in Romania to a Christian family. He was a callow 22-year-old when he picked Paramhansa Yogananda’s “Autobiography of a Yogi” at a New York book store. The spiritual classic was to transform J. Donald Walters into Swami Kriyananda and make him a lifelong devotee of Sanatan Dharma, a concept of universal religion. The Gorakhpur-born Yogananda initiated the novice Kriyananda into spirituality, laying the foundation that helped the American to eventually become a yoga guru and a true admirer of India until he passed away at Asissi in Italy April 21.

By the time the end came at age 86, the man had authored over 140 spiritually enriching books and 400 pieces of poetry that collectively sold more than three million copies around the world. As one of the last direct surviving disciples of Yogananda, thousands flocked to his discourses.

In talk after talk, Kriyananda spoke admiringly of Yogananda, the saintly Kriya Yoga master who had made the US his home in 1920 and with whom Kriyananda spent nearly four years until the Indian passed away in 1952. Kriya yoga consists of a number of levels of breathing techniques intended to rapidly accelerate spiritual development.

Starting in 1958, Kriyananda visited India many times. In his journeys around the country, he met spiritual gurus including Anandamayee Ma, who used to call him “chhoto chele” (little child). In later years he despaired that India had fewer and fewer holy men.

He also interacted with then prime minister Jawaharlal Nehru.

Like it happens to most spiritual leaders, Kriyananda had his share of problems. He was ousted from Yogananda’s Self Realization Fellowship, a development that greatly upset him. At one time he had virtually no money. But he remained glued to spirituality and founded the Ananda Sangha.

For over six decades, Kriyananda passionately preached Sanatan Dharma, Kriya Yoga and meditation techniques. In his writings and talks, he pleaded with people to find god. He was innately secular and had the highest regard for India’s spiritual and cultural diversity.

Once his spiritual community took roots in the US and Italy, Kriyananda set up India’s first Ananda Sangha centre at Gurgaon near Delhi, along with a small band of Westerners equally devoted to Sanatan Dharma. More centres followed, attracting more and more Indians to Kriya Yoga.

All through, Kriyananda remained a lover of India, calling it a land of great saints and yogis. “One has only to set foot on that sacred ground, if he is sensitive, to feel the blessings,” he wrote. He said to thunderous applause in Chennai this year that Hindus were not “idol worshippers” but “ideal worshippers”.

“India, of all ancient cultures, has clung to the highest truth, that god is the only reality, that this universe is His dream, and that our duty is to reunite our souls with Him,” he once told IANS. “That is why so many great souls have been born (in India).”

He agreed that India had become more materialistic. “But it is a necessary step for India,” he argued, almost like an Indian. “She needs to take her rightful place among the great nations of the world. But she will never be able to escape her spiritual roots. She will become more intensely spiritual than before – in time.”

In “Hindu Way of Awakening”, one of his celebrated books, Kriyananda expressed “a deep-seated nostalgia for India” and said Hinduism had been more tolerant of other ways than, perhaps, any other religion.

Even as age took its toll, Kriyananda addressed large crowds around India in 2012-13. These were his last public meetings. At Chennai, more than 2,000 flocked to the Music Academy hall and heard him in pin drop silence.

He left India in March promising to return – and spend his last days in the Himalayas. That was not to be. On Sunday, around 12 noon India time, he felt uneasy. He had been unwell. As he lay down, his worried aides chanted god’s name into his ears. Listening to that, the 86-year-old breathed his last

Wed Apr 24 , 2013
by Rajesh Padmar BENGALURU’S cool and calm Mallesh-waram saw an unusual Wednesday (April 17) morning, as a powerful bomb exploded, injuring 16 people including eight policemen. There was a moment of panic within city, but recovered soon after high alert operations of police, media and social media activists. There was […] 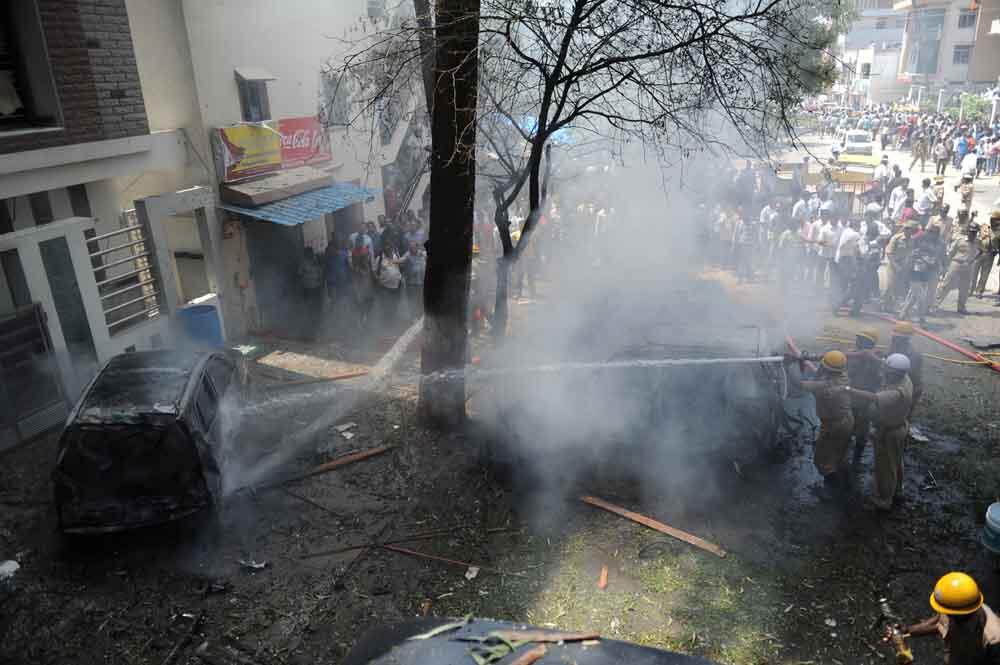