The Rashtriya Swayamsevak Sangh (RSS) is playing a major role yet again in setting the controversy-riddled Bharatiya Janata Party (BJP) house in order. However, its affable spokesperson Ram Madhav refuses to accept that. In an interview with Bharti Nath of Deccan Herald, he defends the RSS and its ideology, which he says, is against any kind of violence in the name of religion. Excerpts:
By making Narendra Modi the poll panel chief, hasn’t the BJP brought out Modi detractors within the party and outside in the open?

There are no Modi detractors in the BJP – not to my knowledge. Not a single person has spoken against Modi. Advani hasn’t spoken against Modi. Whatever reservations he had, he has taken them back. The BJP leaders had taken a decision together in Goa which was attended by all except Advani. In their own wisdom they got together, discussed and took a decision. The RSS doesn’t comment on a decision taken by the BJP leadership unanimously. We feel whatever decision is taken together must be in the interest of the party and the country.
Both Nitish Kumar and Naveen Patnaik have walked away from the NDA. Your reactions.Nitish Kumar and Naveen Patnaik are the best judges of the situation. They took a decision which they thought is in their interest.
Very often, the RSS comes forward to “counsel” the BJP leaders – the latest being Sangh chief Mohan Bhagwat placating LK Advani. Doesn’t it amount to intervention in BJP’s internal affairs?

There were some developments in the last few days but they have ended well. Everything has been sorted out. Advaniji is a tall and a highly respected leader of the country. He had certain reservations over the way things were happening. He took a decision which startled many people. Many tried to persuade him to take back his decision including the NDA allies. That doesn’t amount to intervening in party affairs. In a similar manner, the RSS chief also suggested that keeping in view the interest of the party and his colleagues. You must understand that Advaniji and Bhagwatji both belong to the same ideological school and both share mutual goodwill and respect.
Why don’t you declare the BJP the political wing of the RSS instead of staying in denial mode?

Instead of “Hindutva nationalism”, why doesn’t the RSS practice an ideology which is acceptable to all Indians?

The essence of “Hindutva nationalism” is respecting all forms of religion. We don’t believe in dividing the society on any lines. We treat India as one. That’s the true essence of secularism and that’s what we stand for – and that is what Hindutva is. Many people understand what we say but there are others who get influenced by the negative propaganda made for political reasons. Many people preach secularism but in reality practice what is against secularism.
Most of the leaders in the BJP have their roots in the RSS, yet when in power they are corrupt and autocratic. In Karnataka, The BJP lost power because of that.

This is an important question but directed to a wrong person. The BJP has analysed the reasons and it will do what it has to. In election parties win, parties lose; it’s not the end of the road for the party. If some things need to be corrected, the BJP will do. People aren’t disenchanted with the BJP. It got 10-15 per cent of vote. RSS association or not, political leaders have to fulfill certain expectations of people. If they don’t, there will be consequences. The RSS is frequently associated with communal violence – what do you have to say about it?

Any violence in the name of the religion is wrong. The RSS never supports, never subscribes, never sponsors any form of violence in the name of religion. This is our committed position on using violence as the means to perpetuate ideas. Secondly, efforts to link the RSS to certain incidents are part of political vendetta. The RSS wasn’t involved in any of those incidents. The RSS has in fact asked the government of the day to act against the culprits. Only thing that we are clear in our mind is that nobody should create an atmosphere which leads to violence. We live in a society which is heterogeneous and we have to follow certain values where we respect each other; we don’t trample upon sentiments of the others. “I am minority, I have the right to do anything, you are the majority so you should tolerate” – that also is not acceptable. We have to live as one society so we have to respect each other. If everybody follows this, scope for violence will be minimal.

Massive Response for RSS Flood Relief Campaign; RSS gets support from all Walks of Life

Mon Jun 24 , 2013
Hubli/Bangalore, June 24: From layman to corporate officers, there was a massive response for RSS initiated flood relief campaign in Karnataka. Hundreds of RSS well wishers, others, family members of Swayamsevaks came in support for the RSS campaign. RSS campaign got tremendous response from all walks of life. Major Newspapers […] 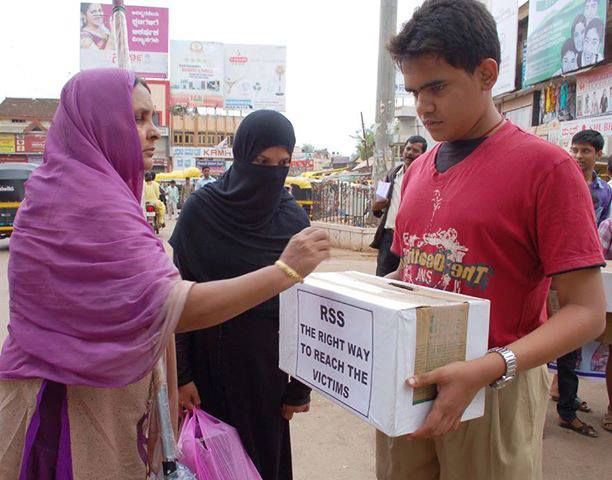