Jaipur, March 16, 2013:  Speaking to the reporters on the second day of Akhil Bhartiya Pratinidhi Sabha, at Keshav Vidyapeth Jaipur, Dr. Krishna Gopal Ji, Sahsarkaryawah and Shri Nandakumar Ji, Akhil Bhartiya Sahprachar Pramukh told that one of the alarming issues has been huge influx of Muslims from the neighboring countries. Since independence if one tracks the percentage growth, it can be easily seen that the growth has not been a natural one. Large contribution has been from countries like Bangladesh. This is a matter of grave concern and is a national threat.

In response to the questions asked on the condition of women in the country, Dr Krishna Gopal told the reporters that there should be a stringent law to tackle the plight of females in the country today. There is a grave need for spreading moral education and values among various sections of society.

Reading the statement of Sarkaryawah Shri Bhaiyya Ji Joshi, Dr. Krishna Gopal ji told that around this time last year, just before the last meeting of the UNHRC at Geneva, we had issued a statement calling upon the Government of Sri Lanka to proactively take steps to alleviate the sufferings of the Tamils of that country and also to ensure proper rehabilitation, security and political rights to them. But one year down the line there has not been much improvement in the ground situation. If anything, the suspicions of the world community over the intentions of the Government of Sri Lanka have further deepened.

Government of Sri Lanka needs to be reminded that it can’t continue to turn a blind eye to the plight of the Tamils who had suffered immensely during the 30 year-long war between the LTTE and the Sri Lankan Forces losing lives, livelihood, homes and temples. Tens of thousands of them had to flee the country and more than a lakh had arrived on the shores of Tamilnadu as refugees.

It is our considered opinion that lasting peace will return to Sri Lanka only when the Government of that country sincerely and amply addresses the grievances of the Tamils of the North and East as well as those refugees living in India. It is urged to the Government of Bharat to ensure that the Sri Lankan Government acts in a responsible manner in rehabilitating and providing full civil and political rights to the displaced Tamils.

It must also be borne in mind that this neighbourhood Indian Ocean island with millennia-old linkages with Bharat shouldn’t be allowed to become a pawn in the great geo-strategic power game being played out by the global powers with the Indian Ocean as the battle-ground. Attempts to widen the gulf between the Sinhala and Tamil population of that country must not be allowed to succeed. Therein lays the key to lasting solution to the Sri Lankan crisis.

Talking about the present condition of the country Dr. Krishna Gopal Ji told the reporters that the economic crisis aggravated by the myopic policies of the Government and neglect of the Agriculture, SSIs and such other employment oriented sectors is emerging as a serious cause of concern for the country. Growth rate of manufacturing sector, growing unemployment, unabated price rise, widening deficit in foreign trade and growing foreign dominance are pushing us to a grave economic crisis and foreign dependence.

Growing incidents of suicides by the farmers due to neglect of agriculture, dependence of increasing number of farmers on Contract Farming and the irrational obduracy of the Government in Land Acquisition matters, etc. are pushing the life of crores of farmers into grave crisis, besides, affecting Food Security of the country.

Rivers like Ganga and Yamuna on the one hand are held as centres of profound reverence, and on the other hand they sustain the livelihood of crores of people besides sustaining ecological order of a large part of the country. The Government’s attempts to obstruct flow of these rivers, its neglect of keeping them pollution free and its apathy towards the popular river protection movements by ignoring their sentiments are also matters of grave concern.

On the other hand, river water disputes, like that of Cauvery, are also a matter of grave concern. Sharing of river water amongst the States must be done in a judicious and harmonious manner in the context of larger public good.

Likewise, the Ram Setu, besides being an object of faith for crores of Hindus, is effectively safeguarding the rare Thorium reserves, abundantly available in the region. The people in the country will never accept the obstinate attempt of the Government to go ahead with the Setu Samudram project by destroying the Ram Setu.

past as well, the Government had to give up before the wrath of the Ram Bhaktas, its attempt to start the work to build a shipping canal by destroying the Ram Setu. The affidavit filed by the Government in the Supreme Court, declining to adopt the alternative alignment, suggested by the Pachouri Committee raises the questions about its intentions. We urge the Government to respect the popular sentiments and dare not touch the Ram Setu, else it will once again become a target of massive public fury. On all such issues, the Government should act in national interest, keeping in view the public sentiments. 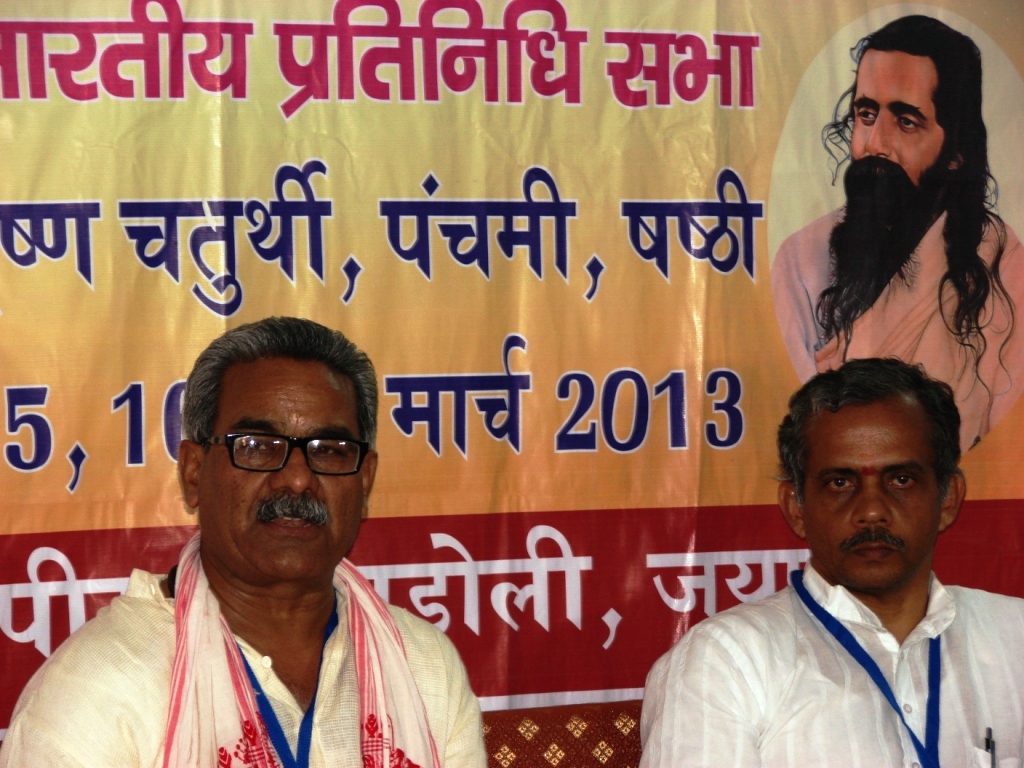