Agra July 1: A Rashtriya Swayamsevak Sangh (RSS) worker, who was here for a meeting, was kidnapped early Sunday when he went out for a morning stroll (Morning walk), police said.

The 55-year-old Ram Pal, from Uttar Pradesh’s Azamgarh district, came to attend a conference of the Akhil Bharatiya Vanvasi Bandhu Parishad at the Saraswati School in Kamla Nagar, according to Narendra Taneja, a local organiser.

A relative of Ram Pal in Kanpur informed police that the abductors on phone had demanded a ransom of Rs.20 lakh.

Sources said it appeared to be a case of mistaken identity. A case has been registered at the New Agra police station and teams sent out to look for Ram Pal. 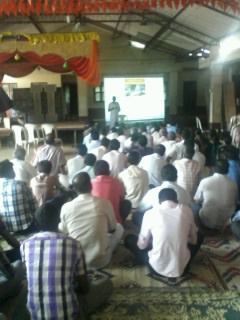