First one was about “Growing Jehadi Radicalisation in Southern States of Bharat” and the second on “Need for Effective Management of Our Land Borders”.

ABKM expressed grave concern over the growing radicalisation of Jehadi forces in the country especially in southern states. They penetrate into Muslim youths, organise terror camps and modules. Hindu activists are attacked and killed. Maoist forces and int’l jehadi groups are hands in glove posing a serious threat to national security. Unfortunately state governments are turning a blind eye towards these. Now, Popular Front of India is formed as a joint force of several outfits operating in the states. It replaces the banned SIMI.  Kerala govt. has submitted before the high court of Kerala that PFI is linked with Hizb ul Mujahideen, LeT and Al-Qaida.

ABKM demands ban on PFI. Central and state intelligence forces should inquire into their activities and links.

Dattatreya said that country’s security is in great danger. Effective management of our land border should be more efficient . Pakistan, their ISI, infiltration from the neighbouring countries, etc. are alarming. Govt. should facilitate infrastructure development in border areas. Along the Chinese  borders, our people get Chinese TV telecast and Chinese mobile facility. But, they do not get these two facilities of our country ! People from other parts of the country should know what is happening along the borders. Border Tourism should be encouraged for this.

He said that PFI should be banned. Even though ban alone will not help, it will send messages to all concerned that government is vigilant and means business.

Answering a question regarding Rahul Gandhi’s statement that he got information from the Intelligence officials that  ISI recruits youths from Muzaffar Nagar, Dathathreya said that public figures can get these information from the Intelligence people. But the crux of the point is what did his party’s government do in this regard. To the best of my knowledge nothing has been done so far in this respect. Asked if corruption among BJP men disappoints RSS leadership, he said that RSS stand is for action against corrupt people, whoever they are only after due process of Law. When there was allegations against Yediyurappa, we said that law should take its own course. Not only BJP, but also all parties should make sure that their candidates are not corrupt, but transparent and not having criminal background. The same time, mere allegations are not enough. All parties should follow this.

Answering another question, Dattatreya said that appeasement of minorities in the name of secularism, etc. should not be eschewed. When his attention was drawn to the fact that terrorism is on increase in Kerala despite the growth of Bharatiya Jan Sangh in Kerala since its all India session in Kozhikode in 1967, Dattatreya shot back why it is allowed here. RSS is always bold in this matter. RSS takes a firm stand against terrorism. The society should stand firm too. Govt. should educate the  people about threat of terrorism and awareness programmes should be promoted.

When asked about Narendra Modi’s statement that toilets are as important as temples in the country, Dattatreya said that both are important; just like both are essential in a house. There is no question of priority in this particular case; both are equally important.

Referring to the demographic shifts, Dattatreya said that it is happening due to three reasons: infiltration, conversion and birth rate. UPA identifies Muslim dominant distircts. In Karnataka, districts like Gulbarga are identified like this. It is clearly included in the policy papers of the government. This is not right. If government is helping the poor, religion should not be the basis for it. The poor people of all religions should be treated equally.

Answering a question about the family planning among Hindus, he said that serious discussion should take place among the elite. It should not be applicable for any particular community. There should be balanced development of the society and the nation. Proper, healthy, comprehensive approach should be there. Family planning should not lead to demographic imbalance in the society.

Regarding RamaJanmabhumiTemple in Ayodhya, Dattatreya said that now the matter is in supreme court. We are for a legislation in the parliament for the construction of the temple (like the then government did in the case of Somnath temple) or a union government order for it. The same time, RSS always support the stand taken by Dharmacharyas in this matter.

Answering a question concerning  Gadgil Commission report, he said that environmental protection is a must. RSS is always for comprehensive development.  ABKM is discussing the same. Media would be informed tomorrow about it.

Answering a question regarding the RSS support to the government to fight threats coming through the seas, Dathattreya said that  RSS is ready to extend co-operation and help to the government any time they ask for it. RSS has done it in the past whenever country faced attacks and threats, irrespective of who was at the helm. 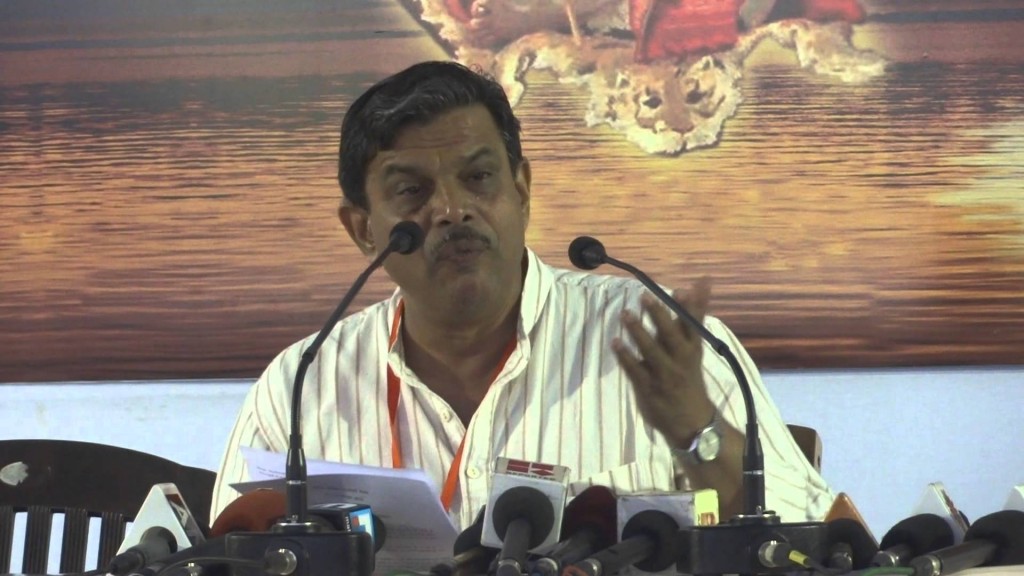