Allahabad, Nov. 12, 2013  Mr. Peter Youngren – a Canadian citizen – has come to Bharat on Government patronage to try to wipe out under the banner of ‘Changai Sabha’ farce the ancient holistic culture of our country. Under the regime of Sri Atal Behari Vajpayee, this person was banned from entering Bharat  to conduct such farcical events, but Mr. Youngren has been granted permission into Bharat by Soniaji’s regime and being taken around the country to hold programmes that aim at encouraging conversions into Christianity. The most important point is that the Visa of Mr. Youngren being a Conference Visa he can only participate in programmes of Government institutions by prior permission of the Ministry of External Affairs and the Ministry of Home Affairs of the Government of Bharat. But defying all laws his programmes are being organized independently and illegally. The laws of Bharat have not permitted him to convert people through the farcical ‘Changai Sabhas’. The Missionary Visa has been banned in Bharat since 1969. But it is being openly flouted by Soniaji’s regime.

In Prayag (Allahabad) pressures and protests were mounted by democratic processes through courts of law and administrative machinery against this illegal activity of Mr. Youngren. But the dance of cruelty the Government showed against the peaceful democratic protesters brings to mind the oppressive strategies the British Raj in Bharat adopted against the patriots of the country. The holistic, altruistic and syncretic Rishi-Krishi culture (Kulaachaar) that has been cultivated and developed for thousands of years in Bharat is now under attacks through ‘Changai programmes’ from the forces of conversion under government patronage to slaughter it. There was a long span of several centuries when the Jihadis took upon themselves to destroy and uproot our Temples and the Dharma-based traditions to replace it by their Jihad-based desert tradition. But today the whole of Bharat is ready to counter such forces for the cause of protection of Dharma and Culture of Bharat and it is evident from the protests held by over 10,000 young people in Allahabad against the illegal activities of Mr Youngren. Today frightened by the popularity of Narendra Modi amongst the people, especially amongst the young people, various efforts are being made to misguide and misdirect the society. But the awakened people of Bharat can now see through the game plans and evil activities of the outlandish forces.

Fri Nov 15 , 2013
Bangalore Nov 15:  Saavayava Krishi Parivaar is organized Organic Mela from  November 15th afternoon to Nov.17th afternoon at Keshavashilpa, Rashtrothhana Parishat, Kempegowdanagar,  Chamarajpete Bangalore. The event began on Friday afternoon. Organic Mela is unique concept where in the consumers can directly interact with the farmers and buy their produces. All the products are grown on organic farms with ZERO […] 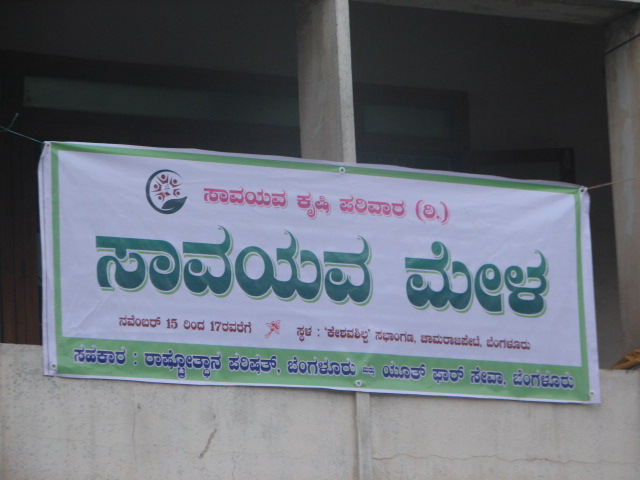