Skip to content
Chennai: The congregation of Saints and Sadhus was held at Chennai on 5.1.2013. Hundreds of Sadhus and saints of Tamilnadu participated in the convention.  Shri Ashok Singal, International Advisor VHP along with Ragava Reddy, International President of VHP participated in the congregation of Saints and Sadhus.  Sri Jayendra Saraswathi Swami of Kanchipuram Mutt presided over the convention. Five Major resolutions on ‘No Masjid will be allowed in temple city of Ayodhya’, to enact anti-conversion laws’, ‘to put an end to caste conflicts’, ‘Prohibition of Cow Slaughter’, ‘Protect Sacredness of Holy River’ were passed.
The congregation of Saints and Sadhus strongly condemned the article published by ‘The Hindu’ denigrating Swami Vivekananda.  They raised their voices demanding public apology by the Editor.
Speaking to the reporters after the congregation of Saints and Sadhus, Ashok Singhal said “This year around 10 crores of people are expected to participate on the upcoming Kumbhmela. Buddhist monks and Sikh saints including the Dalai Lama had given their consent to participate in the congregation.  Big decisions are expected to be taken at Kumbh Mela.”
Sri Ashok Singhal further said “ Ours is a spiritual country. The real identity is the essence of our spirituality within.  India is not the real name.  Bharat is the real name.  The new model of social life is of western culture which has been thrusted upon us by Britishers”.  He further questioned that, “Out of 17 crores of cows which were there during independence, only 8 crores of cows are there now and what about the rest of the cows? Cow is sacred and essential for the growth of agriculture.  He further cautioned that there is a serious plan going on to declare Ganga as a dead river which flows in Delhi.
Answering to the questions raised by the reporters on life-style being followed, “This live-in relationships, is a western model. Virginity was preserved (before the British era), but purity has been totally disturbed by these models,…we are losing it”. He further blamed the ‘western model’ of lifestyle for growing incidents of sexual assault on women including rape, saying cities were losing the values. He termed as “alarming” the western model of living, which he said had been imbibed from the US. “What is happening is we have imbibed the US. We have lost all the values we had in cities,” told reporters in response to a question on the growing rape incidents in the country. On questions raised on the contentious Ram Janma Bhoomi issue, he said the congregation of Saints and Sadhus Conference had resolved to that effect. Shri Ashok Singhal addressed a gathering on ‘Challenges before the resurgent Hindu Society’.  Sri RBVS Manian gave an introductory speech and explained the activities carried on by VHP and how the dream of Swami Vivekananda to have Hindu organization came to existence by forming VHP. Sri Raghav Reddy insisted on that we should have a united Hindu and not divided Hindu.  Shri Pejawar Mutt Swami Ji of Udipi, cautioned the dangers of Conversion, Terrorism and the Government standards in dealing with Hindus.  He emphasized that ‘Sangh hai Sakthi Kaliyuge’. Shri Ashok singhal Ji dealt in the dangers of the divided Hindus.  Common civil code which is not followed by the Muslims thereby increasing the population from 9.33% to 18% is a threat posing the society.  He further said that the congregation of Saints and Sadhus raised their voices to Hindus not to follow the Common Civil code of limiting with two children. He also cautioned about the danger of declaring Ganga as a dead river in Delhi. 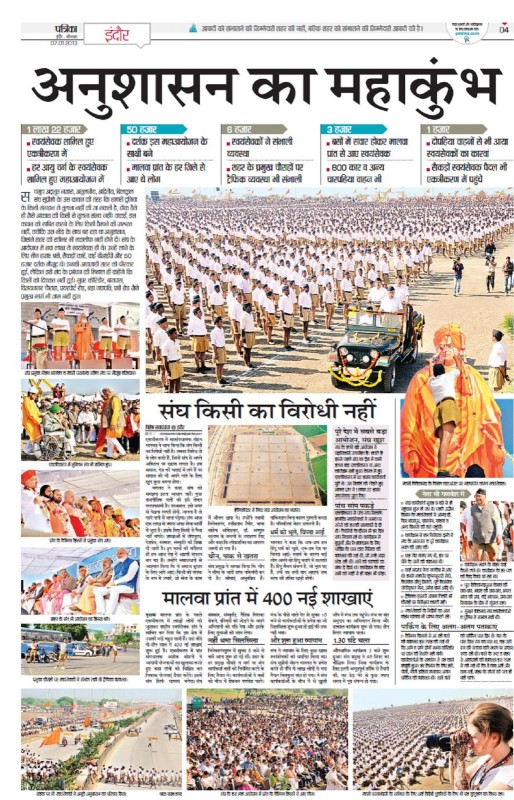