Clamping down on the proposed yatra, the UP govt also arrested seniorVHP leader Praveen Togadia on Sunday morning after he defied prohibitory orders.

Dr Pravin Togadia was arrested from Gola ghat in Ayodhya.

Earlier, setting the stage for a confrontation with the UP government,VHP inaugurated its controversial yatra from Ayodhya amidst a massive crackdown launched by the administration which has arrested over 500 people including a former BJP MP and a sitting MLA. “We have inaugurated the yatra. But this yatra should not be politicised. It is carried out all 12 months (not time bound),” Gopaldas said.

Ahead of the start of the yatra, former BJP MP Ram Vilas Vedanti and sitting MLA Ram Chandra Yadav were arrested early on Sunday.

Vedanti was arrested around 7am when he had left his house here for the parikrama, police said, adding MLA Ram Chandra Yadav was also arrested from here.

The town has been under heavy security cover as VHP declared that it will go ahead with the yatra, which has been banned by the ruling Samajwadi Party government fearing a communal flare-up.

A curfew-like situation is prevailing in the town as shops have been shut and Naya Ghat area has been cordoned off.

Cracking down on the yatra, police have already arrested over 500 VHP supporters and office bearers from across the state.

“Over 500 persons going to participate in the yatra have been arrested from across the state, where tight security arrangements are in place to prevent the proposed yatra. Anyone going for the yatra will be arrested as it has been banned by the government,” ADG, law and order Arun Kumar said.

Rashtriya Swayamsevak Sangh (RSS), the parent body of Vishwa Hindu Parishad, has severely condemned the UP govt’s ban on Kosi Parikrama Yatra. RSS Leader Ram Madhav said “UP govt’s action of arresting Saints and others is deplorable. Such high handed behavior has no place in democracy. Peaceful religious activity is a constitutional right of every citizen. UP govt is acting like a dictator. UP govt decision to ban 84-Kosi Parikrama of the Saints unfortunate uncalled for. An assault on d fundamental right to religion of Hindus”

RSS lead Sangh Parivar to hold massive protest across the nation tomorrow, August 26th 2013. ‘In Bangalore the protest will be held in front of TownHall at 10.30am in which hundreds of supporters for Ayodhya Ram Mandir, will participate’ said Keshava Hegade, VHP Chief of Karnataka.
(With inputs from TOI/PTI)

Mon Aug 26 , 2013
After a nation-wide protest, which also sounded in Parliament, VHP Veteran Ashok Singhal, Dr Togadia was released from Police arrest today evening. However UP Govt has not lifted the ban on AYODHYA Parikrama Yatra of VHP. Allahabad High Court on Monday ordered the release of all the arrested Vishwa Hindu Parishad […] 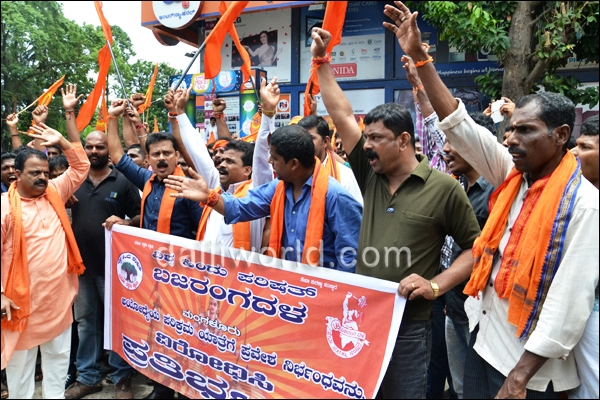