By Apoorva Dutt in FIRSTPOST

San Diego: A California judge refused on Monday to block the teaching of yoga as part of a public school’s physical fitness program, rejecting parents’ claims that the classes were an unconstitutional promotion of Eastern religions.

Judge John Meyer acknowledged that yoga “at its roots is religious” but added that the modern practice of yoga, despite its origins in Hindu philosophy, is deeply engrained in secular U.S. society and “is a distinctly American cultural phenomenon.”

He also said the Encinitas Unified School District had developed its own version of yoga that was not religious but distinct and separate from Ashtanga yoga.

“A reasonable student would not objectively perceive that Encinitas School District yoga does advance or promote religion,” he said.

While school district officials were pleased by the ruling, the lawyer for the parents said they probably will appeal.

“If yoga is a religion and has religious aspects, it doesn’t belong in the public schools,” said Dean Broyles, who represents Stephen and Jennifer Sedlock, whose two children opted out of yoga for physical education. “There is a consistent anti-Christian bias in these cases and a pro-Eastern or strange religion bias.”

The Sedlocks filed suit against the district in February, arguing that yoga is inherently religious and asking teaching of the classes be banned. The parents claimed that children who opted out of the program faced bullying and teasing.

Their suit expressed concern that the school district had implemented the program with a $500,000 grant from the Jois Foundation, which promotes Ashtanga yoga.

The case was the latest twist in a broader national clash over the separation of religion from public education that has seen spirited debate on issues ranging from the permissibility of student-led prayer to whether science instructors can teach alternatives to evolution.

The plaintiffs objected to eight-limbed tree posters with Sanskrit characters that they said were derived from Hindu beliefs, as well as to the use of the Namaste greeting in class and several yoga poses said to represent worship of Hindu deities.

But by the start of the 2012-2013 school year, the Sanskrit and Namaste had been eliminated from the program, and poses had been renamed with “kid-friendly” descriptions, poses now called gorilla, turtle, peacock, big toe, telephone and other terms, according to testimony. The lotus pose, for example, is called criss cross apple sauce in Encinitas schools.

However, the plaintiffs’ expert, professor of religious studies Candy Gunther Brown, testified that yoga practice indoctrinates Hindu religious practices whether the individual knows it or not.

The judge did not agree with her, saying, “Dr. Brown has an obvious bias and can almost be called being on a mission against yoga.”

School district Superintendent Timothy Baird applauded the ruling, and pointed out that the district had been represented for free by lawyers provided by parents whose kids take yoga in the district.

“We always want our parents to be happy and we try to work with our parents on everything we do,” Baird said.

Tue Jul 2 , 2013
Hindu Munnani Bandh was peaceful Vellore, Tamilnadu July-2: Brutal murder of Hindu Munnani state Secretary Sri Vellaiyappan at Vellore, has sent shock waves among in the society.  Hindu Munnani had called for a Bandh to mark the protest of such killings.  Bandh was observed at various districts of Tamilnadu. According to Sri Manohar, […] 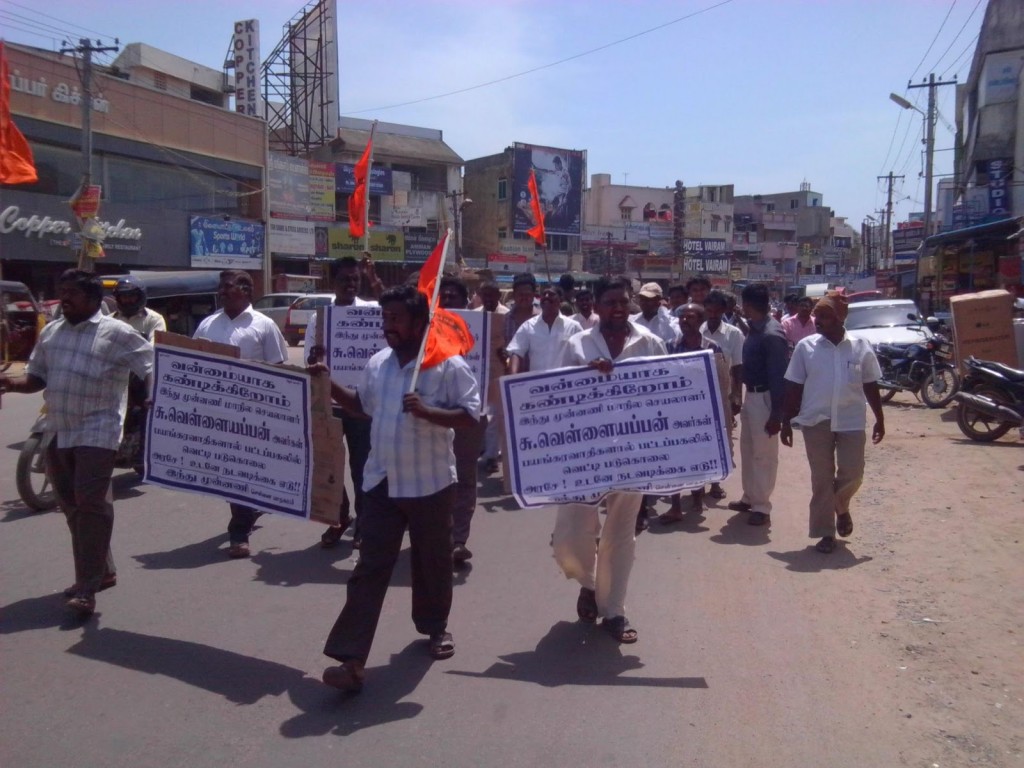