P. P.  Sarsanghchalakji, respected all India office bearers, respected members of Akhil Bharatiya Karyakari Mandal (National Executive), respected Sanghchaalakji, and my colleague Karyavah of respective states and regions, members  of Akhil Bharatiya Pratinidhi Sabha (National collegium of delegates), and distinguished sisters and brothers involved in various segments of social activities; I extend my heartfelt welcome you all in this important historic city of Jaipur for this Pratinidhi Sabha of Yugabd 5114 and March 2013.

At the outset, we remember with respect, all those great human beings who dedicated their whole life for the wellbeing of our nation and have left us during the year.  Shri Shrikantji  Joshi, who successfully took up any responsibility given to him by Rashtriya Swayamsevak Sangh and worked hard  with complete dedication and concentration; left us working till the last moments of his life. Spreading happiness and smiles, Karmyayogi Shri Surendra Singhji  Chauhan, who presented us with a successful model of ‘model’ village with his thoughts and hard work, left for his heavenly abode after a brief illness. A person with gifted and deep intellect, Shri Bapusaheb Kendurkar from Pune left us even as he worked for the society till his last breath. Former Organising Secretary of Bharatiya Kisan Sangh Shri Nanaji Joshi, Pune, who worked throughout his life like an ascetic even as he carried out his family responsibilities, is also no more with us.

A pracharak from  earlier generation who faced and overcame adversities with his calm and sweet nature, Shri Bhaiyyaji Gaadhe, Shri Nana Laabhe an ideal example of simple living, high thinking who inspired people all over the country for  improvement of hand writing system and travelled tirelessly through life, left us suddenly;  senior prachaarak from Nagpur, soft spoken Shri Sharadrao Chauthaiwale who bore with physical pains cheerfully – absence of these brother colleagues shall always sit heavy on our hearts.

Sadguru Shri Jagjit Singhji  Namdhari, who was associated Vishwa Hindu Parishad since its inception and had a respectful place in the hearts of disciples  brethren, Highly revered seer of Adichunchangiri Math P.P. Balgangadharanathji, who attained highly respected place in the society ; left for their heavenly abodes, leaving behind their grieving followers.

Former veteran pracharak, Shri Kailashpati Mishra who was Finance Minister in Bihar government and governor of Gujarat and Rajasthan; Shri Devakinandan Mathur who played a stellar role in Bharat Vikas Parishad’s growth and rehabilitation of physically handicapped in South Bihar, Shri Sudheerji Davande, treasurer of Vidarbha Prant of Saksham  left this world, working for the cause till the end.

Founder Chairman of Cadilla Pharma, and renowned world over, Shri Indravadan Modi passed away at the age of 87.

Shrimati Jashuben Shilpi from Gujarat, whose sculpting was recognized and appreciated world over, and who made sculptures of many Indian leaders is no more with us.

Chancellor of Guwahati University, Marxist intellectual, and one who led many agitations, Shri Dev Prasad Barooah; Shri Sitaram Sutia, who played important role in struggle for independence and was involved with the biggest religious movement Shriman Shankar Dev Sangh completed their journey on Earth.

People who died during the sacred Kumbh in Prayag due to mismanagement, people who suffered due to various terrorist attacks, our soldiers who sacrificed their lives on Kashmir border due to in human treatment meted out by Pakistanis; all these pious souls will always be remembered by us. Incidents took place in Delhi and other parts of country of Women’s molestation and then murder are very painful.

Akhil Bharatiya Pratinidhi Sabha condoles the deaths of all such known and unknown brethren, and presents its respectful tribute to these great souls.

According to the information collected from all over Bharat, 42981 Shakhas are being run in 28788 places.  Sangh work is also being carried through 9557 Saptahik Milans (weekly get togethers) and 7178 Sanghmandlis (monthly get togethers).

Good plans have been made in all the states this year for expanding Sangh shakhas. As a result there has been growth in shakha work both in terms of quantity and quality.  Everybody will have to pay attention to stability and quality of shakhas so this momentum carries on.

Training workshops for karyakartas were arranged so they could participate in TV debates and discussions. Around 100 brothers and sisters took part in TV debates in 50 different channels in different States.

182 journalists in 82 places were felicitated on the occasion of Naarad Jayanti. Intellectuals and journalists were present in good numbers in all these programmes. This programme was organized by Vishwa Samvad Kendra in coordination with Prachar Vibhag.

31 Jagaran patrikas are reaching 1.7 lac villages all over Bharat broadcasting news and nationalist views to these villages.

Well planned approach to ‘Social media’ has seen good number of people willing to join Sangh through its website. Around 1500 people have shown interest in joining Sangh each month through the site.

In the preparatory phase of  this programme, 247 short term vistaaraks (full time volunteers) left homes, while  457 karyakartas worked full time for preparations though  they stayed at home, and over 15000 swayamevak gatnayaks (team  leaders) worked tirelessly. Their efforts resulted in the success of this massive programme.

One thing worth mentioning about the programmes organized by Malwa and Dakshin Karnataka is that these huge get-togethers were organized only on the basis of oral instructions and messages; without resorting to any printed literature. Strength of organizational structure of Sangh was illustrated through these programmes. Both the programmes and programmes held in Kolkata and Poorva Andhra saw the presence of respected P.P.Sarsanghchalakji.

All the above programmes give us glimpse of organizational might of Sangh.  We are confident that follow up action plans are also being worked out carefully in all these places. These programmes also indicate the future growth of our work. All these programmes saw positive participation and support of citizens and media.

Year 2012-13 saw some important events taking place in our country. Some events are inspiring while some subjects need awakening and thinking is required at all levels of the society.

It would be a mistake to look at the recent widespread rioting in Kokrajhar as only a local dispute. This incident should be looked at as a part of an elaborate conspiracy.  These rounds of violence have been going on for years in Assam, but infiltrators had to face strong opposition for the first time and had to vacate some areas.  To counter this, these elements made a show of strength with the help of their local supporters, and the incident was no more limited to that region but spread as far as Mumbai, where these supporters staged violent protests under the agies of Raza Academy and challenged the citizens of this country openly.  There were attempts by these elements to threaten and force people from North East studying or employed in various parts of the country, to return to their own native place. Sangh Swayamsevaks and members of organization inspired by Sangh made all efforts for the youths of Norh East in cities like Pune, Bangalore, Chennai, Hyderabad, Delhi etc. It is unfortunate that so called secularists are raising the fear of threat to security of minorities and refuse to recognize this dire challenge.

The recent attacks on temples and Hindu settlements in 24 Pragana District and the bomb blasts in Bhagyanagar (Hyderabad) reflect the growing Islamic extremism. Post hanging of terrorist Afzal Guru, the statements and reactions issued by the Chief Minister of Jammu & Kashmir and other leaders are a matter of concern.

How can social life are secured against the distortions that have come about in our society in the name of modernization. Can the situation change by putting the responsibility on security system or policing and improving law and order situation?

Social, Educational and religious institutions will have to ponder over their role in the society. Answer to this problem will be found in following ethical and moral life style.

An age limit of 18 years to 35 years was set for the participants. Efforts were made that all the districts of India be represented in this exercise. 5679 youth from nearly all the districts participated in this programme. International borders pass through 15 states of our country. Young volunteers reached the borders in all the states. They took along sacred waters of their respective places and took back sacred

soil of the border which they visited. Human chain called ‘Seema Suraksha Shrinkhala’ was formed along with the local residents. 1,08,105 local brothers and sisters participated in this human chain.  7700 volunteers participated in managing the programme. This programme was successful in awakening the youth about the security of our borders.

‘Vishal Hindu Sangam’ was organized in the tribal area in Bodla village in Chhattisgarh state as a part of 150th anniversary celebrations.  On the auspicious occasion of ‘MauniAmavasya’ (Magh Krishna amavasya) on 10th February 2013, highly revered Shankaracharya Vasudevanand Saraswati, respected P.P.Sarsanghchalakji and Chief Minister Of the State graced the Hindu Sangam. 1, 25,000 villagers from 1500 villages attended this grand event.  Strong feeling of Hindutva and an organized power rising above all the differences is the only answer to the problems of Naxalims, conversions, social inequity; this was the message that was successfully conveyed by this massive Sangam.

In Srilanka on this occasion of Shaardh Shati Samoroh Hindu Sangam was organized. Presence of 10,000 people and reponse to other programmes was cheerful.

We hope that the forthcoming programmes will also see similar level of impressive social participation by common people. The indications we get from the success of these programmes tell us that understanding the relevance of message of Swami Vivekanand in present times even after lapse of 150 years, society should stand up with resolve on its strong foundations of its own intellectual prowess.

As per ruling of Lucknow bench of Allahabad High Court pronounced on 30 Sep, 2010, it is clear that the very place where ‘Ram lalaa’ resides now, is the birth place of Lord Ram. This place should now be handed over to Hindus as per promise made by Muslim society earlier before the judgment, and way be paved for a grand temple there. But, Hindu society feels that hurdles have not yet been cleared. Margdarshak Mandal has passed a resolution appealing for Mahajagaran (grand awakening) and Maha anushthan (grand programme). Respected Sants expect Hindu society to put in all its strength to make these programmes successful. Respected Sants firmly believe that such an awakened power alone can pave the way for construction of the grand temple.

We are celebrating 150th birth anniversary of Swami Vivekanand this year.  His thoughts inspire us and give us energy and strength. Therefore, we should study his thoughts regularly.

Swami ji says, “If we were to analyse our failure critically, we shall come to the conclusion that in 99% cases, reason is that we did not pay attention to the resources. It is necessary that we pay attention to the strength, purity and completeness of means. We should have faith that if means are correct, then goal shall be achieved.”

Our means are our shakha and the swayamsevak moulded through it. More accomplished this resource is, more would be chances of our dream of prosperous nation getting fulfilled.

Fri Mar 15 , 2013
Jaipur, March 15, 2013:  Speaking to the reporters in the press conference at Akhil Bhartiya Pratibidhi Sabha (which was inaugurated this morning), RSS Sahsarkaryavah Shri Dattatrey Hosbole Ji told that there are about 1395 members participating in the Akhil Bhartiya Pratinidhi Sabha from all over Bharat. In this meeting qualitative and quantitative […] 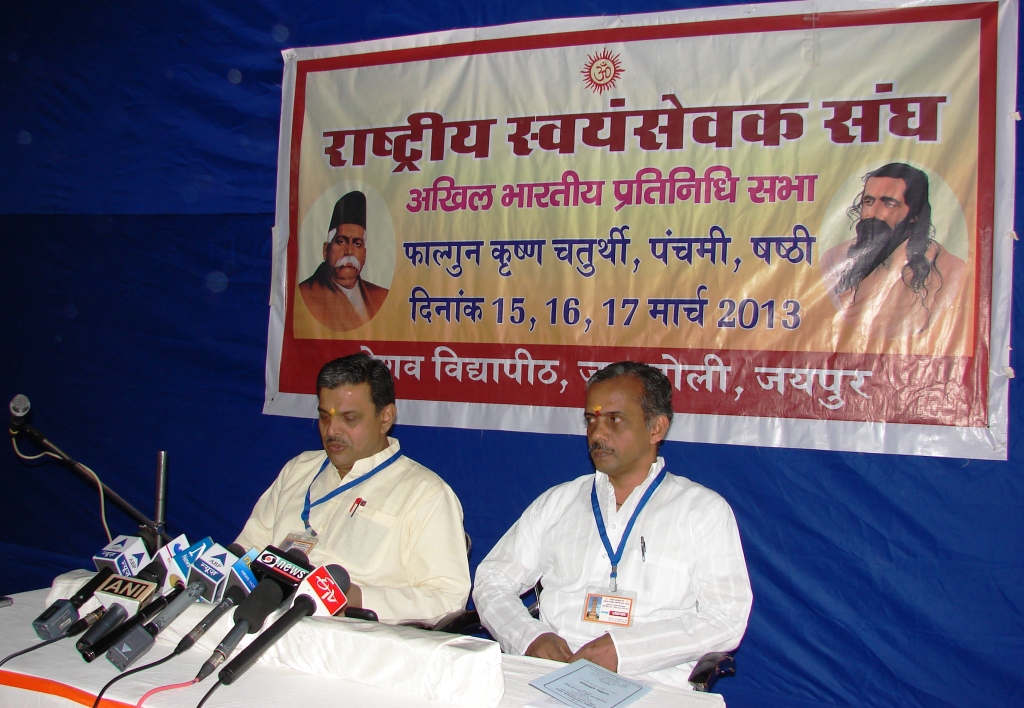