New Delhi, August 03, 2013 – Leading figures of the Sant Fraternity from all the States of Bharat came together in a meeting of the Central Margdarshak Mandal held at Haridwar on June 11-12, 2013. The meeting ran for two days and the issue of Sri Ram Janma Bhumi Temple construction determined the agenda of both the days of cogitations and its four sessions saw three action items that were prescribed by the Sant Community. The first action item would see the participation of the Sant Fraternity itself whereby, for the cause of national awakening, they would be undertaking a 20-day Yatra programme between 25th August and 13th September, 2013, covering the scriptural/traditional spirituo-cultural boundary of Ayodhya which is also known as the 84-Kos Parikrama.

It is their view that the circumambulation of a Teerthsthan (Ford of Liberation) in the country can be undertaken at any time of the year as any time is a good time for such a purpose – this they asserted as a rebuff to those uninformed ones who hold that ‘A Parikrama has a specific Tithi”. This tradition of all time Parikrama has been in vogue in the Northern, Southern, Eastern, Western and Central parts of Bharat for thousands of years – in spite of the fact that during the Muslim Raj it was hindered at times – but again during the British Raj it gained currency all year round – in many forms, e.g.., the famous Giri Govardhan Parikrama in Braj Mandal, Kamadgiri Parikrama in Chitrakoot, Thiruvannamalai Parikrama of the sacred Arunachala Hill in Tamil Nadu, &c. As per a tight itinerary, Sants from all the States of Bharat would register their live participation for a day each in the Parikrama Yatra. There would also be many a Sant who would cover the entire Yatra. As per the tradition, Bhajans-Kirtans, Pravachans, Sangat-Pangat, holy dips and Darshans of holy sites, temples, water bodies, forests, etc., would be the highlight of the Parikrama Yatra. During this 20-day Yatra forty camping sites for lunch, dinner and overnight stay have been fixed. The date-wise Yatra itinerary is attached hereby.

This Yatra would also underline the point that 485 years ago in 1528 CE the Temple of Nativity of our National Protagonist Sri Ram at His birthplace in Ayodhya was demolished by an antagonist invader to undermine our national culture and he parked an offensive structure at our temple site as a statement of his victory. Ever since, in their efforts to liberate the site from foreign occupation, 300,000 lion-hearts of our country sacrificed their lives in 76 field battles that continued for 400+ years. The battle for the site in the Courts of Law also continued for 60+ years. Finally, the Allahabad High Court (Special Bench, Lucknow) gave the verdict that: “1. The disputed site is the birth place of Lord Rama. Place of birth is a juristic person and is a deity. It is personified as the spirit of divine worshipped as birth place of Lord Rama as a child. Spirit of divine ever remains present everywhere at all times for anyone to invoke at any shape or form in accordance with his own aspirations and it can be shapeless and formless also. 2. The disputed building was constructed by Babar, it was built against the tenets of Islam. Thus, it cannot have the character of a mosque. 3. The disputed structure was constructed on the site of old structure after demolition of the same. The Archaeological Survey of India has proved that the structure was a massive Hindu religious structure…”. The Hindu society has got this victory after 485 years of field and court battles. It would, therefore, never accept any new mosque or Muslim monument or Islamic Cultural Centre within the scriptural/traditional boundaries of Ayodhya as Ayodhya is to Hindus as Mecca is to Muslims and sure enough any such new structure would remind the antagonistic character of the Babri structure to our national protagonist and become a perpetual point of Hindu-Muslim spat.

This Yatra is being undertaken for the cause of Peace and Dharma Jagaran and the Sant Fraternity would lead it from the beginning to the end. The world knows that the Sants are by nature Peace-loving. We would therefore request the Uttar Pradesh Government and the Administration not to either allow any obstruction to this Yatra or obstruct it themselves.

Reminding the Central Government of its commitment given through an affidavit to the Hon’ble Supreme Court on 14th September, 1994 that read: “… If the question referred (Presidential Reference to the Apex Court –Ed.) is answered in the affirmative, namely, that a Hindu temple/structure did exist prior to the construction of the demolished structure, government action will be in support of the wishes of the Hindu community…” the Sants want that the Government should honour its word by introducing a legislation to the effect in the Monsoon Session of Parliament starting from 05th August, 2013. If the Government does not do it, then the Hindu society would take a Maha-Sankalp to express its resolve on the banks of the holy Sarayu at Ayodhya on 18th October, 2013.

In between these two programmes, the Venerable Sants from all the Southern States would undertake Panch-Kosi Parikrama along with the Ram Devotees from the South for the cause of construction of a grand temple at Sri Rama Janma Bhumi.

Sun Aug 4 , 2013
Bangalore August 03: “A stimulating afternoon with very vigorous ideas shared.  Enjoyed the gathering and the wise words of the speakers” Said Mrs Anitha a journalist from Chikkallasandra, Bengaluru. She was addressing a special Panel discussion organised by Samvardhini, an Women’s forum for intellectual dialogue in Daly Memorial Hall of […] 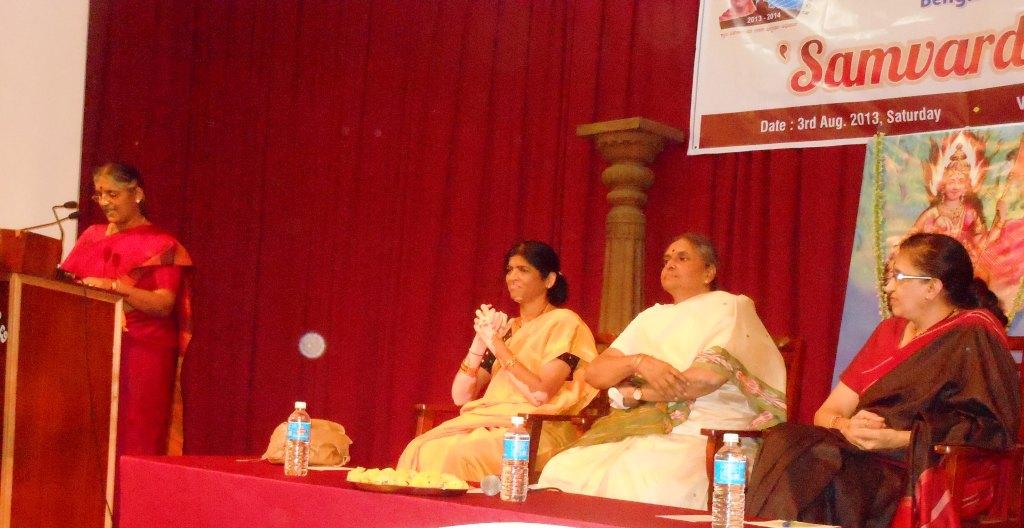