Mumbai/Bangalore Aug 28: Founded in August 29 of 1964 on the auspicious day of Sri Krishna Janmasthami, to organise – consolidate the Hindu society and to serve – protect the Hindu Dharma, VISHWA HINDU PARISHAD (VHP) today turned 49.

VHP, which was on national headlines since a week related to its 84-Kosi Parikrama Yatra to Ayodhya, has witnessed and lead several socio-religious movements successfully since its day of inception so far. However, the agitation of Ram Mandir is still on, yet to reach successful end. VHP already seeked the help of entire Hindu society in this regard, and gained a huge support too. Judicial aspects are a matter of concern ahead of VHP as far as Ram Mandir construction is concerned.

VHP began as an outfit of  Rashtriya Swayamsevak Sangh (RSS) in 1964. VHP considered as one of top organisation of  Sanghparivar which follows core Hindutva Ideology. Its slogan is Dharmo rakṣati rakṣitaḥ, which means “Dharma protects its protector” and its symbol is the banyan tree. The current international president of VHP is G. Raghava Reddy, while its executive president is Dr. Praveen Togadia.

The VHP volunteers are known for their efforts to promote and revive Hinduism and to develop unity and pride among all Hindus by its social service projects, encouraging the construction and renovation of Hindu temples, campaigning against social evils and orthodox practices in Hinduism like the caste system, opposing cow slaughter and conversions to other religions and taking up issues in the interest of Hindus such as resolving the Ayodhya dispute.

VHP was founded in 1964, August 29th by the leadership of then RSS Sarasanghachalak Madhava Sadashiva Golwalkar.  Keshavram Kashiram Shastri,  Swami Chinmayananda, former RSS member S.S. Apte, Supreme Spiritual Head of the Namdhari Sikhs Sri Satguru Jagjit Singh Ji and Sikh leader Master Tara Singh were the founder members. Swami Chinmayananda was nominated as its founding President, while Apte was nominated as its founding General Secretary. The VHP, which considers Buddhists, Jains and Sikhs as part of the greater Hindu fraternity, officially mentions that it was founded by the “Saint Shakti of Bharat”.

VHP was first mooted at a conference in Pawai, Sandipani Sadhanalaya, Mumbai on 29 August 1964.

This conference was hosted by RSS Sarsanghchalak M. S. Golwalkar. The date was chosen to coincide with the festival of Janmashtami. Several representatives from the Hindu, Sikh, Buddhist and Jain faiths were present in the meeting, as well as the Dalai Lama. Golwalkar explained that “all faiths of Indian origins need to unite”, saying that the word “Hindu” (i.e. people of “Hindustan”) applied to adherents of all the above religions.

It was decided at the meeting that the name of the proposed organization would be Vishva Hindu Parishad and that a world convention of Hindus was to be held at Prayag (Allahabad) during Kumbha Mela of 1966 to launch the organization. It was further decided that it would be a non-political organization and that no office bearer of any political party shall be simultaneously an office bearer in the Parishad. The following aims and objectives were set before the Parishad.

In 1969, Vishwa Hindu Parishad organised a mammoth Santh Sammelan (SConference of Saints, Sadhus) at Udupi of Karnataka which was a historic meet to achieve social hormony. The summary of this historic conclave was given via 2 major sankrit slogans as ‘Na Hindu Patito Bhaveth’ (No Hindu is Backward by any means) and ‘Hindava Sodarah Sarve’ (All Hindus are brothers among each other). The then RSS Sarasancghalak M.S.Golwalkar was the key person to hold this conclave. Sri Bharanayya, an IAS officer, who hails from Dalit background was the President of Santh Sammelan. The hug between Golwalkar and Bharanayya was declared by the media as ‘Hug of the century’ (In Kannada: Shatamaanada Appuge). The conference was highly influential to eradicate casteism, untouchability in Hindu society to a great extent.

Bajrang Dal is the youth wing of the VHP, and it is organized in many states in major training camps called shakhas, where thousands of young men simultaneously train in various activities, receive sports, indoctrination in hindutwa and cultural education. The Durga Vahini, founded in 1991 under the tutelage of Sadhvi Rithambara as its founding chairperson and the support of the VHP, is described as the “female arm of the Dal”, dedicated  for the spiritual, physical, mental and knowledge development”.

The VHP also have divisions made up of women like ‘VHP Mathru Mandali’, works for the unity of Hindu women across Bharatth.

The VHP has been a prime backer of the World Hindu Conference in which issues such as casteism, sectarianism, and the future of Hindus were discussed. Prior Conferences have included Hindu Groups such as Parisada Hindu Dharma.

Wed Aug 28 , 2013
Bangalore August 28: Veteran RSS Pracharak Mai Cha Jayadev released book by noted Columnist Pratap Simha in at Keshavakrupa, RSS State headquarters on Monday evening. The book is the 16th edition of  ‘Bettale Jagattu’; the compilation of article by Pratap Simha which penned in his articles of his  most popular column […] 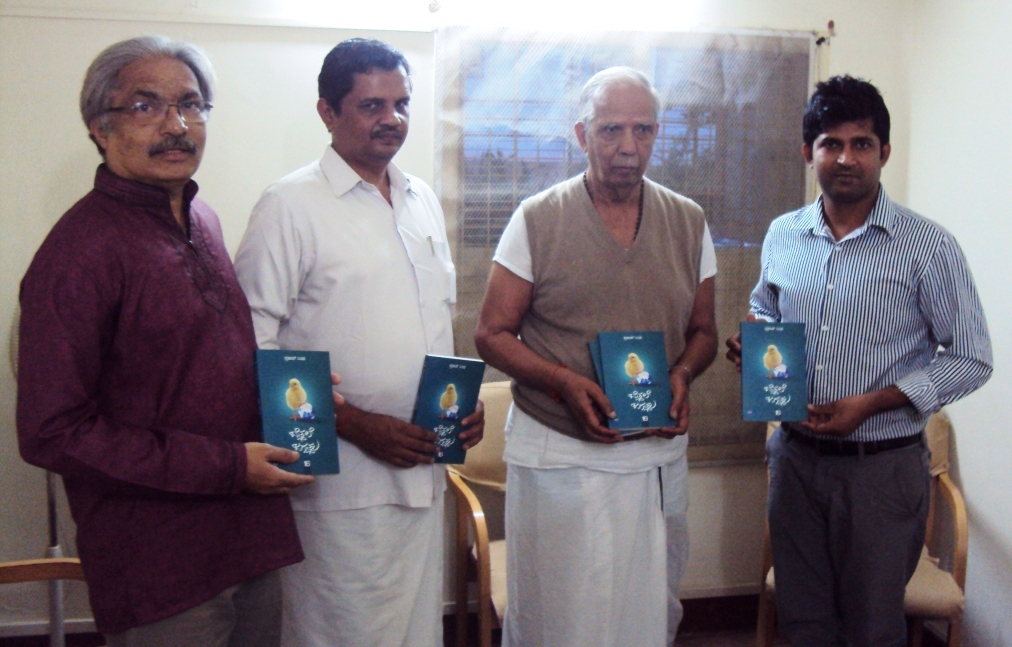