Ernakulam July 14: 38th State conference of Balagokulam was held successfully at Kochi of Kerala. The conference was inaugurated by Goa Chief Minister Manohar Parikkar in a traditional style by garlanding Lord Krishna’s statue. In his brief speech Parikkar endorsed the efforts Balagokulam Unit in imbuing values, patriotic concerns among children of entire state.

Noted Malayalam Actress Kaviyoor Ponnamma was the Chief Guest for the ceremony. Ponnamma congratulated and appreciated the works and activities of Balagokulam in Kerala. 'BJP and RSS are Independent of Each Other': RSS leader Ram Madhav's Interview with ET

Mon Jul 15 , 2013
Amaravati; July 15: In an interview with Economic Times, Ram Madhav, senior Functionary of RSS, talks about the organizational structure of BJP and RSS, and maintains that the two are independent of each other.   Excerpts: How do you respond to the allegations that the Rashtriya Swayamsevak Sanghmicromanages the affairs of BJP?  […] 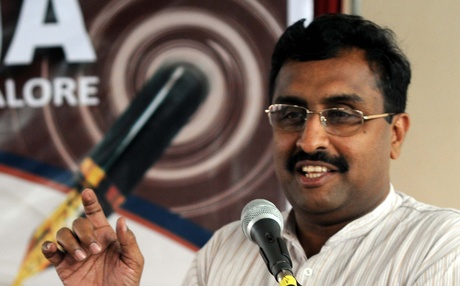