Ram Madhav further said, “Post 1962 war, India should have thought seriously on these issues. But unfortunately there was no such serious measures. Our neighbour Pakistan has illegally occupied 42,000 km of our land. Though we had the ability, our then Prime Minister Nehru took these issue to UNO to project himself as a peace-lover. Till date that land is occupied by Pakistan. Of the 42000, Pakistan has gifted 5000km of land to China to improve their mutual relations”. Pakistan and China; together formed Vyooh in all 4 directions around India. Under this circumstance, the most important zone like Siachin is under China’s control, is serious matter of concern’, he said.

Ram Madhav also slammed the govt proposal to give 10000 acre land for Bangladesh.

Ram Madhav also emphasised Swami Vivekananda’s Message and its relevance in India’s security. In his message for India, he lamented that our living does not deserve a great religion like Hinduism as people have become lazy and self centered. He explained how this ‘aalasya’ has led to the internalization of corruption. This menace has become so deeprooted that it has engulfed all spheres of life even compromising our national security. In spite of the intellectual and technological brilliance the lack of will power has made India an import dependant country even for its defense needs. Citing the example of Chanakya he said what we need is a Culture of Strategic Thought and not a nature of criticism and

argumentativeness. Drawing upon our experience with China, Pakistan and Bangladesh, he wondered how the rulers continue to believe in romantic sloganeering and a life of compromise rather than being pragmatic and develop a national will power in the context,  the example of Jews reclaiming Israel even after 2000 years of eviction was remarkable. If china could build a 4000 kms wall over 100 years, how is that India could never block the Khybar Pass, the only passage of invasion to India throughout History.

Speaking on corruption, he stated that mere laws and institutions can not eradicate corruption but the culture has to be built from below and the punishment should be taken at the top. It is indeed tragic that how our rulers are compromising Nation’s growth and security for the sake of global goodwill and in the name of illusive Peace. It is time we take note of our neighbors’ aggressive designs on India and develop a culture of determinism as propagated by Swami Vivekananda.  Quoting Swamiji, Ram Madhav said that we need men with muscles of Iron, nerves of Steel and a heart made of lighting and thunderbolt (Vajra Kathor Sankalpa) to take India into the future.

Thus, Swamiji’s life and message is more relevant today than ever and it is a matter of pride that his 150th  birth anniversary celebrations is being celebrated in more than 100 countries is a tribute to his timeless appeal.

In the meeting attended by over 500 people, Sri Gopal Jingouda presided and Sri L.K. Havanur welcomed the guests. Sri Parameshwar Hegde introduced the dignitaries and eminent personalities like Sri Suresh Hundre, Sri Suresh Angadi and others were present. 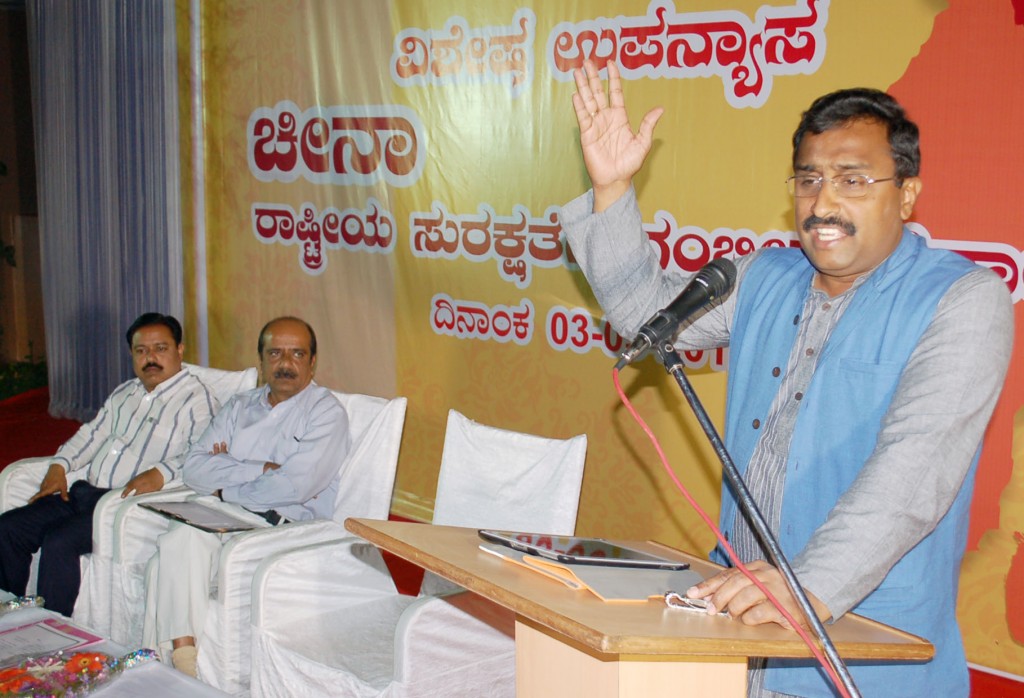