New Delhi. April 17, 2013: Inhuman nature of Pakistan today exposed before the world community when Pak Hindus narrated their heartfelt story of atrocities at the office of the United Nations in New Delhi. Pakistani Hindus in India lead by Vishwa Hindu Parishad(VHP) demonstrated before UN Office against violation of

their human rights in Pakistan.

Addressing the silent demonstrators the VHP state president shri Swadesh Pal Gupta & the vice president shri Mahavir Prasad said that abduction, rapes, attacks on houses & temples and large scale forced religious conversions are the common atrocities being faced by Pak Hindus. They have been forced to live like an animal and brutally being killed at many places. They have only three options before them that either accept Islam or leave Pakistan otherwise killed, they added. The demonstrators also submitted a memorandum to this effect to the UN secretary General to save the Hindu Human rights. Instead of living animal life in Pakistan, we would prefer to be killed at Indian soil, at least we will get last respect in Hindu way of life, which is not allowed in Pak, said shri Dharam Vir Bagari, the leader of Pak Hindus in Delhi. According to the media chief of VHP Delhi shri Vinod Bansal, the memorandum addressed to the Secretary General UNO demanded immediate intervention to stop attacks and rehabilitate the members of the Hindu minority living in Pakistan, and those who have been forced out of their ancestral homeland from different provinces of Pakistan. Giving figures, the memo also high lighted that the religious minority of Hindus in Pakistani that was around 23% of total population in 1947, is drastically reduced to less than 2% today due to continuous state sponsored terror acts like abductions, kidnaps, rapes, attacks on temples & lives etc. by Islamic zealots. Teenagers and temples are the soft targets of the Islamic fundamentals.

Shri Nahar Singh, the local warden of the Pak Hindus in Delhi and a social worker said that until the government give them proper facilities, I will continue to support all deprived refugees in Delhi like my family members. More then 200 Pak Hindus carrying play cards in their hands raised their voice and narrated their horrible stories to the media and the UN Human right watch about the persistent atrocities they faced in Pakistan. VHP state vice president shri Brij Mohan Sethi, Bajrang Dal’s state convener Shri Shiv Kumar & shri Neeraj Doneria, shri Rajeev Gupta and shri Vishnu Gupta were amongst the dignitaries addressed the demonstrators.

The 20 year old Jamuna said that we could not see any school in Pakistan because of bad elements and compulsory Islamic education. Recalling her old memories with tears, a 70 year old lady Mrs Laxmi Devi said ‘I could not recall that we have celebrated even Holi or Deepawali in last 40 years in Pakistan due to regular warnings & attacks by fundamentals’. We do not have the right even to cremate in Hindu ritual in PAK, she added

Fri Apr 19 , 2013
Nasik, Maharashtra, April 19, 2013 : Celebrating Ram Navami festival at Nasik, RSS Sarasanghachalak Mohan Bhagwat has said that the nation’s security is under threat due to ‘unfriendly attitude’ of its neighbouring countries. Without naming any country, Bhagwat said the growth and development of India is necessary for the welfare of […] 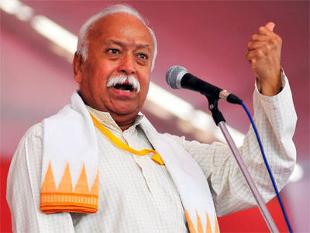