Thousands of residents of the area, business establishments, religious organisations, academic institutions etc welcomed the Shobha Yatra by presentation of bouquets and spreading of flowers petals, etc. The whole route was decorated with banners and welcome gates. The purpose of the year long celebrations is to spread the message of swami ji amongst all sections of society, particularly the Indian youth which is the future of the country. Swamiji’s message deals with comprehensive awakening of the nation; spiritual, economic, cultural, academic and industrial. Even though Swamiji is remembered the most through his Chicago “Brothers and Sisters of America” lecture, but his concerns about India, Indians and their portion in the world meet much beyond that iconic lecture. It is not widely known, for example that Swamiji was responsible for encouraging Tatas to establish Steal Factories to spur the industrial growth of the nation. Swamiji was also the initiator of the idea of establishing Indian Institute of Sciences. The Shobha Yatra was addressed by prominent spiritual, social and cultural leaders. Some of the prominent social and spiritual leaders who inspired the march included the renowned academic and spiritual thinker Dr. Pranav Pandya who also addressed the gathering before the start of the march. Others who participated included Shanta Atmanandji (Rama Krishna Ashram), Sh. P Parmeshwaran ji of Vivekanand Kendra Kanya Kumari, Pramila Taiji Medhe, Swami Vivekanathji of Valmiki Samaj, Swami Raghwanand ji and Swami Retambhranand ji. The March was blessed by Poojya Amma Ma Amritanandmayi ji. All the speakers emphasized the fact that for the reawakening of the nation, Swami ji should be the role model of the youth in the country. A large number of tablens depicting various aspects of the life and message of Swamiji (like Awake India & and Awaken the World, Rock Memorial, Rama Krishna Paramhans, Chicago lecture, etc) participated in the March. The Yatra was joined by a large number of schools and students, business organisations, farmers associations, labour unions, women organisations, cultural groups, diverse religions groups, artists, etc. More than hundred delegates from all followers of Swami Vivekanandji also participated.
The nodal agency of the year long Vivekanand 150 celebrations in the Vivekanand Foundation, New Delhi. The purpose of the celebrations is to revive the spirit of Vivekanand ji among all sections of the society across the length and breadth of the country. Schools and colleges, Universities, Villages,
Under privileged sections of society, women, sc’s/st’s North Eastern States, etc shall be mobilized to spread the message of Swamiji. It is aimed that more than 40 million (4 crore) households are contacted during the year long celebrations which will conclude on 12th Jan. 2014. 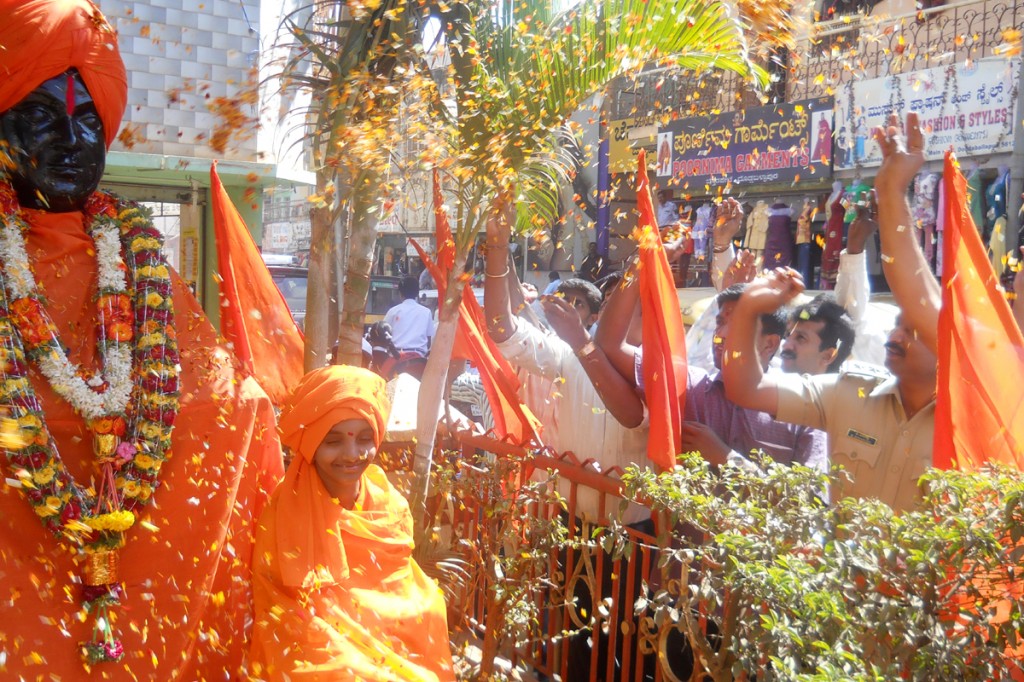