By Sandeep Mahapatra in ORGANISER

New Delhi: Top RSS Functionary (Sah-sarkaryawah of Rashtriya Swayamsewak Sangh), Dattatreya Hosabale said that in the changing times we should explore new dimensions of student and youth activism. New methods should be evolved and initiatives should be taken to draw youth towards social and national causes. He was speaking at the alumni meet of former students of Jawaharlal Nehru University who were associated with RSS and ABVP during their stint in JNU.

Dattaji spoke on the topic ‘Glorious Traditions of Nationalist Movement in JNU’. He in his speech mentioned three crises which we are facing in present times– crisis of character, crisis of leadership and crisis of consensus which is affecting our overall development. The solution propounded by him to overcome these crises was to have character, intellectual honesty and intellectualism combined with action in our life.

While addressing a gathering of more than 150 alumni and other audience in Convention Centre of JNU, Dattaji said that those who want to rule the entire world are spreading the thought that ideologies have become irrelevant and boundaries are now meaningless. According to him this is not true. They say this because open economies and societies serve their interests. We have to make our own choices. He observed that nationalism is the ideology which can show path to activists like us.

In this session, former Sah Prant Pracharak of Delhi Suresh Jain shared his experiences of JNU as Nagar Pracharak that how he started work of RSS in JNU campus in early 1980s. He said that it was really hard to talk about RSS in this campus at that time. There was a fear of violence from Left activists who were far greater in numbers. Suresh Jain said that he organized Path-Sanchlan of RK Puram District in JNU to show strength of RSS. This is how fear of Left activists got reduced in our swayamsewaks which were very few in numbers at that time.

On this occasion one of the senior most activists from ABVP in JNU, Umesh Upadhyay, who is presently Pro Vice Chancellor of a university in Raipur, talked about his experience as first lot of ABVP activists in campus. He said that there were only five activists initially in whole campus. He also shared his story of him being first candidate of ABVP in JNU elections and remembered contributions of other panel members on this occasion.

Dr. Sunil Mohanty also remembered his days in JNU and how he became an RSS Pracharak from a research scholar of JNU. He is the only RSS Pracharak JNU produced in all these years. He is now working in Arunachal Pradesh as Vibhag Pracharak. He told the story of Guru Dakshina karyakram of August, 2002 when Manniya Ashok Singhalji was chief guest and more than 250 students and teachers participated in Guru Dakshina karyakram. Prof. Aswini Mohapatra of JNU chaired the session. He said that we have been a strong force once in JNU and we should again strive for the same in near future that would be beneficial for JNU campus and the nation.

Advocate Sandeep Mahapatra, former President of JNU Students’ Union from ABVP moderated the session. He is the only elected Union President from ABVP in JNU. He shared his exciting moments of his electoral victory by margin of one vote. He said that it is time to contain Left activism in JNU as it is making inroads in other parts of Delhi. He cautioned about the emergence of urban Left movement which is getting its reinforcements from campuses like JNU and DU.

In the experience sharing session many former students of 1980s and 1990s and last decade revisited their student life in JNU and their experiences as RSS swayamsewaks and activists of ABVP. This session was coordinated by Sanjay Ganjoo, former organizing secretary of ABVP in JNU and Govind Mishra. Rashmi Singh, former General Secretary of JNUSU from ABVP presented a memento to Dattaji and Govind Chandra Mishra, former Vice-president presented memento to Raj Kumar Bhatia, former national president of ABVP.

Other prominent names which were present in the program were Kshetra Sanghchalak Bajranglal Guptaji, Senior RSS Leader Indresh Kumarji, Prant Prachark Anil Kantji, Senior Prachark Gopal Aryaji, R. BalaShankarji, Editor, Organiser, Prant Vidyarthi Pramukh Kamal Jeetji, Anil Vartakji from Vishwa Vibhag of RSS, Vibhag Prachark Siddharthanji and JNU Court member Dr. CP Thakurji. A memento was presented to all the alumni and dignitaries present in the program.
This program was organised by a team of former JNU students associated with working of ABVP and RSS under the banner JNU Cultural Nationalist Forum. The convener of the Forum is Advocate Sandeep Mahapatra. Ranjeet Kumar and Abhay Kumar are the Co-conveners and Swadesh Singh is the organizing secretary. The other core committee members of the forum are Dr. Atanu Mohapatra, Pinaki Routray, Dr. Pranav Kumar, Dr. Anand Kumar, Lalan Kumar, Saurabh Dubey and Devi Dayal.

KERALA: RSS workers built a bridge for a village.

Wed Mar 6 , 2013
Pathanamthitta (Kerala): It was a an age old desire for the village people of  Vallikode and Omalloor Panchayaths to have a bridge across the river AchanKovil, which has a great tradition related with Famous Sabarimala Pilgrimage rituals. There are two other bridges now already there in Kaipattoor and  Vazhamoodu,but it […] 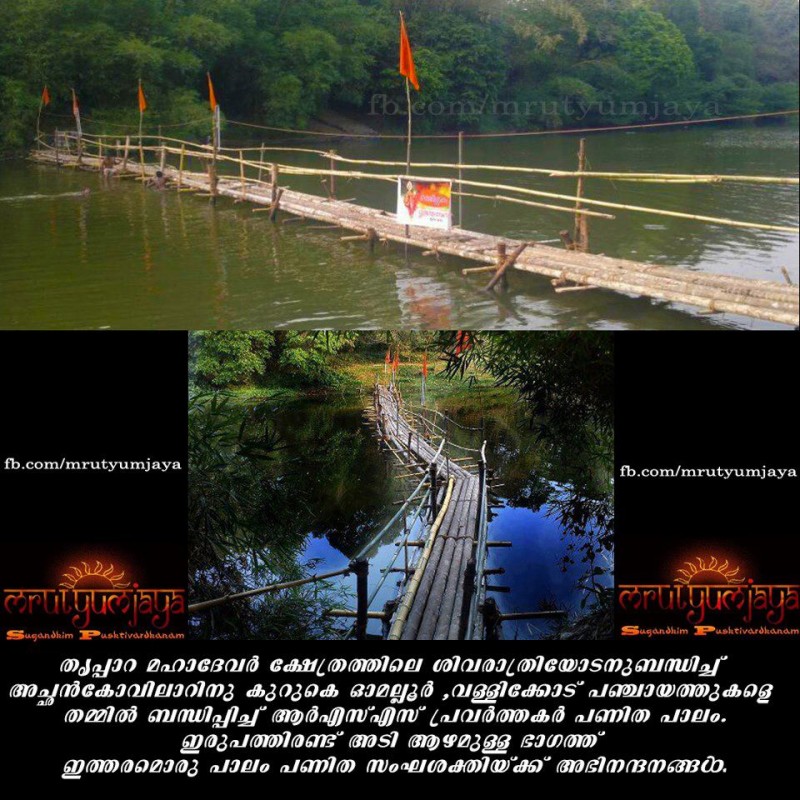