Bangalore August 25, 2013: Expressing his deep concern on reforms needed in education system across India, Goa Chief Minister Manohar Parikkar said ”Schooling system makes kids literate but not really educated. Today we get literate people but not educated people. Even legislations like RTE have been designed without much thought or impact. Unless we make people understand issues and go into depth of issues, education is useless. The information flow requires further tuning to make people wise. If we want the nation to come up we need reforms in the education system”

Goa Chief Minister Manohar Parikkar started his speech by giving an introduction to his humble  background. He recalled his work at a small scale unit and helping his father at his grocery shop. He questioned the leadership prevalent in the country today. Kind of leadership in the country today, like those of the unions, represent only a section and not all.

He also spoke on the lack of information among the people today. It’s the flow of information which lacks today he noted. Even though the sources of information has grown manifold, the flow of right information is lacking. For example not many people still understand the impact of 2G scam or the coal scam. Many are not aware of impact of the SC judgement’s. The spiralling inflation will only make the rupee touch 70 or more.

He then touched upon the lacunae in our schooling system. He said our schooling system makes kids literate but not really educated. Today we get literate people but not educated people. Even legislations like RTI have been designed without much thought or impact, Parikkar said. Unless we make people understand issues and go into depth of issues, education is useless. The information flow requires further tuning to make people wise. If we want the nation to come up we need reforms in the education system he said. Computer knowledge and handling will be a must in the coming 10 years. In Goa laptops were  given to students way back since 2002 to enable them to learn on their own he informed the audience.

Parikkar said education is the most important aspect in building India but most important  for our future is the need for  leaders with character. A word of a leader who has no character is useless he noted. He narrated a story which highlighted the importance of wealth but with good character. Like a filter that filters even muddy water, we need to filter leaders who govern us. He said it is the responsibility of thought leaders like you to choose such leaders with character. He said don’t go by individuals only but by the system he represents.

He ended his speech by highlighting the fact the we can build leaders by inculcating character and real education in our people.

The talk was followed by a interactive Q & A session. Following are a few questions he took.

Q: What measures have you taken in Goa to ensure quality education.

Manohar Parikkar (MP): Education system today can’t be changed overnight. The mindset of the teachers and parents have to be changed. Its a long process. We have started by isolating students from unwanted areas by focusing on content and educating them on specific subjects. We are also engaging teachers and trying to inspire and motivate them to adopt changes that are required.

Q:Higher education has been a turf of the leftists. Do you think it’s a hindrance in implementing the changes in our education system.

MP: A society that does not learn from it’s history is bound to suffer. History in the right perspective has to be introduced and distortion of history should be avoided without politicization.

MP:Urbanization is not all important but providing basic amenities to rural areas is a necessity. I don’t support complete urbanization at the cost of nature.

To a question on lack of  R&D in the country he said, the new government has to bring in policies to enhance investment and facility for R&D. To a question on gambling in Goa, he said though he personally do not support gambling, they can’t be shut down at one add it will impact the investor confidence. Hence we were slowly moving the casinos to areas that won’t affect the locals.

In the second session, Madhu Kishwar and her work in ‘Manushi’ was introduced to the audience.

Madhu Kishwar started her speech by talking about her experience in Gujarat during her study there. She quoted an example of ‘ram haat’ in Gujarat that aims at inculcating character in people. My study into poverty in last many decades made me believe that popular schemes will not alleviate people from poverty. Efforts must be made to alleviate conditions of our traditional artisans and worksmen. The unorganized sector of skilled people also needs attention. The colonial rule destroyed our traditional skills This is a civilizational tragedy she noted. One of the reasons for poverty in India today is that people in the government are working hard to keep people poor so that they can be doled out schemes for electoral dividends.

Many jatis which fought against the colonial rule were hounded and criminalized. This continues even today, she said. Many of the government policies has resulted in criminalizing traditional knowledge systems. Women are the worst affected due to such criminalizing. Infact the child welfare laws are leading children to poverty. She quoted the example of the ‘Nat’ community who were traditional acrobats, they were criminalized and forced to become beggars or adopt other professions like beedi making. It is the net result of state intervention that can be avoided.

The government’s instead of encouraging them to hone their skills to make it a profitable profession is destroying their livlihoods. Government’s war on street vendors is another case in example she said. She quoted many examples which have destroyed traditional livlihoods due to government’s policies and faulty court judgement’s. The argument of space shortage falls flat she rightly said as government is fine with huge parking complexes but neglects the livlihood needs of people thereby keeping their poverty alive.

Madhu Kishwar also quoted another example of cycle rickshaw pullers to highlight the faulty government policies that try to ban them. But in fact cycle rickshaw’s help everyone reach places at very affordable rates. The government in the name of beautification has criminalized them and tired to ban them. Bribery has increased due to this making their lives horrible.

She ended her speech by citing examples of successful campaigns by Manushi that restored livlihoods to the people who were affected by such government policies. We need to strive for a citizen friendly governance she said. We need income generation policies instead of populist schemes that help no one. The next government should focus on prosperity building measures she said as she concluded her speech.

Q: How to enforce order while retaining livlihoods?

Madhu Kishwar (MK): Honest enforcement of policies is the need of the hour. We also need to educate people and the traditional dwellers too.

MK: I am a critic of the present women’s reservation bill. Our critic and an alternate suggestion is available on our website www.manushi.in

MK: Rather than just legal measures,  we also need to encourage our traditional family systems. Values inculcated by families stay with people for life. Our women activists are engaging in destroying families instead of protecting them.

Q: How can each of us contribute to your cause individually.

MK : We can contribute by taking care of the poor in our neighborhoods. We need to see that they are not harassed by the govt. authorities unnecessarily.

Q: Do you think the role of NGOs is helping the cause or hampering it?

MK: NGOs funded by foreign institutions has caused huge damages to our nation. The donor agency driven agendas are proving to be a bane of Indian politics.

The next session was a movie on the work of Dr.Balasubramaniam and his organization Swami Vivekananda Youth Movement.. The short film showcased the work of SVYM among the trials and their work for their education and other needs like hospitals and schools.

Dr.Balasubramaniam delivered the presidential address as part of the concluding session. He appraised the audience about the importance of the 150th birth anniversary of Swami Vivekananda and how his personality can awaken us. He then made the audience aware that we are the youngest country and the capability we have to change things. He urged everyone to come out of our comfort zones and closed communities and work for the best people’s issues of clean water and toilets.

Indeginous people are not poor but we have a poverty of quality leadership, he said. We need to be clean in our thoughts, word and deed to understand Swami Vivekananda. We need patience to work in our country. We also need perseverance to work among our people, which even Swami Vivekananda used to say is required the most. Swami Vivekananda had said our nation cannot progress by revolution but by right evolution. He insisted that we need to first make ourselves ready and capable for working for the problems in our society.

Dr.Balasubramaniam said that being despondent or feeling small won’t help. He said we need to believe in Swami Vivekananda who said we need to start by readying ourselves . Bhauddik Seva, Adyatma Seva is the need of the hour as Swami said. Don’t try to imitate us but try to work yourself. Start with asking questions, not to others but to ourselves he said.

Dr.Balasubramaniam ended his talk by saying that we being the youngest nation we have a tremendous opportunity to alleviate the lives of the poor. We have less people dependent on us today, hence we can vow to share our excessive resources for the poor. It is then that we will be working on the words of Swami Vivekananda.

Radhakrishna Holla delivered the vote of thanks. A token of gratitude was given to the speakers.

A total of 506 select intellectuals from various professions participated in the seminar.

Report by Prashanth Vaidyaraj  and the Photos by: YANTRAKSHI for VSK-Karnataka 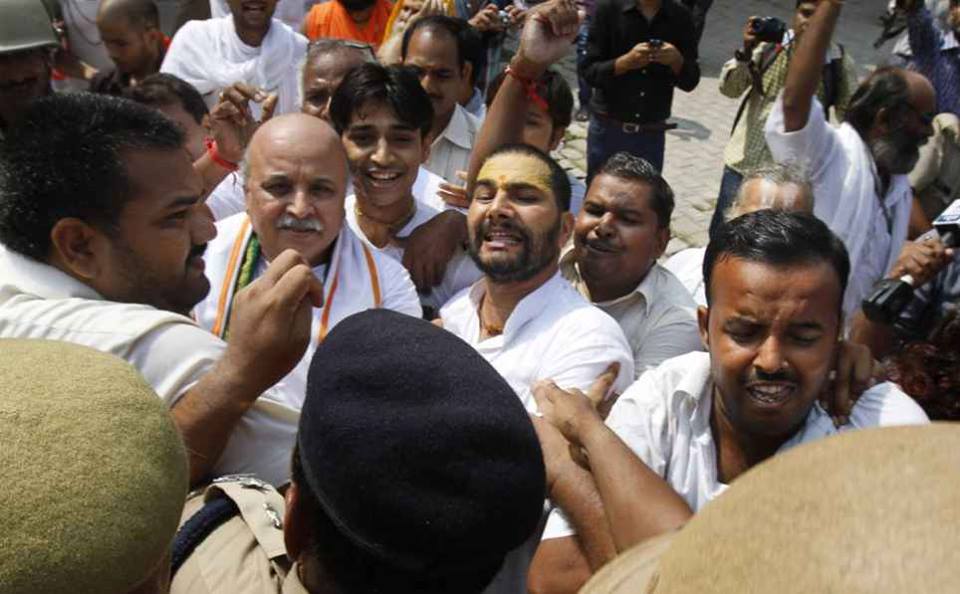