Central Govt released a list of 10 “RSS Terrorists”. Unfortunately for Congress, the list does NOT stand any scrutiny! Read my full analysis:

1) Begun in 1925, RSS is an 87 year old volunteer organization working towards nation building. It’s not something that just popped up yesterday.

3) RSS has 60,00,000 men and women in its two wings (Women’s wing is a separate organisation known as Rashtra Sevika Samiti, established in 1937). That’s more than 5 times the active strength of Indian army.

4) RSS runs over 50,000 Shakhas DAILY, across India. These are in open grounds and not some secretive camps. Anyone can go watch what they do in a shakha. Nothing is hidden.

Inference: His name involved in allegations, but was NOT convicted. Moreover, Joshi was gunned down in Dewas. So there’s no concrete evidence to take these allegations in court.

2) Devender Gupta – Arrested blaming him on Ajmer Blast. Not tried, not convicted.

3) Ramji Kalasangra – Blamed for Samjhauta blast. He is not even in any custody. So all allegations are just government words.

Inference: So just name involved. He’s not even arrested. So all just government’s version.

Inference: Just name involved and arrested. Not convicted. So all just government’s version.

Per govt, he worked with Vanvasi Kalyan Kendra in Andaman and Nicobar and Dang (Gujarat) from till 2007. Month not given.

Inference: He’s just arrested. So all just government’s version. Also, on 12 May 2011 Aseemanand claimed that his confessional statements were obtained by the National Investigation Agency (NIA) under pressure.

His real name was Jiten Chatterjee, a graduate in physics, he did his post-graduation from the University of Burdwan. His father Bibhutibhushan Sarkar was a freedom fighter. Might have been associated with Congress also when going to jail under British rule. So is the next blame going to be on all freedom fighter families that followed Gandhi, for one accused?

Inference: It is just the government’s disconnected version.

8, 9 and 10) Rajendra Chaudhary, Chandrashekhar Leve and Kamal Chauhan are mentioned, but no details released to scrutinize.

Overall, a DESPERATE attempt to malign RSS, a voluntary organization of 60,00,000 plus proud Indians, and crores of their strong supporters, by nit-picking 10 names, but not able to prove conclusively even ONE case.

Fri Jan 25 , 2013
THE STATEMENT ISSUED BY ALL INDIA PRACHAR PRAMUKH OF RSS Panvel, Mumbai- 25 January, 2013   The statement issued by the Union Home Secretary Shri R.K.Singh in support of a political speech of Union Home Minister Shri Susheel Kumar Shinde had contained several utterances about the RSS that were misleading, […] 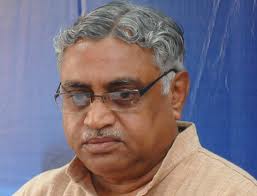