The 2-day Annual National conference of Sahakar Bharati, one of India’s premier social organizations in cooperative sector, was inaugurated in Bangalore by Shri Mohan Ji Bhagwat, Sarasanghachalak of Rashtriya Swayamsevak Sangh. Over 800 Mahila delegates are also attending the Conference. More than 1000 delegates from various Co-operatives of Karnataka are participating in the conference.

The main dais was named as “Laxmanrao Inamdar Vedika” after  Laxmanrao Inamdar who is the pioneer of the Sahakar Bharati movement. The theme of the conference was “Bina Sahakaar, Nahi Uddhar’ and ‘Co-operatives for National Renaissance’

Shri.Satish Marathe, President of Sahakar Bahrati spoke during the inaugural session. He said that this was the first National conference of Sahakar Bharati in Southern India. He opined that co-operatives should get operational freedom and level-playing field and they should work towards improving their economies. He said that they are also focusing on production on milk and reducing costs and make it affordable. He said affordable housing was the need of the hour. Housing sector financing is insufficient and ineffective. Financial inclusion not a reality yet for millions of Indians he said. He said that only 1700 urban banks are present, which is insufficient for our country. RBI has to alter its policy for creating new banks. He said we need to focus on depository insurance for Co-ops. Number of SHGs, joint-liability groups has to be increased in the country. He said, for financial inclusion of the populace, co-operative movement is the best. He stressed on the need for a center for co-operative research. He stated that everyone should oppose the Direct Tax Code (DTC) vehemently. Local skills and local economy will be obliterated if DTC comes into force he said.

A souvenir of Sahakar Bharati named “Sahakara Belaku” in English and Kannada was launched by all the dignitaries. A booklet Swami Vivekananda named “Sahkarita Yukt Swawlamban Ke Pranayta” was also launched on the occasion. Documentary CD and booklet on Karnataka Souhadhra co-operative federation, a unique organization in the country, was launched.

Shri. Deepak Kumar Barthakur, spoke on the occasion and mentioned the various achievements of the Samay co-operative bank. He said that the co-operative bank has 70 – 80 crore deposits and almost zero NPA’s.

Shri. Mohan Bhagwat Ji addressed more than 5000 delegates from all over the country, from over 1000 Co-operative institutions, during the inauguration.Chief Minister of Karnataka Shri Jagadish Shettar also graced the occasion.Below is an extract of his speech.

“I will keep forward those points that came to my mind after witnessing the activities here. We here are the karyakatras of Sahakar Bharati. We need to see what ‘Bharati’ is in this. Co-operative movements stated in the west by the likes of Robert Owen. But co-operation is not something to be taught to a man. Co-operation comes naturally to man. From the times of hunting together, to farming, man has co-operated with each other. Man is the strongest animal but also susceptible due to his selfishness. In the name of economy co-operation among humans falls apart. There is a certainkind of fear that keeps us co-operating with each other. It is the fear of the country falling apart if we do not co-operate with each other. People co-operate with others when in trouble. People also co-operate for selfish reasons so that their job is done. So what is the inspiration for SahakarBharati. In the Mahabaharata, every Pandavas and Draupadi too had selfish reasons in their life due to which they could not attain Swarg. Only Yudhistir was able to attain Swarg that too only after a scrutiny. Yudhistir attained Swarg only after he convinced that his life and work was for establishment of Dharma. There is no guarantee that there will be no troubles when we work in co-operative societies.

So we will not be able to work in Sahakar Bharati or for co-operative movement if we do not understand the purpose of the movement. We all need to think about it. Though co-operation is a word & concept that emerged in the west, our word is ‘Sahayog’ and ‘Sahakar’. Our understanding is that everyone who does good to all others will attain moksh and that is our Dharm and we should strive to make this a part of our life. This should inspire us to work for the welfare of all. After 1857 war, there was a debate on the contribution of the British. Everyone agreed that British brought many things into India. But Akbar Ilahabadi said that British brought postal system, railways, and industries but made Indians into workers who work for them for their entire life and finally take pension and retire. But our work should be for the establishment of Dharma as said in the Bhagavad Gita.

Our work should be to unite people and not to separate them. Everyone is a citizen of this nation. A Dalit, a Brahmin, and everyone else belong to this one nation. This should be our inspiration and this should also drive the co-operative movement. We work with sincerity and hard labor whether our work and name is commended or not. The ultimate aim of all our work is that we all attain the absolute freedom. It is only a human who can strive towards such kind of freedom. But this cannot be taken as a individuals freedom to do anything. It is the collective freedom that all humans have to achieve by being self-sufficient. This is possible only by co-operation. This is not an opportunistic alliance but a tool to achieve self-sufficiency and freedom for all. This is why we say ‘sanghachadvam, sanghvadadvam’, which conveys co-operation amongst all of us in this nation. Our work has to be with tan, mana and dhan.

There is a story of a man who gave the mantra of ‘moksh’ to the public, defying the order of his guru. But guru forgives him as he thought of sharing his knowledge for the welfare of all others and not just his. Similarly Swami Vivekananda took the teachings and knowledge of his guru to the world. It also needs to be kept in mind that our Bhakti, Shakti and Dhan too is directed for the right purposes, else it will not aid the society. The knowledge we have gained through the co-operative movement has to be utilized for the welfare of mankind itself. We should see that the last man in our society too is free and self-sufficient without being dependent on others. This is the aim of the co-operatives movement too. The society becomes stronger by this co-operative movement. Our Bharateeya society is one such unregistered co-operative movement that is based only on ethics. Deepak Barthakurji has shown that selfless co-operative movement can work in the most adverse of conditions. Just becoming an influential co-operative movement cannot be the aim of Sahakar Bharati but reaching out to each and every member of the society through personal contact should also be its aim.

The workers in the co-operatives should not have any personal ambitions other than working for the welfare of the society. Each co-operative should abide by law and also maintain blemish-less accounts. To make it a much stronger movement, each co-op should lead by example.Each worker of Sahakar Bharati has to vow that they will work towards involving each and every person on the society, even if the individuals work is recognized or not.

What I have spoken is from what I have witnessed from the work of the karyakartas of Sahakar Bharati. Please approve those words that you feel worthy and neglect those you find unworthy. But see to it that the selfless work of the co-operative movement continues unabated till the goal is reached.” said Bhagwat.

Shri.Ananth Kumar, MP spoke on the occasion and said that though the non-co-operation movement was started by MKG before independence, the Cong governments continued ‘non co-operation’ with the people after independence too. He said        PM claims to be an economist, the FM claims to be economist but the way they are trying to promote DTC, it looks like they are not economists. He said 30 lakh people of the country are dependent on 6 lakh co-operatives. But the govt. is bent upon including them in DTC and income tax ambit. Beyond this, they also want to bring in FDI in retail that will endanger the rural economies. He stated that we need to vow to protect this co-op movement and a ‘andolan’ has to start from this conference. He also cautioned that we should not politicize the co-operative movement but let it remain a nationalistic movement.

Shri. Jagadish Shettar, CM of Karnataka spoke on the occasion. He too said that Gandhi too gave lot of importance to the co-operative movement. He said Sahakar Bharati is doing a great job to keep the movement running successfully and we all need to support it. The Karnataka govt. has taken lot of measures to aid the farming community and milk co-operatives in the state. 36,000 co-operatives societies are operating in the state and 15 lakh people are employed by these co-ops. The state government has ear-marked Rs.3,600 crore and Rs.25,000 loan waiver was given to farmers due to drought condition in the state by the govt. ‘Yashashvi’ yojana has been instituted by the govt. to aid the workers of the co-op societies in insurance, health. He stated that the govt. has decided to institute a ‘revolving fund’ for the co-ops in the state. Shri. Ramesh Vaidya, co-convener of the National conference committee gave the Vote of thanks. Report by Prashanth Vaidyaraj and Vineetha Menon for www.samvada.org 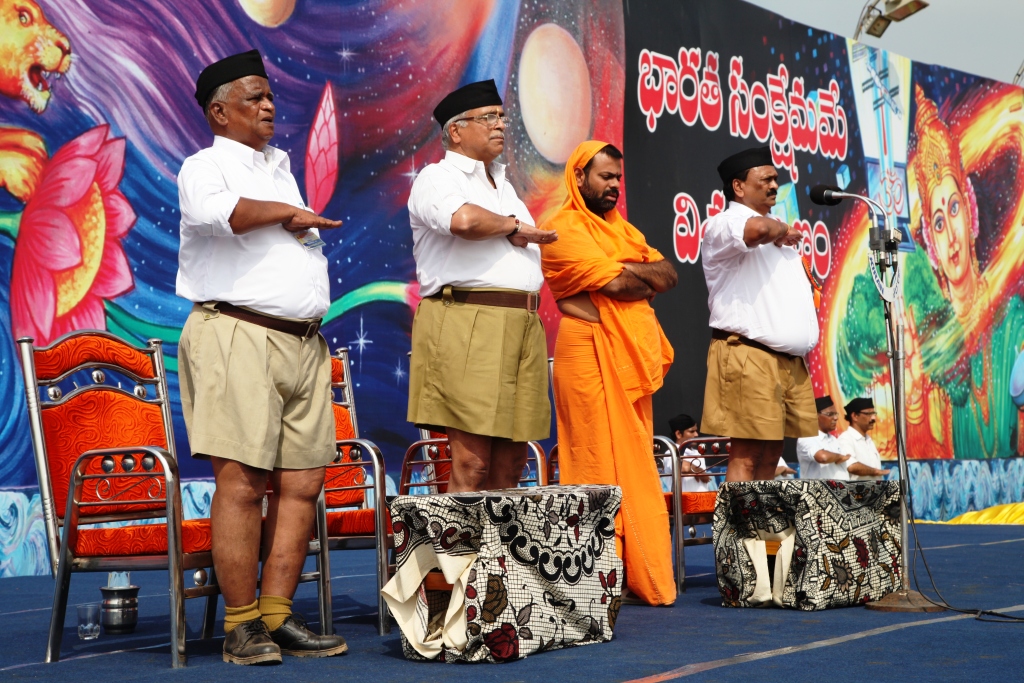