New Delhi, Feb 11, 2013: RSS Akhil Bharatiya Sah Sampark Pramukh Ram Madhav has expressed deep condolences to families of those devotees who perished at the Allahabad Railway Station Tragedy at on the occasion of Kumbh. Here is a small write-up on the issue by RAM MADHAV:

Tragedy at Kumbh is shocking. May the departed souls attain Moksha.
It is an uneasy feeling to know that people had to die in dozens just because of the callousness of some. This is not first time that such a big congregation is taking place in Prayag. The Kumbh last time was in 2001. There was a BJP Government led by Shri Rajnath Singh in power in UP at that time. Maximum precaution was taken to ensure that it passed off peacefully. It did.
This time round, what is more shocking is that such a major tragedy had occured and everybody is washing off his hands. The UP Chief Minister says that the Railways, not his administration, was responsible. Union Minister for Railways Shri PK Bansal says that his Ministry was not responsible because the station was overcrowded.
Then who is responsible for this terrible tragedy? Some tweeples demonstrated their utter insensitivity and senselessness by blaming the pilgrims as responsible as though they were all like lemming birds intent upon committing mass suicide. Some even declared that Kumbh is a big superstition and hence it should be banned.
Kumbh is world’s largest human congregation. It symbolises the unity of entire Bharat. Irrespective of its complex diversity if the country is united today, it is because of these religio-cultural events and symbols that are responsible for it. Those who think that Kumbh is a superstition and should be given up don’t understand real India. Giving up Kumbh means giving up lot more and ending up a collapsed nation.
All the states that Kumbh know that it attracts millions of devotees from all over the world. Many foreigners too visit this historic event. Also known to all states is the fact that on the ‘Mouni Amavasya’ day not less than 2 crore people turn up for holy dip. in fact, ensuring that too many people don’t congregate at one place leading to stampede is one of the important aspects of the planning of Kumbh that administrations make. It applies to railways stations, bus stands etc also. Closed circute cameras are set up all over the Kumbh city during the period and crowd movements are closely monitored. If the crowd is found too much at the railways station, the roads leading to it are immediately diverted so that more people don’t enter it until the existing crowd melts away.
From the description available so far from Prayag, no such crowd management was done properly resulting in too many people entering the station. State administration must accept responsibility for that. Once they are in the station the crowds apparently were ill-managed by the Railway Police. Facts are yet to come out, but this much is sure that those responsible for managing crowds at the station, the Railways staff, had miserably failed. Thus the Railways too can’t escape responsibility.
We are a country in which leaders like Lal Bahadur Sastry were born. Not shrugging the responsibility, but accepting it gracefully and ensuring that loopholes are plugged and guilty punished should be the attitude. In stead we seem to blame those who are dead for their own deaths, which is inhuman.
In fact the previous Kumbh at Haridwar in 2009 passed off peacefully and an estimated 10 crore people participated in it. It was fairly well-managed. The next is going to be the Simhastha Kumbh at Ujjain in 2016. It is time the administration learnt lessons and avoided such disasters. People come to such sacred occasions thinking they have governments to ensure their peaceful performance of religious rites. It is the duty of the governments to ensure that the believing Hindus feel secure in all their religious pilgrimages and festivals.

Mon Feb 11 , 2013
Prayag, February 11, 2013: On the tragic stampede at Prayag railway station that killed around 36 devotees & injured many, VHP International Working President Dr Pravin Togadia has expressed grief & said, “Devotees who lost their lives & limbs for no fault of theirs were Hindu. They came to Mahakumbh from […] 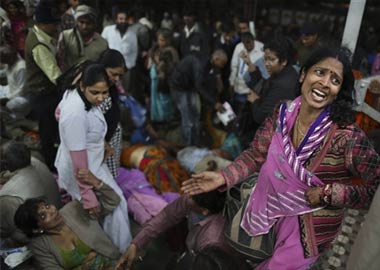