Addressing the audience he said, “We, Hindus think that our way is right and others ways are also right. Hence, we respect other religions as well. This is not the same as tolerance, tolerance means that one does not like or agree with someone. But, somehow can manage to co-exist. In this way of thinking the very fact of ‘dislike’ remains. That is not sustainable for a long time and not good for the harmonious living.”

He also said,“Unity in diversity (‘Avibhaktamvibhakteshu’) is the specialty of our country. Though we have so many languages, food habits, castes etc, we are still united. People in this country think that the whole country is ours, irrespective of the Governments ruling in the country. One does not hate other languages, regions and ways of living; rather respect each other.

We, Swayamsevaks of RSS have taken up the task of nation building. We have a dream of taking this country to pinnacle of glory. The work of making the men, who work for making this dream a reality, is happening through Sangh Shakhas. Swayamsevaks are running more than 1.5 lakhs service projects in the country. Each and every Swayamsevak, whatever small work he may be doing, thinks that he is worshipping Bharat Mata. That is the devotion that swayamsevaks have towards our mother land.”

He recollected Swami Vivekananda’s call to forget all Gods and worship only Bharat Mata for next 50 years. He opined confidently that when Hindus are organized, all evil forces in our country would be inactive on their own. Hence, he urged all Hindus to be united and create a strong Sajjan Shakti.

IT Milans are the weekly Shakhas of RSS for IT professionals. More than 80 Milans are conducted on Sundays in Bengaluru. IT Milans are also conducted in Bhagyanagar (Hyderabad), Pune, Mumbai, Delhi, Chennai, Kolkata, Bhopal, Karnavati (Ahmedabad), Kochi and many other cities. 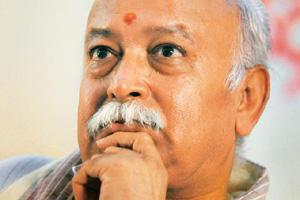