Bangalore: RSS IT Milans of Bengaluru, under the aegis of Vivekananda Kendra, set upon a huge task of taking  Vivekananda’s words of wisdom to the doorsteps of the citizens and kids of nearly 165 apartments in the ever-changing, cosmopolitan city Bangalore to commemorate Swami Vivekananda’s 150th birth year. 27th of January, 2013 was earmarked as the day that the program would be conducted simultaneously in all the apartments. It was conceived that the best way to take Swami Vivekananda’s words to the larger audience and also prepare the next generation in nation building as per his thoughts, was to arrange for an lecture on ‘Swami Vivekananda’s vision on National Regeneration’ which would be followed by a ‘Balabharathi’ session for kids in each apartment. Eminent personalities and senior executives from the IT and other fields were chosen to deliver the lecture on this all-important topic. The ‘Balabharathi’ session involves the re-introduction of cultural and patriotic fervor in kids through gameplay, storytelling from our epics, Bhajans, songs and Yoga. The ‘Balabharathi’ session was planned to be conducted for 4 consecutive weeks in the apartments with an idea of hand-holding the parents in such sessions, which they would take forward after the 4 weeks. This seemingly humongous task was accomplished with aplomb, owing to the months of planning that went into it and participation of hundreds of denizens of the city, including IT Milan Swayamsevaks. True to what Swami Vivekananda had told, “Men, men, these are wanted; everything else will be ready, but strong, vigorous, believing young men, sincere to the backbone, are wanted. A hundred such and the world will berevolutionized”, hundreds of Swayamsevaks spawned all over the city and approached the apartments for permission to conduct the program. The idea was well received and many came forward to help in the project. The next important task was to identify the speakers to talk on the topic. A team of RSS IT Milans was dedicated to this task and about 165 speakers who were senior executives in the IT field and eminent persons in other fields too were identified and approached. The speakers were senior professionals from companies like Infosys, Wipro, Philips, Nokia, IBM, etc., professors from IIMB, IISc and other premier institutes and eminent social workers. The identification and training of ‘Balabharathi’ trainers was a challenge too. It was here that many common citizens, residents of the apartments, friends and families of the Swayamsevaks were identified and several rounds of training in ‘Balabharathi’ session were given to them in various centers in the city. The role of coordinators at the apartments was paramount as they had to oversee the preparation and conduct of the program on the day in their assigned apartments and also take care of the needs of the speaker and the ‘Balabharathi’ trainers. More than 200 people, including many IT Milan Swayamsevaks were involved in the exercise as coordinators. Any amount of preparation without proper promotion or education about the program will deliver the project a dud. Hence a beautifully designed poster (pic above) on the program was displayed at several places in every apartment block and pamphlets with the details of the whole program were distributed to all the residents. Another important task of the Swayamsevaks was to go from door-to-door in the apartments and educate the residents about the importance of the program and request their participation along with their kids. Though the Swayamsevaks encountered few challenges in the process at a few places, they eventually won over the people and this was proved by the large participation of adults and kids in the lecture program and the ‘Balabharathi’ sessions. On 27th of January, the D-day had arrived. About 165 apartments were witness to this historical and unique exercise. The speech on ‘Swami Vivekananda’s vision on National Regeneration’ was well-received by the residents of the apartment. The lectures were true to the words of Swami Vivekananda, who said, “My ideal, indeed, can be put into a few words, and that is: to preach unto mankind their divinity and how to make it manifest in every movement of life”.

Shri.Rakesh, who attended the lecture, remarked that he came to know several unknown aspects of Swami Vivekananda’s life & teachings and its importance for kids too. Another parent, Smt.Latha, said that they were hoping that such lectures on Swami Vivekananda were conducted regularly in their apartments as they never had an opportunity like this before. More than 3900 people in about 165 apartments enthusiastically listened to the lecture. The next event following the lecture, the ‘Balabharathi’ session for kids was the cynosure of all in the apartments.Kids aged between 5 and 11 participated with all enthusiasm in the session. The kids of these apartments who never had an opportunity to play our traditional games or recite ‘slokas’ and Bhajans together, were seen participating enthusiastically in all the activities. One innovative game for the kids was to run in a circle keeping an eye on the trainer and when the trainer performs an action, everyone would stop and perform the action and not what he says. Another game was a team game, where the kids were divided into several teams. Each team had to hop towards the finishing line and return and pass the baton to the next kid in line. The team that finished first would be the winner. Anjali, a 7 year old, said, “I loved these games and I will get more of my friends the next time”. Children were heard impressing upon their parents to postpone their plans for shopping as it was time for ‘Balabharathi’ session. The kids then sat in a circle and chanted the ‘Shanti’ Mantra. The trainers then trained the kids in reciting various Slokas directed to instill a sense of service to mankind and reverence to the divine. Many kids had done these activities for the first time with other kids of their own apartment. Another activity that was a favorite among the kids was story-telling. One such story that was narrated by the trainers was the story of Dhruv, who is remembered by all for his strong determination. The kids were all ears and answered questions on the story enthusiastically. Many centers also had Yoga Asanas & Surya Namaskaara as part of the ‘Balabharathi’ session. But it was the song of the ‘Balabharathi’ session ‘Chandan hai is desh ki maati’, that caught the attention of the parents who expressed their pleasure at seeing their wards being involved in such noble exercise. They thanked the organizers for conducting the ‘Balabharathi’ sessions.Shri.Khanna, a parent said, “If the kids are regularly involved in such activities like ‘Balabharathi’ with many other kids, the man-making process as envisaged by Swami Vivekananda will surely fructify. Hence I thank the organizers immensely for facilitating this in our apartment”

The ‘Balabharati’ sessions were organized in 122 apartments and were able to reach out to nearly 1900 kids.

The event was no doubt well-received by the parents and people who listened to the lecture, but even the people involved in organizing the event too were very happy. Smt.Bijaya Bhattacharya, who was a ‘Balabharathi’ trainer said, “This provided me an opportunity to be part of this nation-building exercise and also involve the kids in a noble initiative. I thank the RSS IT Milans for identifying me for the cause”. Shri.Vishnukiran, senior manager at a prominent IT company in Bengaluru, was a speaker in one such apartment. He says, “This was a great opportunity to convey the words & life of Swami Vivekananda at the doorsteps of the residents of the apartments. For people like me who are his followers, this was a godsend opportunity to contribute in putting his vision into action.” Many who were the coordinators in the apartments evinced similar sentiments for being part of this huge initiative. Rama Reddy says, “Being a coordinator, I got an opportunity to witness the making of a new India by involving both adults and kids alike. I had never seen anything like this before” he stresses.

This whole exercise shows that a well-intentioned and well planned initiative in nation building is not only received with great warmth and intensity by one and all but they are also ready to be part it. Vivekananda Kendra, which is spear-heading the 150th year celebrations all over the country, provided the ideological backing for this exercise. The mission of the Vivekananda Kendra says, “Service with spiritual orientation results in man-making which invariably and inseparably is connected with nation building.”It is such initiatives involving people from all backgrounds that contribute to nation-building and prepares the new generation to take up challenges. This can only happen if a sense of pride in the past and a vision of the future are instilled in them. “The individuals being raised, the nation and its institutions are bound to rise” said Swami Vivekananda and this programme initiated by the RSS IT Milans of Bengaluru on the occasion of his 150th birth anniversary is a hallmark of these words of wisdom of the ‘Veera Sanyasi’.

Pls not: Readers are requested to read the book “National Regeneration: The vision of Swami Vivekananda and the Mission of the Rashtriya Swayamsevak Sangh (RSS)”, compiled and edited by Shri.Suryanarayana Rao, to know more about the inspiration and impetus behind this initiative.

By Prashant Vaidyaraj for VSK-Karnataka.

'I have no Official Information about the So Called Case Against Me', says Dr Togadia from Prayag Kumbhmela

Fri Feb 8 , 2013
by Dr Pravin Togadia, VHP International President Prayag, February 8, 2013: Since past 36 hours, exactly from the day before the grand Saints & VHP Dharma Samsad at Mahakumbh on February 6 & 7, where over 10000 Saints along with the RashtreeyA Swayamsevak Sangh Sarsanghchaalak ji Ma. Shri Mohanji Bhagwat & […] 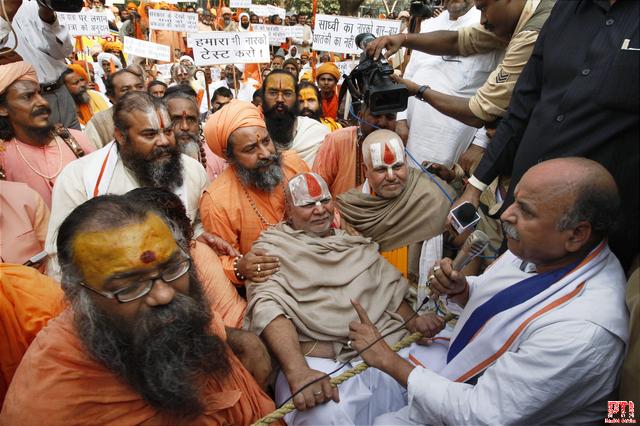