Washington: The RSS has taken strong objection to the move by an Indian-American, who claims to be a staunch supporter of Narendra Modi, for dragging the name of its chief Mohan Bhagwat and other leaders in an event held in Washington. “RSS has taken strong objection to Shalli Kumar using the name and picture of its Chief in unauthorised manner,” RSS senior functionary Ram Madhav said on Tuesday. His comments came after it was brought to the notice of the Rashtriya Swyamsevak Sangha (RSS) that Chicago-based businessman Kumar had printed the name and pictures of Bhagwat as an invitee to ‘Bharat Divas’ held in Washington DC.

Ram  Madhav said the view of the RSS has been strongly communicated to Mr Kumar, who at the function claimed himself as an ardent supporter of BJP’s prime ministerial candidate. The meeting was attended by nearly 300 Indian-Americans, mostly from New York, New Jersey area and those from in and around Chicago in Illinois. The meeting was also addressed by the BJP MP from Chitradurga in Karnataka, Janardhana Swamy. 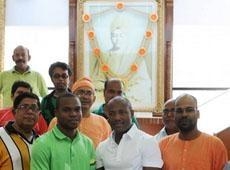