Rashtriya Swayamsevak Sangh is of the opinion that the country should not open its doors to FDI in the retail sector.

As a follow up to the Vijayadashmi address by RSS Sarsanghchalak, Dr.Mohan Bhagwat, a discussion was organised at Delhi with some of the intellectuals and opinion makers. During the Q&A session, Dr. Bhagwat gave the RSS perspective on a number of key issues. This sort of program after the Vijayadashmi address has been organised for the 2nd year in succession at Delhi. He stated that it has always been Sangh’s view that we should be open to get critical knowledge and  technologies from other countries, albeit on our terms.

Dr.Bhagwat asked ” Why do we need to give foreign companies permission to sell soap, oil and vegetables at the cost of destroying our retailers. ” He said that Sangh’s has always emphasised on Swadeshi to strengthen our independence and promote Ahimsa. He mentioned that the true Independence of a human being is in being self-reliant. To have a proper control on human needs, it is important to develop a nature of “Ahimsa”. Dr.Bhagwat also added that the country needed a balanced and wise economic policy. The policies must empower the common citizen to have the basic capability to provide for food, clothing, housing, health , and the ability to be able to take care of guests at home honourably. They should not be lead to a situation where they are forced to commit suicide for lack of basic requirements. At the same time, we must ensure that proper measures are taken to ensure that our forex reserves are adequate.

Answering questions related to our neighbouring countries, esp Pakistan, he added that we would need to design a strategy by which Pakistan would not dare to even make a covert attack on Bharat. In order to achieve such a situation, we must make efforts to defeat Pakistan at the diplomatic level so that it fears that by attacking Bharat, they would be antagonizing all other countries. He said that it is not right that Pakistan continues to attack us and we continue to only offer talks. We must be fearless and appropriate steps must be initiated. He supported the nuclear power initiative and indicated that Bharat, like China needs to give evidence of its power of being able to keep its neighbouring countries under check.

Dr.Bhagwat was confident that inspite of varied ideologies, people from all sections of society can come together and work for the welfare of our country. He clarified that Sangh doesn’t latch on to a particular dogma and is interested in the pursuit of the truth. Values that are important and are to be nurtured are being given up and the harmful ideas are being pursued due to ego and selfishness. This needs to be corrected.

One of the journalist asked if Sangh’s impact and acceptability is reducing. To that, Dr.Bhagwat informed that it was in fact the other way around. To another question where it was asked if “nationalism” had become redundant in a global environment, he replied that other countries are only chanting the slogan of globalization but were in fact keen on developing their own nations. Sarsanghchalak also informed that as of now, Sangh has not found the need to change its core ideology and perspective. However, if we find that we need to make a change in our perspective, we would not hesitate to change it. “We don’t believe in any “isms”, we believe only in the Truth” , he said. He also mentioned that Sangh work is growing continuously. The number of shakas and the attendance of swayamsevaks in shakas is also growing.

Sarsanghchalak emphasised on the need for “Value Based Education” and “Education free of business interests “. We need to keep those foreign universities which are only interested in making profits of millions of dollars. In order to develop human beings with character, he emphasised the need to revamp the education system. It is the teacher who can set an example by his or her own life. However, since the teacher is also a product of the same education system, the teacher also needs training in value based education. Instead of the pursuit of wealth, fame and authority, the teacher must stand as an example in helping others and involve in development activities in society. To ensure that the seeds of this attitude are developed from home, Sangh has started the “Kutumb Prabodhan” ( work of inspiring families ) . He said that it is not possible to correct in a short time, the fall of some core values which have been falling for a long period. However, he expressed confidence that the situation is not that grim that it cannot be corrected. He said we need to create a sense of love and responsibility towards our ” Waters, Forests, Land, Animals and Culture”.  He said that the next 25 years are critical years to develop the nation of our dreams. Sangh is investing time and energy in developing individuals who will rise above selfishness and differences along with the ability to fulfill their duty inspite of any odds and obstacles.

Dr.Bhagwat expressed the need to have laws which are common to the entire society. In another context he mentioned that in the true sense of race and numbers, there is no minority in our country and the “minorityism” in our country is a result of wrong policies of appeasement and vote-bank politics in our country.

Answering a question regarding the state of affairs of women in our country, Dr.Bhagwat said that Sangh was in total support of empowerment of women. He said, ” The Bharaitya view of women is truly scientific and towards the welfare of entire humanity.Between man and women, none is higher or lower. In the welfare of family and the nation, both have to contribute equally”. He gave reference to his Vijayadashmi address wherein he had laid the importance to the need of women being strong, aware and intellectually sound. We must create an atmosphere where in the women are motivated and also get the independence to contribute their mite. He laid the importance of education to be provided to girls free of cost. He said ” There are only a few things that a woman may not be able to do based on nature’s construct.  In fact, my opinion is that in comparison to the few works that the woman may not be able to do, there are far more works that only a women can do which a man cannot do. Therefore there should not be any hinderances and obstacles in their way. 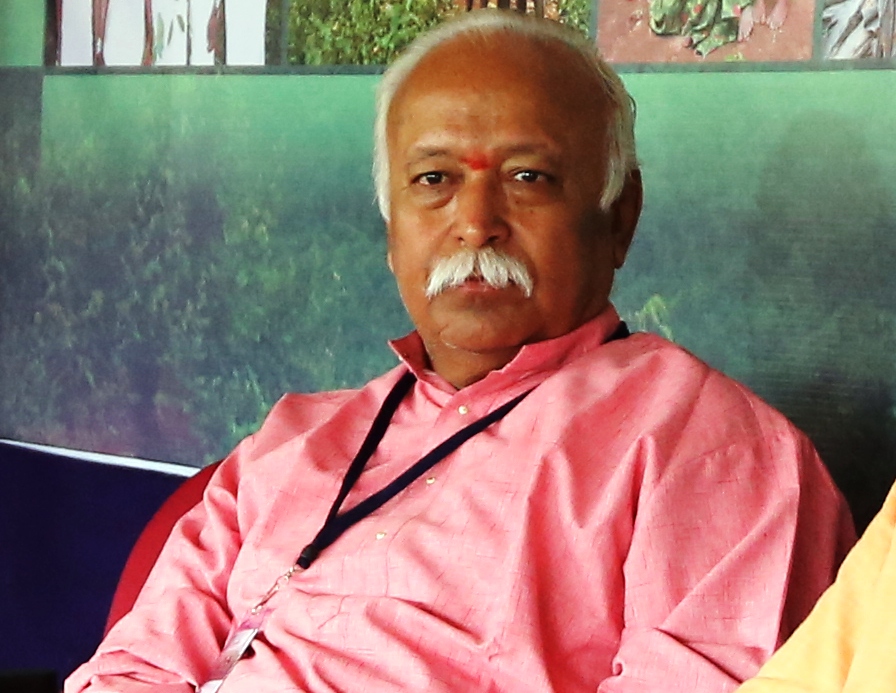