Sri Krishnagopalji after taking the whole stock of the first phase of service had appealed to the countrymen in general and sangha workers in particular to collect all details about the pilgrims stranded in the flood hit area as early as possible. sangha swayamsevaks who reached the land zero just after the calamity had joined hands with Army-men in the service activities. 12 centers were started and the work is going on continuously day and night. Now, ‘Daivi Apada Sahayatha Samithi’ service forum floated for the well planned service activities is now stepping towards the second phase of relief activities.
1. Extending the service centers in more places.
2. The depth and extend of the calamities has not been surveyed yet. This has to be done. Batches were formed to take the actual details. It is a must To start the proper rehabilitation activities properly.
3. Till now preference was given to the pilgrims. But the local peoples were hit the most. For that matter a large cordon of workers are going to the higher as well as the interior parts of the terrain.
4. As stated earlier many are stranded in the area. They are to be found out.
5. Worst ever natural calamity had other after effects. The main problem would be the mental trauma through which the survivors underwent. Counseling in a big way should also be started.
Swayamsevaks including experts Ina very big number to accomplish these tasks with in no time are stepping ahead.
Think, had we sent our contribution for the SEVA work to the A/C number given earlier, if not do it fast..
Account number 31156574681
IFS code SBI N0000630

Sun Jun 30 , 2013
Bangalore/Mysore June 30: “”The imbroglio and crisis in Jammu and Kashmir is not just related to a state. We need to understand it clearly as ‘It is a national issue of separatism and terrorism in a state of India’.  The problem of Jammu and Kashmir is maintained and nurtured in […] 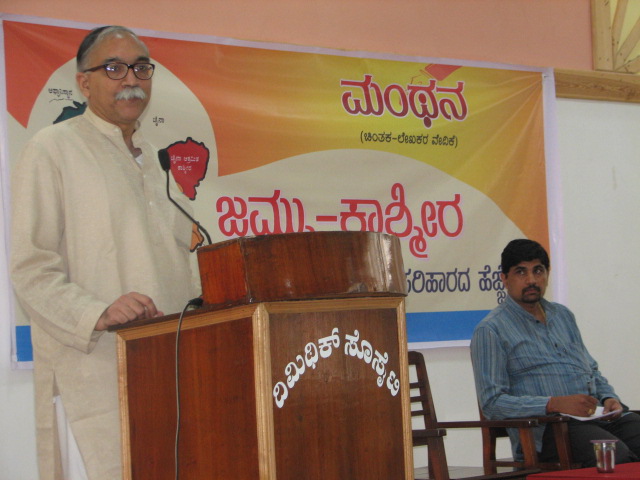