Kannur Dec 2: Vinod Kumar, a RSS swayamsevak and BJP activist was brutally murdered in Payyannur of Kannur in Kerala. Vinod, Payyanur Shakha karyavah succumbed to death at Pariyaram medical college on Sunday evening and many have seriously injured.

Years ago, on December 1, 1999 RSS leader Jayakrishnan Master who was a school teacher was murdered in front his students when he was taking classes. It was a shocking incident in entire South India.

BJP has called a dawn-to-dusk hartal in Kannur district on Monday to protest the attack on party activists.

On 1st December 1999 at around 10.35am, the class teacher of Mokeri East U.P. School in Koothuparambu near Panur in Kannur district and vice- president of Bharatiya Janata Yuva Morcha Kerala State K.T. Jayakrishnan was conducting class for his 6th standard students. Suddenly, his bodyguard (provided by the state government to protect his life due to threats from communist criminals) disappeared and seven CPM activists entered the class room, shouted slogans and warned the students not to move, blocked the class room’s entrance, took sword-sticks and razors in their hands, came near Jayakrishnan Master and stabbed him several times. Jayakrishnan Master fell on the floor, but the heartless communist criminals did not stop and continued to stab him. After more than 48 ante-mortem injuries all over the body, Jayakrishnan Master breathed his last within five minutes.

After confirming his death, a CPM man wrote a warning to the witnesses — children and other teachers — on the blackboard that if anyone gave evidence to the police or the court, they would be killed. They left the place in procession, walking along the public road brandishing the blood-stained weapons as if they were celebrating a victory. The most horrible murder was committed in front of students less than 11 years old. The young children were shocked as their most respected class teacher was brutally murdered in front of them. The incident created psychological problems for many children who had to undergo counseling.

K.T Jayakrishnan Master was a most respected person among the local people. He was a very soft spoken person loved by all. There were massive crowds to listen his speeches anywhere in Kerala, specially in Kannur district. He was not in the habit of insulting or ridiculing his political opponents. The CPM murdered Jayakrishnan Master only because of the growing popularity of the deceased and the fact that he was propagating an ideology (Hindutva) which they could not tolerate.
The CPM goons did not even considered the mental trauma that the children would have to suffer on seeing such a terrible murder in front of their eyes. The brutal murder left an indelible scar on the minds of the students who witnessed it and this could affect their personality development. Many have joined other schools. Most of the students had to undergo counseling.

More than 400 dedicated Hindu activists have been killed by CPM goons in Kerala and West Bangal during the past several years. Mon Dec 2 , 2013
Bangalore Dec 2: It was a memorable and inspiring Sunday for the students of TAPAS, when they had an interaction with Magsaysay awardee Dr Harish Hande at Rahtrotthana Parishat at Bangalore on Sunday morning. Tapas is a nation-building initiative in the field of education by Rashtrotthana Parishat. It will focus […] 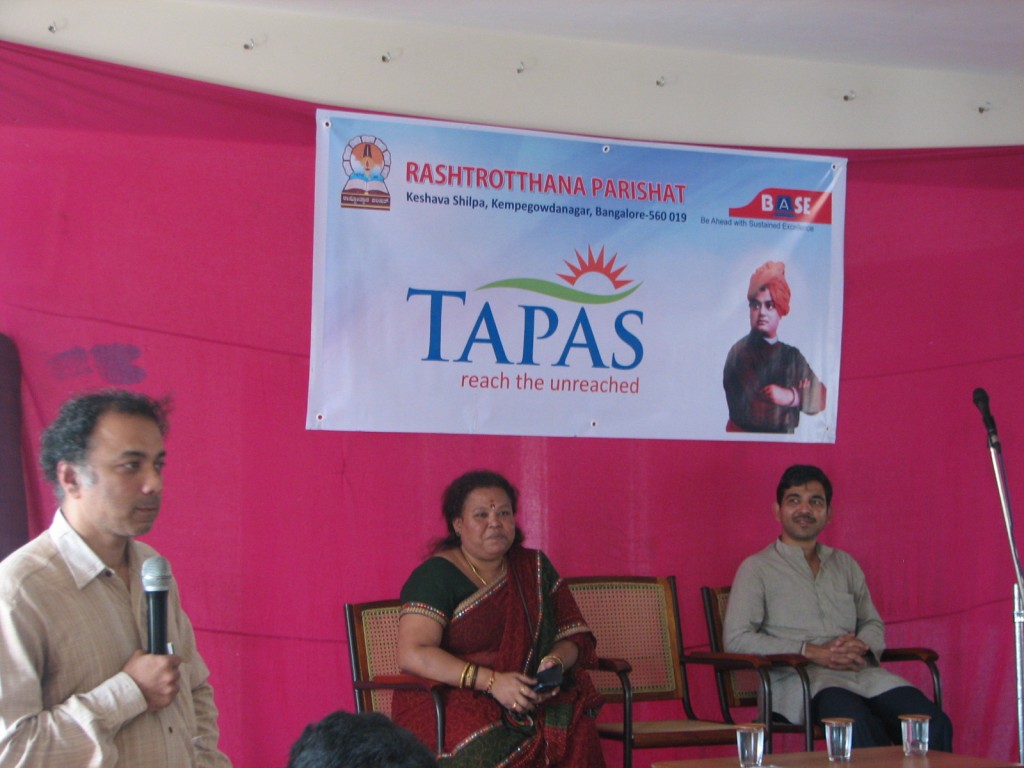