Report by Ravindra Saini in Dehradun  (In Organiser)

Uttrakhand July 29: Uttaranchal Daivi Aapda Peedit Sahayata Samiti has chalked out a two-phased rehabilitation programme for the victims of Uttarakhand calamity. The strategy was formulated at a two-day meeting held in Dehradun from July 18 to 19. RSS Sarakaryavah Suresh Bhaiyaji Joshi attended this meeting.

Under first phase of the programme, it has been decided to start immediately two medical centres in Kedarghat area, the most affected part of Uttarakhand with primary level of medical facilities. Besides priority would be given to the education of the children and students from primary level to higher education including their boarding and lodging at different centres in Uttarakhand and, if needed, in Uttar Pradesh too, subject to the permission of the family head.

The orphan children, either boys or girls, would also be taken care of and the organisation will take all steps for their upbringing. An appropriate monetary help may also be rendered to those who need for the marriage of their marriageable girls, particularly and also for repair of houses and for promoting their business too.

The families without male earning member, till their settlement, would be provided at least ration regularly. Keeping in view the future devastation, which may occur in coming days of peak rainy season, the stocks of rations and other daily needs will be stored at different places in the hilly probable affected areas so that immediately relief maybe provided in case of sudden eventuality.

The construction of houses, religious places, educational institutions and commercial complexes will be undertaken in the second phase after September when the rainy season ends and the conveyance and transportation facilities are restored. A steering committee, comprising of all the participating organisations representative and RSS activists have been formed with 15 members who will further undertake the rehabilitation programme under the convenorship of Shri Sunil Kumar, Sahprant Seva Pramukh.

Earlier on July 18, the group leaders of the survey teams sent by Samiti in all 29 affected blocks of Uttarakhand met and presented the detail reports area wise. All types of data viz no. of houses collapsed totally and partially, no. of death, no. of orphan children, no. of family without male guardian, etc. All the data was discussed in the meeting. On July 19 again the meeting was held in which the representative of all the organisations participating in the relief operation including RSS, BJP, VHP, ABVP, Sevika Samiti, Bharat Vikas Parishad, Uttaranchal Utthan Parishad and Vidya Bharati took part.

Shri Bhaiyaji Joshi also conducted an aeriel survey of the Kedarnath, Gangotri and Goucher. He was accompanied by Kshetra Pracharak Shri Shivprakash and former Chief Minister of Uttarakhand Shri Ramesh Pokhriyal ‘Nisank’. During his visit, Shri Bhaiyaji also met Chief Minister of Uttarakhand Shri Vijay Bahuguna to discuss the rehabilitation of the victims.

Special dua by Muslim Rashtriya Manch for people of Uttarakhand

Muslim Rashtriya Manch organised a special dua programme in New Delhi on July 24 to pay tribute to those killed in Uttarakhand tragedy and also those who are facing problems due to the devastation. Apart from the senior leaders of the Manch, RSS national executive member Shri Indresh Kumar also attended the event. Jamait Ulema-e-Hind president Maulana Suhaib Uz Zafar Qasmi and president of Residents Welfare Association, Ahata Harijan and Gali Mir Madan Mohammand Zafar were also present on the occasion. The activist of the Manch stood with the people of Uttarakhand during the calamity and provided monetary help for relief and rescue operations. The monetary help was dispatched from Ujjain, Indore, Jaipur, Jabalpur, Raipur, Ranchi, Lucknow, Agra, Delhi, etc.

A RSS delegation under the leadership of Sarkaryavah Shri Bhaiyaji Joshi called on the Uttarakhand Chief Minister Shri Vijay Bhaguna on July 18. During the meeting Shri Joshi apprised the Chief Minister of the relief work done by the RSS swayamsevaks under the banner of Uttaranchal Daivi Aapda Peedit Sahayata Samiti since the time and date the disaster occurred. Thousands of pilgrims were rescued and helped, 21 relief centres operated at all the affected places, 136 truck loaded with 300 tones of grain, eatables, mineral water, blankets, tripal cloth and various items of daily needs were sent to the affected places.

The Chief Minister responded very positively and appreciated the work done by the RSS without seeking publicity. He recognised the character of the RSS during such natural calamities and expressed his gratitude. Chief Minister also arranged a helicopter to Sarkaryavah for an aeriel survey of flood affected area of Kedarnath, Gangotri, etc. The CM also assured the delegation that all help will be given to the NGOs, including the RSS and invited suggestions from time to time for normalisation of the situation.

“Uttarakhand disaster is a national disaster. Therefore the whole nation is aggrieved and help in cash or kind is pouring in large scale from every corner of the country,” said RSS Sarkaryavah Shri Bhaiyaji Joshi while talking to media persons in Dehradun on July 19.

Shri Joshi paid tribute to the victims of devastation and also paid heartiest thanks to the army personnel and their officers, ITBP and NDRF men for their exemplary contribution in the very tedious rescue operations. He also appreciated the role of different voluntary organisations, which participated or are participating in the relief operations.

Replying to a question regarding the role of State Government, Shri Joshi said it is not the appropriate time to evaluate the Government’s performance, but it is time for all of us to think as to how to come out of this disaster. He reminded that rehabilitation work is very complicated and tedious job which can be tackled by the joint efforts of all—the government as well as various agencies including the NGOs.

The Sarkaryavah assured on behalf of the RSS and all the organisations associated with it, to participate in the rehabilitation of the victims in respect of education, employment, trade, shelter and upbringing of the dependant families and orphans. Besides this, he stressed the need to boost up the moral of the local people and generate confidence among them. He hoped that very soon worship at Kedarnath will be started, Charo Dham Yatra will begin as usual and the self-confidence of the pilgrims and tourist will be restored. He urged the Uttarakhand Government to initiate action on top most priority basis to clear the blockade of road and conveyance with assurance to government on behalf of the RSS to render assistance in all respect. 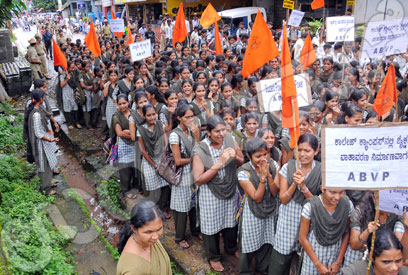