Rajasekhar Kuppa, An IT Milan karyakartha narrates his experience. Kanyakumari: Recently 25 swayamsevaks of various IT milans in Chennai returned from a “spiritually enriching” trip to Kanyakumari. It all started when one of our swayamsevaks shared the heroic story of “Lakshman ji – A Forgotten Hero” in our weekly milan and that spurred everyone to embark on this trip to Kanyakumari. After few rounds of moving around the trip dates to accommodate everyone we finalized to Feb 22 – 24. After lunch as planned we all wore our Ganavesh and left to the beach to take a ferry to the Rock Memorial. Our fellow passengers were curious about all of us in Ganavesh and a couple of German tourists came to us and asked us who we are and if we belonged to any particular organization. We briefed them about RSS and its noble mission, they were all ears and wished us the best in our endeavor.

We all got on to the ferry and as soon as the ferry left for the Rock Memorial slogans like “Bharat Mata ki Jai” filled the air. As we were sailing through the turbulent ocean it made me think of the turbulence in the mind of Swami Vivekananda which prompted him to swim in such treacherous conditions to the rock and meditate upon Bharat Mata which fell from its pinnacle of glory and her beloved kids who were once the thought leaders of the world, now living in abject moral and monetary poverty.

With all these thoughts we reached the rock and went around visiting the Sri Pada Mandapam and the Vivekananda Mandapam. Then we assembled on the rock facing mainland Bharat and sung our RSS prarthana. By that time many people flocked around us in curiosity. Some tourists came and introduced themselves to us saying that they want to join RSS and some said that they used to attend shakha in their childhood.

Overall it was a very positive response which epitomizes the respect society has towards sangha and it’s swayamsevaks no matter how much vested interests try to malign us. We sat around and sung patriotic songs for a while and returned back to the mainland. The next day we went around few temples nearby and then met Sri Lakshman ji who was living in the Vivekananda Kendra. He narrated to us his role in reclaiming the rock from the Christian Missionaries who were trying to occupy it. It was an awe-inspiring story which brought tears in my eyes. We could feel the numbness that paralyzed the huge mob with weapons upon seeing the “roudra” in Lakshman ji and his friends. It is just because of such countless sacrifices of thousands of people like Lakshman ji we are still able to maintain our identity in this sacred land of ours even after repeated savage attacks on us in last thousand years.

Meeting Lakshman ji was the perfect ending to our trip and we all returned home with a sense of commitment to positively contribute to this great Motherland of ours.

Mon Mar 11 , 2013
Bangalore: On the occasion of Swami Vivekananda’s 150th Birth Anniversary, there was a Blood Donation northwest pharmacy Camp that was held at Gopalan Engineering College, Hoodi Village, Sonnenahalli, K.R. Puram, Whitefield, Bangalore. The college management, NSS and ABVP Students initiated this program which turned out to be a grand success. […] 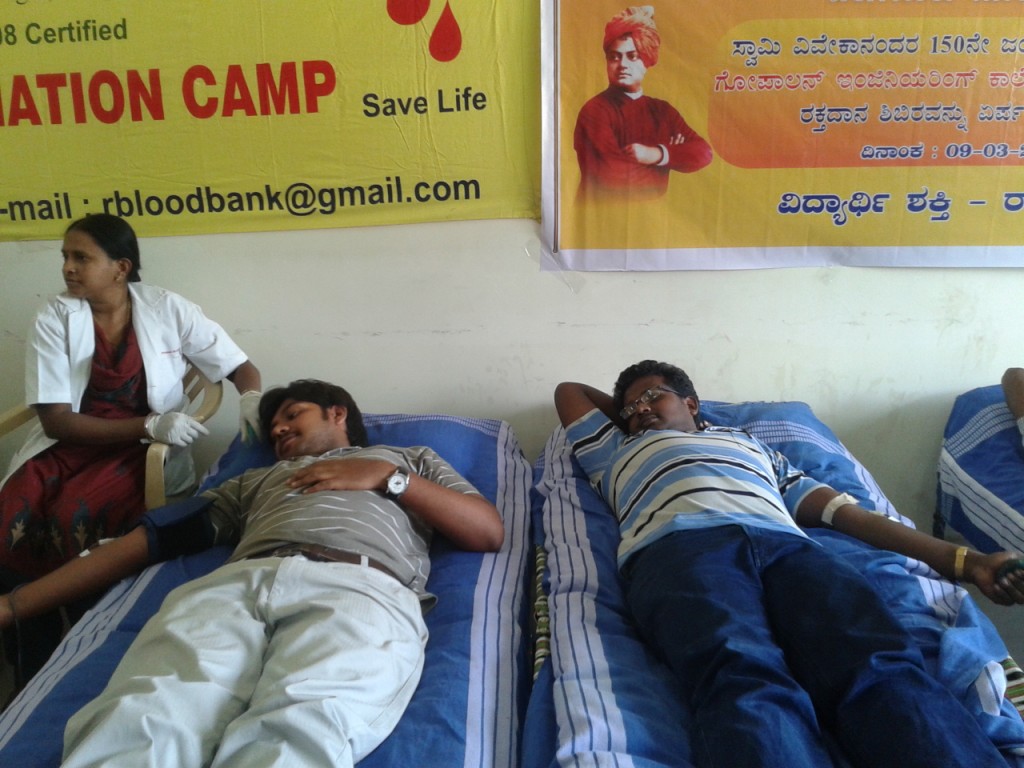