Jammu, Sept, 29:  During his visit to Jammu, RSS Chief Dr.  Mohan Rao Bhagwat touched upon various issues concerning present overall political situation in general and the social and political scenario of Jammu and Kashmir in particular in his address at Parade Ground, Jammu. While eloquently touching upon the great legacy and culture of complex diversities that make this land a myriad land of cultural confluences, he said, it is incumbent upon all of us to safeguard and preserve such tradition.  This is unique to Indian ethos and values, the RSS Chief said.

Insinuating the statement made by J&K Chief Minister Omar Abdullah with the European delegation wherein he purportedly said that the accession of Jammu and Kashmir with the Union of India was not final and that some conditions needed to be fulfilled on part of India, Dr. Bhagwat sought to remind him that the accession of J & K to the rest of India is not just by the “document of accession”. He reiterated that Kashmir has always been ours since times immemorial.  He referred to the glorious reigns of Hindu King Lalitaditya and those of the rulers before him.  This accession, said RSS Chief, was irreversible and irrevocable for all times to come.

Dr. Bhagwat also referred to Hiranagar terror attack and the Kishtwar happenings.  While paying profound tributes to the martyred Army Jawans, the slain policemen and the innocent citizens that died in the dastardly terror attack at Hiranagar and Samba, Dr. Bhagwat maintained that it is not just the responsibility of Army to safeguards our borders and defend our land from aggression but such duty lies equally with civilians . He said that we all have an equal stake and need to participate and contribute in our own little but significant ways to ensure that no harm befalls our motherland.  Till the time we are alert and united no harm can reach us.   We cannot depend just on government agencies for our security and defense and forget our own responsibilities, emphasized RSS chief.  Though Army Jawans have made supreme sacrifices and we, as a nation, are indebted to them, the need to be vigilant for us common citizens can never be overemphasized.   This becomes even more necessary when we speak of a troubled state such as Jammu and Kashmir, in which there has been exploitation and gross discrimination against people of Jammu region.

Mentioning the recent happenings at Kishtwar, Dr. Bhagwat said that it was a design by the political forces operating within the system to displace Hindus from their land and usher in their idea of unhindered anti-national polity.  This, he said, could be countered only by being ever vigilant and united.

Dr. Mohan Bhagwat sought to dispel the air of despondency by emphasizing upon the great legacy and culture that is bequeathed to us by our great ancestors.  There were times far worse than the present ones, but we have always prevailed.  It was the time that we repaid our debt to our Motherland by forging unity and fraternity within our ranks.  Dr. Bhagwat also said that the present fissures and divisions that plague our society is a culture alien to us.  It is a foreign infliction that we need to get rid of.   Hindus are, by their very nature and their timeless civilization, liberal and large hearted.   RSS Chief repeatedly invoked reference to Hindu ancestry and laid great stress upon to carry on that legacy and tradition further.

The goal of RSS is to inculcate and imbibe a sense of organizational spirit within an individual so he becomes part of one big family that is Bharat Mata.  In this context, RSS Chief recalled a saying of Rabindra Nath Tagore made during Bengal partition in which Tagore had said that the only path to Indian unity is the Hindu way of life.  This goal, maintained Dr. Bhagwat, could not be achieved as long as we remained divided and not bonded in brotherhood.  He also laid importance upon the need for selfless people and people with impeccable integrity and character to take upon the mantle of leadership at micro level so others could look towards them for guidance and inspiration.

2 thoughts on “'Strengthen the confidence of Security forces': RSS Chief Bhagwat at SANGH SANGAM in Jammu”

Mon Sep 30 , 2013
With his experience of Bharat Parikrama Yatra across villages of Rajasthan, RSS former functionary Sitarama Kedilaya wrote a letter to Rajasthan Chief Minister Ashok Gehlot. The letter has been given given below, is in Hindi. email facebook twitter google+ WhatsApp 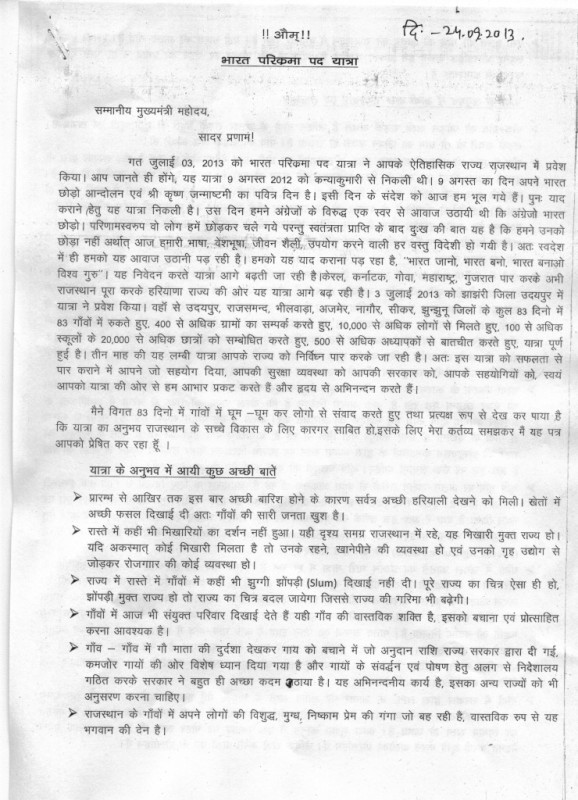