Bangalore April 17,2013: Bangalore’s cool and calm Malleshwaram saw an unusual Wednesday Morning, as a powerful Bomb exploded, injuring 16 people including eight policemen. There was a moment of panic within city, but recovered soon after high alert operations of police, media and social media activists. There was a report of another explosion at Hebbal, later found incorrect.

VSK-Karnataka was the first news centre to report such a happening at Malleshwaram this morning via twitter.

Intelligence officials told that an Improvised Explosive Device (IED) was used this morning, but were not clear on how the bomb was triggered. A large fire followed the explosion.  Several vehicles including the

police van were gutted. Karnataka’s state elections are scheduled for May 5, so a police van was posted outside the BJP branch in Malleshwaram, a crowded residential neighbourhood which also hosts several temples.

Bangalore Commissioner Raghavendra Auradkar said  the explosives appear to have been placed on a motorcycle, but so far, he said, there are no details of the sort of material that was used.

The policemen who were injured today were on duty on a day when a lot of activity was expected at the BJP office because it is the last day for candidates to file their nomination papers for the state elections.

“The injuries are not very serious and nobody is critically injured, said L Pachau, the Director General of Karnataka.

A team from the National Investigation Agency, which has expertise in handling terror attacks, has inspected the site.

Thu Apr 18 , 2013
New Delhi. April 17, 2013: Inhuman nature of Pakistan today exposed before the world community when Pak Hindus narrated their heartfelt story of atrocities at the office of the United Nations in New Delhi. Pakistani Hindus in India lead by Vishwa Hindu Parishad(VHP) demonstrated before UN Office against violation of their […] 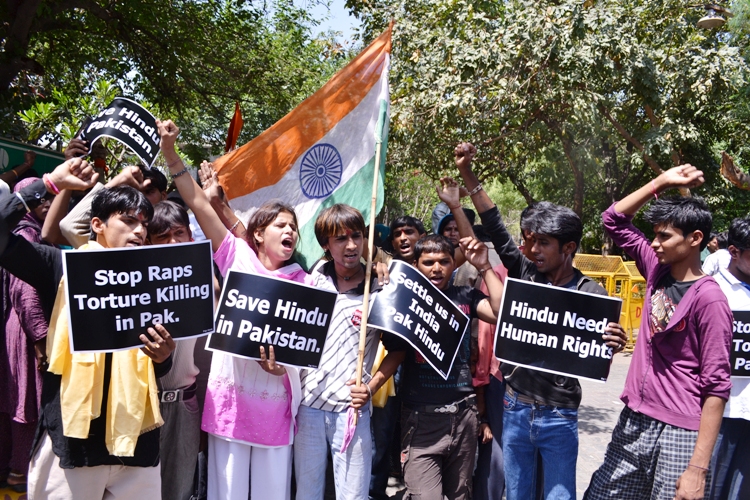