Now even Govts think, Jammu Kashmir not Bharat? Asks Dr Pravin Togadia after not being allowed to enter Jammu. New Delhi, February 21, 2013: For the officially announced public programmes & Darshan at Shri Bhagwan Raghunath ji temple, VHP International Working President Dr Pravin Togadia went to Jammu this morning. At Jammu airport itself he was stopped by the J&K state police & the Addl District Magistrate. He was handed over by them the ‘Prohibition for Entry’ order on his arrival at the airport where he was not allowed to get out of the airport for his programmes. The VHP officials & volunteers were waiting for him outside the airport, they had his medicine with them but even they were not allowed to meet him.  Making him sit there at the airport since his early morning arrival, surrounded by the gunmen, he was being sent back by the late afternoon flight.

Reacting to this, Dr Togadia said, “Indian Parliament has passed a resolution a long time back that Jammu Kashmir including the current POK are an integral part of Bharat. But as a citizen of Bharat, while I have full right to travel anywhere in Bharat, today prohibiting me from entering Jammu, the Union & State govts gave in to the hands of the separatists who keep on claiming that Jammu Kashmir not Bharat. This is a violation of my fundamental constitutional rights. The Govt stopped me from even going for the Darshan of Bhagwan Raghunathji. This is a violation of my religious rights as well. Airport comes under the Union Govt. Allowing the state police on the airport is a decision of the Union Govt. This means that both

the Union & the state Govts have connived against a citizen of Bharat for stopping him from entering Jammu. This is obviously to help the supporters of Afzal Guru who was hanged as a convict for the parliament attack. They announced revenge & both these Govts helped them achieve it by sending a VHP Working President back from the airport. Their letter says (like a future predictor): ‘Your inflammatory & provocative speeches           WILL disturb LAND & order in the state & disturb the peace in the state.’ Stone pelting by the separatists: allowed; Yassin Malik, Sayeed Ali Shah Gilani allowed anywhere in Bharat; even Rehman Malik of Pakistan to Ajmer allowed when he says 26/11 Mumbai attack was done by Bharat; but Togadia not allowed in Jammu! This is sheer discrimination on the basis of religion & it is anti-constitutional & anti-Hindu.”

Dr Togadia further added, “Yassin Malik goes to Pakistan, sits with the wanted terrorist Hafiz Sayeed; thousands of separatists play havoc by stone pelting on the J&K streets. These young stone-pelters helped by Pakistan & the youth from POK claiming to have given up Jehad are given jobs in the J&K police dept & now today the J&K police stops nationalist like me from even entering Jammu. For long Hindus in & around Jammu have been facing injustice & discrimination in education, jobs, loans & safety. Many such families would have met me to give the details. Obviously Govts did not want their horrible plight to reach the rest of the nation. For vote bank politics, they have stopped Hindus from doing Darshan, from doing public programme for charity & also from exercising their fundamental right to travel & speak. Treating me like an infiltrator or a terrorist at Jammu airport, both the Union & the State Govt have hurt Hindu sentiments. Hindus will give apt answer democratically & peacefully to this anti-constitutional anti-Hindu politics through their votes in the state and nationally 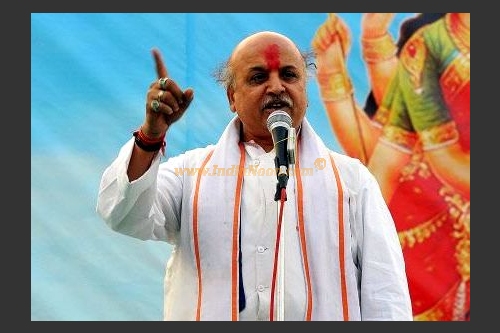