Karnavati (Ahmedabad). April 27, 2013: In Pakistan’s Kot Lakhpat jail at Lahore, Indian citizen Sarabjit Singh was brutally attacked by other inmates. He has severe head injury apart from other serious injuries. He is critical in Jinnah Hospital at Lahore. Pakistan Govt claims that it had arrested 2 inmates for attacking Sarabjit & is giving medical treatment to Sarabjit. Reacting strongly on the incident, VHP International Working President Dr Pravin Togadia demanded criminal proceedings against Pakistan in International Court for purposeful negligence, attempt to murder & Human Rights violation. Dr Togadia said, “It has come to notice that the RAW had sent an alert about probable attacks on Sarabjit & other Indians in Pak jails. But as usual Govt here did not act seriously. Now the Govt gives an excuse that it was a reaction to hanging of Kasab in Bharat. It is humbug. Even before 26/11 attack had taken place, Indians in Pak jails were brutally attacked. Sarabjit too had written many letters even before that about the brutal treatment, bad food & violation of his body rights & religious rights in Pak jail. The Indian Govt goes all out to help release some Haneef from Australian custody, some Naushad from UAE, has been conspicuously inactive about Sarabjit & all other Indians in Pak jails. Pakistan on the other hand moved courts in Bharat to release their citizen in Indian jail claiming that he was old & ill & therefore be released. Our judiciary being so kind hearted, it released the Paksitani & he is now in Pakistan whereas Sarabjit & the likes are rotting in Pak jails suffering daily torture.”

Dr Togadia said, “It is Govt of India’s failure to protect its citizens anywhere. In Bharat, the citizens face Jehadi attacks; abroad they face various types of discrimination & human rights violations. In Europe, Indian couples’ kids are snatched from them by the Govts, in Pakistan & China Indians are jailed for no fault of theirs & kept there in horrible conditions. Govt of India spends millions on ‘rehabilitating’ youth who went to POK & did Jehadi training, jails India military & Para-military Jawans based on fake complaints in Kashmir using Human Rights excuse. But the same Govt purposely neglects all others for its vote bank politics.”

Dr Togadia further demanded resignation of the External Affairs Minister Salman Khursheed for failing on every from including Pakistani attacks on Bharat, Bangla Deshi infiltration, Chinese intrusion, Sri Lankan attacks on Tamil fishermen & now not being able to protect Indians in Pak jails. He also said that VHP members along with the Hindu Human Rights Commission’s Fact Finding team should be allowed to go to Pakistan to get the firsthand account of the situation of other Indians in Pakistani jails & also about the situation of Sarabjit. The UN Human Rights Commission should accompany this team as India’s National Human Rights Commission is biased against anyone else other than Muslims. Govt of India should also immediately make the list of all Indians in Pak jails public with details of the so called allegations on them, the status of their cases & their current location / condition.

RSS pitches in to save Baji Rao Peshwa's tomb

Mon Apr 29 , 2013
INDORE: Rashtriya Swayamsevak Sangh (RSS) has pitched in to rescue the historic monument where Maratha ruler Baji Rao Peshwa was laid to rest. Situated on the bank of Narmada at Raver Khed in Khargoan district of Madhya Pradesh, the tomb is in danger of getting submerged with the increase in water level of the […] 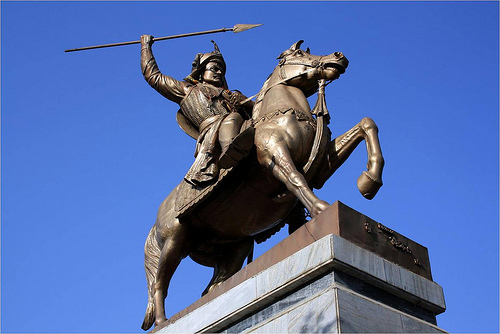