VHP Press Release
New Delhi, Aug. 20, 2013 – On August 17Sat, 2013, post-meet of the Sri Rama Janma Bhumi Temple Construction Sant High-Power Committee, an 11-member Sant Delegation called on Sri Mulayam Singhji Yadav and the Chief Minister of Uttar Pradesh Sri Akhilesh Singhji at their residence in Lucknow. The conversation with Sri Mulayam Singhji continued for about two hours. Sri Mulayam Singhji dropped hints that the Sants should call off the scheduled 84-Kosi Yatra in view of the aggressive designs of China and Pakistan. On there being no comment on this from the Sants, he said that the 84-Kosi Yatra tithis (dates) are fixed, this Yatra takes place in the month of Chaitra, and, therefore, no new tradition could be initiated. On this the Jagadguru Ramanandacharya Ven. Swami Rambhadracharyaji Maharaj made it clear that the 84-Kosi Yatra is a tradition that has been there for thousands of years with the belief that it gives deliverance to the performer from the cycle of 84-Lakh Yonis. Just as the Kamadgiri Parikrama at Chitrakoot, Govardhan Hill Parikrama at Braj Mandal, 84-Kosi Parikrama of Braj Kshetra and the Thiruvannamalai Parikrama of the Sacred Arunachala Hill in South India can be undertaken at any time of the year and no specific time-frame is fixed for it, similarly the 84-Kosi Parikrama of Ayodhya can also be undertaken at any time of the year.

Sri Mulayam Singhji told the delegation that he would make efforts, after consultations with the local authorities, so that the Yatra could take place. At no point during the conversation did the delegation have an inkling that he was against this Yatra or that any sort of ban would be imposed on it. The Sants were fully confident that this Yatra would be undertaken peacefully. But yesterday’s Government notification was surprising as to the barrier that came in between that compelled overnight Sri Mulayam Singhji and the Chief Minister of U.P. for a volte-face and change of mind and in order to stop this Yatra they clamped Section 144 of the Criminal Procedure Code (CrPC) to prohibit assembly of people in all those districts around Ayodhya that host the progressive legs of the 84-Kosi Parikrama (Circumambulation). This decision of the Government is not only unfortunate but also one of tyranny on the Hindu society with a view to playing to the gallery of Muslim Vote Bankers. There is not an iota of doubt in it that they are out to crush Hindu feelings only under pulls and pressures from the Muslim leaders entrenched in their own party.

Sri Mulayam Singhji and the Congress leaders have been telling it again and again that the court’s verdict should be awaited. When the Court verdict after 60 years has already come that where Sri Ram Lala is Virajman today that is His Birthplace, it was the duty of Sri Mulayam Singhji to mobilize the Muslim religious leaders to honour and materialize their word to “…voluntarily hand over the…” Sri Rama Janma Bhumi (Ayodhya) “…shrine to the Hindus” (vide Paras 2.1, 2.2 and 2.3 of the White Paper of Government of India). Instead of doing this, Sri Mulayam Singhji’s move to oppose and oppress the Yatra is not only a violation of the Constitutional rights of Hindus but a gag and betrayal of the Hindu society. The Hindu society is no longer ready to tolerate it. This Dharmic Yatra is being undertaken by the Sants and seers coming from all the States of the country. This circumambulatory pilgrimage would take place as scheduled as it is the directive of the Sant Fraternity.

We would request Sri Mulayam Singhji Yadav and the Chief Minister of U.P. Sri Akhilesh Yadavji that before going ahead armed with their state machinery to crush the Dharmic feelings of the Sant Fraternity they should review their decision. If they do not do this then the Hindu society, in order to defend its rights, should remain ready to wedge a struggle through peaceful and democratic way.

Wed Aug 21 , 2013
Madurai Aug 21: RSS Sarsanghachalak Mohan Ji Bhagawat tied Rakhi to Dr. Srimathi Nachiyar, Director of Aravind Eye Hospital at Madurai today. In his speech he said, “Rakhi is the Protection of our Dharma, Culture and people that ensures a happy national life.  Let us commit to do it by accepting […] 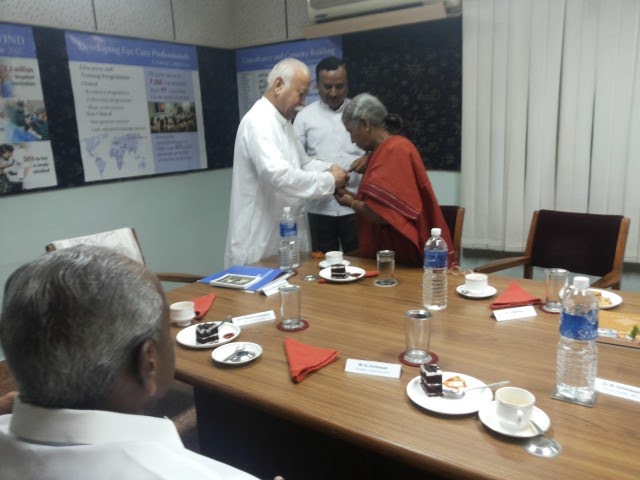