Skip to content
By Kiran Kumar S, Bangalore
July 08-2013:
After any terror attack in India, we can almost predict how the “seculars” (read as anyone not associated with BJP or Sangh ideology) react. Here are some examples to prove the point.
Terror attack 1: The 26/11 attack on India by Pakistani terrorists.
After the dastardly terror attack on Mumbai in 2008, which was nothing but a well planned and funded proxy war waged by Pakistan on Indian civilians through brainwashed Jihadi terrorists, Congress party’s General Secretary Digvijaya Singh released a book. RSS ka Shadyantra, 26/11 (RSS conspiracy, 26/11).
Digvijaya Singh, an ex CM of Madhya Pradesh, and the teacher of Rahul Gandhi, even went on to say that the Mumbai ATS chief Hemant Karkare had called him, hours before he was killed in the terror attacks, to tell him about threats he had received for probing Hindu extremists and their terror links.

No wonder investigators feel disheartened when the ruling Congress party’s top leader openly misleads the nation this way. It was well established right from the start that the terrorists were Pakistanis. Indian and American courts clearly proved the facts in the coming days resulting in convictions and even the execution of Ajmal Kasab, the lone Pakistani Jihadi terrorist caught in the attack.
So it was not RSS, but Pakistani Jihadi Terrorists who did it.
But after legal worries, the book writer Aziz Burney apologized on the front page of his newspaper Rashtriya Sahara on Jan 29, 2011.
But has Congress or Digvijaya Singh apologized for blatently misleading India? I don’t recall any.. I am not surprised also. Here’s why.
Terror attack 2: The April 2013 attack near BJP office in Bengaluru.
And how did Congress leaders and supporters react? See below. Congress leader and Member of Parliament A H Vishwanath has alleged that Rashtriya Swayamsevak Sangh (RSS) is behind the bomb explosion in Malleshwaram near the BJP office in Bangalore.

Senior Congress leader Siddaramaiah raised suspicions of BJP’s hand in a bomb blast, that occurred near BJP office in Bangalore on Wednesday.

Speaking to press persons on the sidelines of a party workers meet of Krishnaraja constituency, in Mysore, he said that there were chances of BJP colluding with anti-social elements to “plant a bomb” near its office, “for electoral gains”.

Here also, the orgasmic premature verdicts from Congress camp turned out to be totally false. The 2013 Bengaluru blast was linked by the probing police to Al Ummah, a banned Islamic terrorist organization from Tamil Nadu. Nearly 12 terrorists are arrested so far and all of them happened to be Jihadis, who have nothing to do with RSS or BJP.

The Bangalore police have identified the person who probably parked the bomb-laden motorcycle near the BJP office in the city on April 17 as Panna Ismail, a former member of the banned Tamil Nadu terror outfit, Al Ummah. He had jumped bail in mid-March in a terror case in Tamil Nadu. Sixteen people, including 11 policemen, were injured in the blast.

In the court documents filed by the police, Ismail, a resident of Tirunelveli, Tamil Nadu, has been named in the list of 12 persons accused of carrying out the blast. While documents say that Ismail and two other Tamil Nadu men, Bilal Mallick and Fakruddin, are at large, the police have shown the arrests of nine others. Both Mallick and Fakruddin are linked to Al Ummah.

So yet again, Congress supporters and top leaders got foot in the mouth. Worse, no apologies to India for misleading yet another terror attack.

Terror attack 3: The May 2013 terror attack on a Congress election convoy in Chhattisgarh.

This was more bizarre than the earlier ones. Here, within minutes, tweets and messages were floating on how BJP government failed, how Raman Singh the CM must be dismissed and so on. Lots of drama unfolded with Sonia Gandhi even rushing with lot of top leaders, issuing statements and then press giving lot of anti BJP sermons.

And after the initial high drama after this unfortunate incident, completely politicizing the terror attack to blame it on BJP, NIA found top Congress leaders hand-in-glove with terrorists. The same Congress workers who were holding banners “Raman Singh Sharam Karo” (Shame on him), were no where to be seen when NIA confirmed Congress conspiracy behind Chhattisgarh naxal attack.

So yet another terror attack, this time by Communist Maoists, back fired on Congress after all the initial shouting against BJP. The attack was established by NIA as a handiwork ofCommunist Terrorists hand-in-glove with Congress top leaders of Chhattisgarh. Investigation is still going on.

Even before the NIA investigators are in Patna, already the “secular” nonsense to blame BJP, Modi and Sangh started after this terror attack. See some selected ones (thanks to friend Ajit Gupta for pointers) It’s incredible how many of these “analysis” and “views” match with the Congress ring leader Digvijaya Singh’s own RSS and BJP phobia.

He “warned” Nitish Kumar in particular and non-BJP ruled states in general, to be “careful”.

If you have carefully observed so far, you won’t be surprised if this Bodhgaya attack may also eventually turn out to be some Jihadi terrorist hand, and nothing to do with RSS or BJP.

When will these shameful “seculars” grow up? That too on matters of significant national interest like terror attacks? 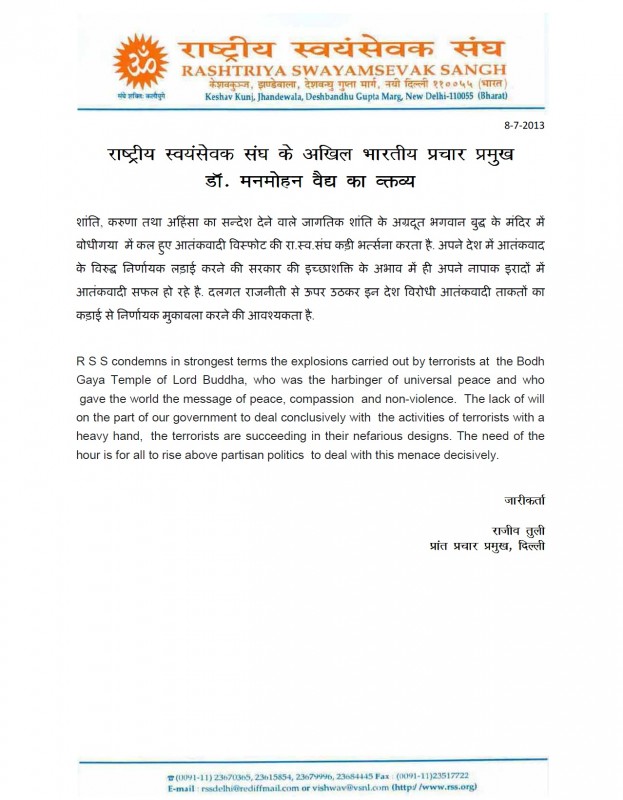