The Supreme Court took yet another firm step recently to cleanse politics and to de-criminalise the country’s legislative bodies when it directed trial courts hearing cases concerning corruption and serious offences against MPs and legislators in the states to complete the trial within one year of framing of charges. In an interim order, the Bench of Justices R.M.Lodha and Kurian Joseph said where sitting legislators are facing corruption cases and other serious offences, “the trial will be completed expeditiously on a day-to-day basis and in no instance later than one year from the date of framing of charges”.

This is the second major directive from the apex court after its path-breaking verdict in July, 2013 ordering disqualification of all MPs and MLAs soon after their conviction in heinous cases. Through this judgement, the court stopped MPs and MLAs from merrily continuing in office after filing an appeal against the lower court’s order as provided for in Section 8 (4) of the Representation of the People Act. The court struck down this provision in the RP Act, which had been grossly misused by elected representatives with criminal backgrounds. Exploiting the justice system which is painfully slow, legislators convicted of crimes like murder, rape and dacoity were known to complete their terms in Parliament and state legislatures, return to these legislative bodies when fresh elections were held and even hold key portfolios in the government at the Centre and in the states. All they had to do was to file a criminal appeal in a High Court within the stipulated time and the cases would drag on for 10 or even 15 years.

The mischief lay in Section 8(4) and this remained on the statute book for decades despite strong and persistent recommendations from the Law Commission of India, The Election Commission and a host of other commissions and committees including the National Commission Commission to Review the Working of the Constitution (NCRWC), which was headed by the former Chief Justice of India Mr.M.N.Venkatachalaiah. But the political class failed to heed to the suggestions and proposals for scrapping Section 8(4) because almost all political parties had legislators with criminal backgrounds and they did not want them to be unseated. Secondly, since criminal cases dragged on endlessly and the rich and powerful found a dozen ways to stall the trial in such cases, criminals roamed around the corridors of power and Parliament with impunity.

The Supreme Court struck the first major blow against criminal-legislators when it declared that Section 8 (4) was illegal. It said henceforth, upon conviction legislators would lose their seats. Lalu Prasad Yadav became the first politician to be hit by this ruling. He lost his seat in Parliament after this judgement although the Manmohan Singh Government was all set to bring in an ordinance to nullify the court’s verdict.

The latest order of the court directing that the trial in cases involving MPs and MLAs be completed within one year will have an impact on many persons with such background who are likely to contest and succeed in the coming Lok Sabha election. Although the distribution of tickets is still on, one can already see that a large number of persons with criminal records have been given tickets by many political parties including the Congress, the BJP, the Samajwadi Party and the Bahujan Samaj Party. The trial courts are now mandated to complete the trials within one year. Therefore, all persons who stand accused of heinous crimes and who get elected to the new Lok Sabha will not have the luxury of seeing prolonged trials. Secondly, if they are pronounced guilty, they will immediately forfeit their seats in view of the Supreme Court’s Verdict last year.

Following the latest Supreme Court order directing speedy trial of such cases, ADR and NEW reported that the 162 MPs were involved in 306 criminal cases and that 76 of them stood charged with serious crimes like murder, attempt to murder and kidnapping. However, all these MPs were completing their Lok Sabha terms without hindrance because the cases were pending in court. These organisations said that some of these cases were pending for over 20 years. On an average, the pendency was for about seven years. They found a case of murder in which a member of the present Lok Sabha is an accused, dragging on for close to three decades while another murder case against an MP in Uttar Pradesh was in “progress” for 25 years. One case against an MP facing the charge of rioting and theft was on for 28 years. Providing a party-wise break up, the two organizations said that Jharkhand Mukti Morcha (JMM) MPs had 69 criminal cases against them followed by the BJP (55 cases), the Samajwadi Party (34 cases) and the Congress (30 cases). One MP belonging to JMM from Palamau, Jharkhand had declared 69 counts of serious cases against himself.

The court’s order last week came in the light of this frightening statistical analysis and the recent report of the Law Commission on Electoral Disqualifications. The Commission’s report on this issue was consequent to a direction by the Supreme Court last December. In this report, which was finalized last month, the Law Commission said that disqualification upon conviction had “proved to be incapable of curbing the growing criminalisation of politics, owing to long delays in trials and rare convictions. The law needs to evolve to pose an effective deterrence and to prevent subversion of the process of justice”. It therefore favoured disqualification of MPs and MLAs at the stage of framing of charges by the trial court. It said the stage of framing of charges “was based on adequate levels of judicial scrutiny, and disqualification at the stage of charging, if accompanied by substantial attendant legal safeguards to prevent misuse, has significant potential in curbing the spread of criminalisation of politics”.

Further, once the charges were framed and the legislators were disqualified, the Commission felt that the trial must be speeded up. It said for charges framed against sitting MPs and MLAs, the trials must be expedited so that they are conducted on a day-to-day basis and concluded within a one year period. It is of the view that if the trial is not completed within a year, the tainted legislator would stand automatically disqualified. Alternately, the rights, remuneration and perks of the MP or MLA could be suspended. The Commission also proposed some safeguards to prevent persons in power from filing false charges against political opponents in the run up to en election to the state assembly or parliament. It has also recommended enhanced punishment of two years in jail for persons who give false affidavits while filing nominations in an election.

This recommendation of the Law Commission must be seen in the light of the opinion of several other commissions and committees. For example, the Election Commission recommended 17 years ago that conviction by a trial court was sufficient to attract disqualification “and even those released on bail during the pendency of their appeals against their convictions are disqualified from contesting elections”. The NCRWC recommended that the election law be amended to bar any person charged with an offence punishable with imprisonment up to five years, from contesting elections to parliament and state assemblies. Further, it said any person convicted for heinous offences like murder, rape, dacoity and smuggling must be permanently barred from contesting elections. The Second Administrative Reforms Commission headed by Mr Veerappa Moily, a member of the Union Cabinet, recommended that Section 8 of the Representation of the People Act, 1951 be amended “to disqualify all persons facing charges related to grave and heinous offences and corruption”, with the modification suggested by the Election Commission.

However, none of this had any effect on the political executive and the UPA Government made a futile bid through Law Minister Kapil Sibal last year to up turn the Supreme Court judgement which said convicted MPs and MLAs would stand disqualified even if they appealed against their convictions. The Manmohan Singh Government assured all political parties that it would amend the RPA Act, 1951 to help criminal politicians, some of whom were keeping the government alive through their support in the Lok Sabha. Sibal, who piloted this obnoxious piece of legislation even felt emboldened to advice the judiciary that it should be “extremely careful” while giving rulings because there was a negative perception in the country that all politicians were criminals and that the courts were enthusiastic to prove this to be right. Sibal also made the laughable claim that the political class was the most accountable class in the country and that the politicians were accountable to parliament, to the Election Commission, to the country and to the people.

Fortunately, no one is listening to Sibal’s rant against judges and on behalf of criminal politicians, least of all the judiciary. The Supreme Court, in its interim order last week on the PIL filed by Public Interest Foundation has partly accepted the suggestion of the Law Commission and ordered expeditious trial of cases pending against MPs and MLAs. Last year the court declared that legislators would stand disqualified once they are convicted by a court in a serious criminal case. The Law Commission is now suggesting that the disqualification should kick in the moment the trial court frames charges. We must now await the court’s final judgement in this PIL and hope that it will finally purge our legislatures of criminals.

Sun Mar 30 , 2014
INDIA HEALTH LINE Launched in DELHI To Offer FREE Consulting by Specialist Doctors to the Poor & Needy Delhi, March 30, 2014 A much needed social service in the socio-medical field has been launched by eminent doctors. INDIA HEALTH LINE national launch took place in New Delhi in presence of eminent […] 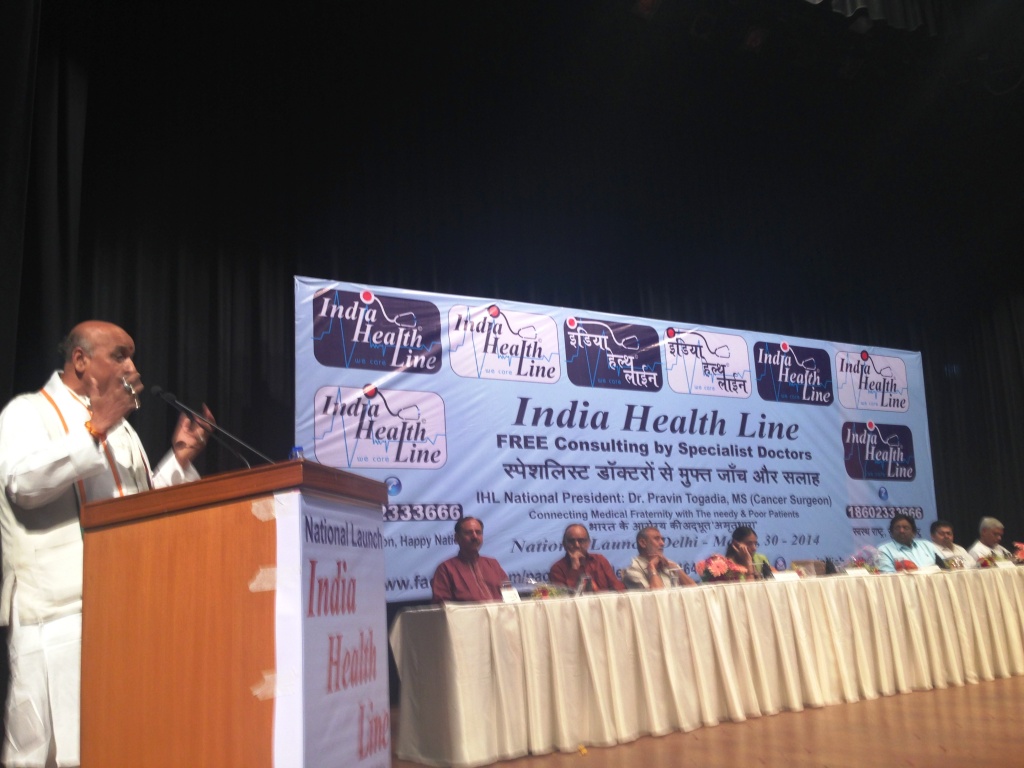