Arun Shourie interacts with Scholars, Writers and Intellectuals in Bengaluru

While speaking about the background that made him to write ‘Eminent Historians’ he exposed the intellectual dishonesty of Marxist historians of not referring the original sources and lack of detailed study. Cautioning on the imitation of trend set by Marxist historians he said that “We should not repeat the mistakes of Marxists. Verbal assaults can never be a substitute for serious research. Capturing institutions and doing the counter of what they did, verbal exaggeration or verbal assault will lead us nowhere. We have to nail it by facts. We have to track and follow their citations, examine the facts to counter their point of view. Marxists are on their way out and we should not follow their way out.”

Answering a question on his enormous scale of writings backed by vast research he said “We should rely on original sources and read them in great detail; one has to persevere and put effort to bring out the facts”. Expressing concerns over quality of research he said “Standard of research in India is very low. Anyone who has worked on a subject for two years would be called a subject expert. But more serious research should happen and more scholars should come forward to work without losing the focus.”

Tue Dec 2 , 2014
Bengaluru December 02: Yashas Nataraj, 31, an IIM-B alumnus with a master’s from Singapore, joined IT Milan 18 months ago. Since then, there has been no looking back. Like him, around 2,200 techie swayamsevaks have joined IT Milans in the city since 2001 when the first shakha was launched by […] 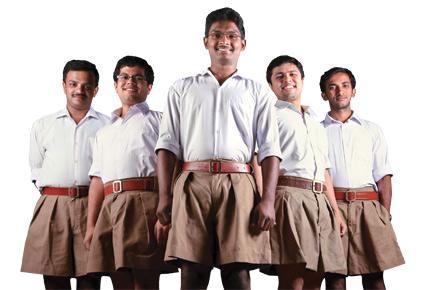