He was talking in a seminar on a subject ‘The Democracy, Development and National organized by Bharatheeya Vichara Kendram.

It cannot be expected that all problems can be resolved even if our Constitution is better. We have all ready the beneficiary of the Bad implementation from last 6 decades. it is to be implemented if a better thing is written. We have to realize that in the same decade of our Independence, Japan thrashed by Atom bomb and Israel got its ancestral birth land back.

Today what is the position of all these three nations? India is still in a position were 30% in poverty,35% in illiteracy and 65% in Un-hygienic conditions. Our productive sector is totally collapsed. China is a big threat not in boarder issues, but in our local market also. Our mutual trade is 70M dollar. Among this 60M is pure import from substandard products of China.10b Indian exports is the raw iron Ore.

Our Law and Order is also fully turned up and down. Delhi became the world capital of Women molestation. Our internal Security is in Danger. Indian Mujaheddin formed their own centers in all states, even in Kerala also. China is a big threat to all Himalayan frontiers. India will lose the controle of Siachin if China got fully access to Daulathabad. Indian Administrators should take Putin as their Role Model that how to tackle Islamic Terrorism. Here in India poverty level increased. India needs a new ministry.

Ram Madhav also said that there is no plan for political solution for  Mathura and Kashi. Left parties had lost their credibility and they accused Narendra Modi as a pro monopolist, to cover up their own business interest.

Asha Menon a famous literary figure inaugurated the function and said firmly that those politicians who can’t realise and repute our Tradition and Dharmic culture should go in Thrash Bin. Even our former administrator who tried to “Discover India” can’t realize our Nationality with Dharmic Value. Prof K.K.Ramesh of IIM Kozhikode presided over the function.

Thu Mar 27 , 2014
article by Ram Madhav, RSS senior functionary March 27, 2014 Varshney’s Hindu Nationalists are True Universalists & Humanists Dr. Ashutosh Varshney, like many of his colleagues is a known professor of distortion. In his latest article ‘Modi the Moderate’, published by the Indian Express on March 27, 2014, Varshney amply demonstrates […] 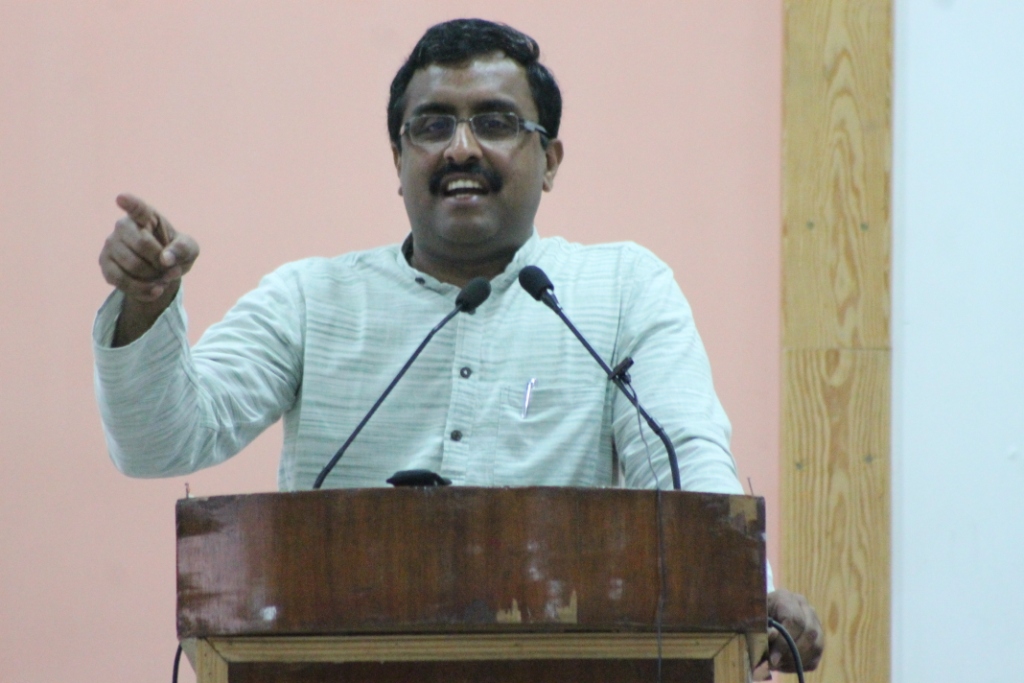