Bharuch, Gujarat: The 129th meeting of the Bharatiya Mazd-oor Sangh (BMS) executive was held in Bharuch, Gujarat, from January 4 to 5. The meeting decided to take up some issues prominently in near future. On top of the agenda is social security to all workers, amendment in MGNREGA Law, control on price rise and removal of multinational companies from the country. Detailed discussion was held on the agenda of 17th national convention to be held in Jaipur. The agenda on top of the meeting will be covering all the workers in social security schemes and march towards the villages. The convention will be held from February 21 to 23 at Suraj Maidan of Jaipur. Other prominent issues which will be taken at the convention are effective implementation of the labour laws, basic minimum wages to be raised to Rs 10,000 per month with index, abolition of contract labour system and amendment in the Contract Labour Law, curb on disinvestment in public sectors, reign in foreign investment in retail trade, control on price rise, prevention of unemployment, restrain Police interference in labour agitations and the scheme workers like Anganwadi, Aasha, Mid-day Meal worker, Jasoda, etc. be declared Government employees.

The meeting was presided over by national president Shri CK Sajjinarayan. Speaking on the occasion he expressed satisfaction over the overwhelming response that the BMS received during the implantation of its two prominent programmes (organise the unorganised and march towards the villages) decided at Jalgaon Meeting last time. Shri Sajjinarayan said very successful programmes were organised even at the block level. He said many joint programmes were also carried out by the BMS along with other unions. He said the coming decade would be full of agitations for the workers. Therefore, the senior workers should work as guide without taking any big responsibility.

National general secretary Shri Baijnath Rai said the BMS would focus on strengthening the organisation in 2014 and in the year 2015 the organisation would show its strength all over the country.

Thu Feb 6 , 2014
New Delhi Feb 06: Senior RSS functionary  Dr Manmohan Vaidya said that allegation by a media about Aseemanand ji’s statement is totally baseless. “All of it is a lie, imagination. Such acts will not be done by RSS. The Sangh does not tell someone to explode bombs; its job is […] 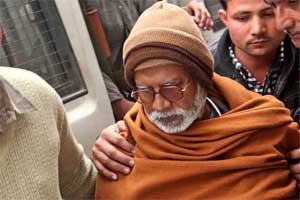