Langkao is a village nestled in the serene Himalayan ranges situated in the North Eastern state of Manipur. Hundred years ago, on 26 January 1915, Rani Ma Gaidenlu was born in this village. She was bestowed with great spiritual powers. She had realised and visualised the threats posed by the British empire and Christian missionaries to the Dharma, culture and tradition of Bharat. In 1928 Rani Ma, accompanied by her brother Hepau Zadonang, visited Guwahati and met Mahatma Gandhiji to have a serious discussion about these threats. Immediately after that, just at the age of 13, she plunged into an armed rebellion along with her brother Zadonang against the British empire. Zadonang, along with thousands of followers, launched a massive revolt against the British for independence. He was captured on 29 August 1931 and condemned to death by hanging using fictitious accusations. After the death of Zadonang, leadership of the rebellion went into the hands of Rani Ma Guidenlu. Rani Ma mobilised the local people living in the hills and took on the British. Unfortunately she too was captured in 1932. She was just 16 at that time. The British had sent her off on life imprisonment.

Shri Jawaharlal Nehru had visited Rani Ma in Shillong jail in 1937 and pronounced her as the ‘Rani’ of the entire North Eastern hills. She was set free only after the Independence in 1947. Her reputation as Rani Ma continued afterwards. Despite harsh jail term for 15 years, Rani Ma had not rested after the release. She got engaged in struggle against the religious conversions in the NE hills and the anti-national activities of the Naga National Council. She had to live underground because of that between 1959 and 1966. After prolonged conflicts she breathed her last on 17 February 1993.

The Government of Bharat felicitated her with Padma Bhushan in recognition of the yeomen services she had rendered to the freedom movement and protection of the people living in the NE hills.
It is a matter of pride to all of us that the activists of Vanvasi Kalyan Ashram have made enormous efforts to carry the story of struggle and sacrifice if Rani Ma to the nook and corner of the country. Followers of Rani Ma have instituted Zaliang Rang Harakka Association in her sacred memory. They decided to celebrate Rani Ma’s birth centenary from 26 Jan 2014 to 26 Jan 2015. Activists of Kalyan Ashram will join them in the celebrations to make them a success.
We commend the initiatives of the Zaliang Rang Harakka Association and Vanvasi Kalyan Ashram. We welcome these efforts to take the inspiring life stories of the heroes of the North East to rest of the country. It is our national duty to familiarise our countrymen about the inspiring lives of those great national leaders born in the North East. We call upon the patriotic countrymen to accord national honour to the heroic and inspiring life of Rani Ma by extending wholehearted support to all the activities being undertaken as part of her birth centenary. 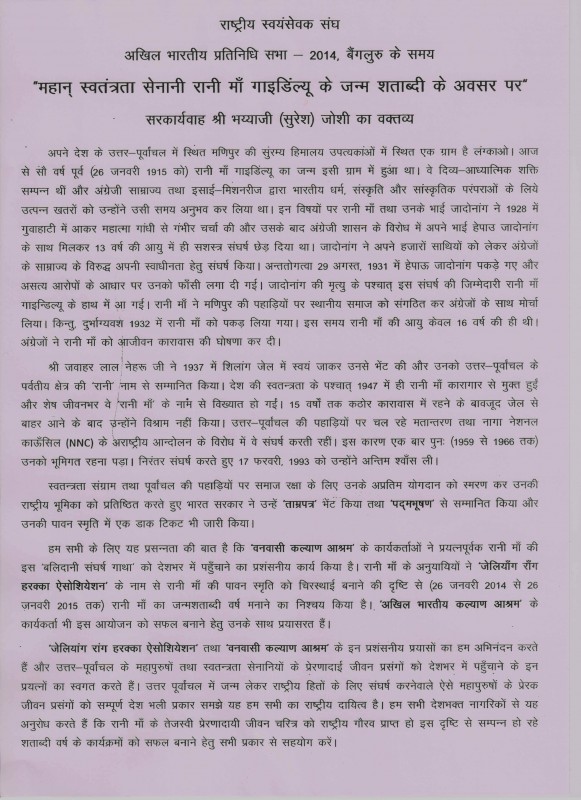